Members of West Michigan's influential DeVos family have given $800,000 to a group focused on unseating Democratic U.S. Sen. Gary Peters, according to new fundraising disclosures.

Democrats alleged the contributions show Peters' GOP opponent, Farmington Hills businessman John James, will stand with U.S. Secretary of Education Betsy DeVos and her family. But Republicans countered that the contributions revealed key donors see how vulnerable Peters is this year in his re-election bid. 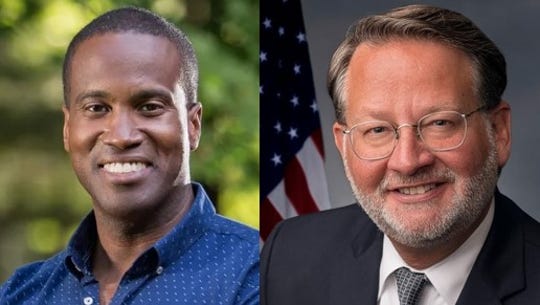 A Jan. 3-7 poll by Glengariff Group of 600 likely Michigan voters showed Peters leading James 44% to 40% in a survey with a margin of error of minus-plus 4 percentage points. Peters is one of two senators running in states that President Donald Trump won in 2016, and first-term senators normally face a challenging re-election campaign, Glengariff's Richard Czuba said.

Six members of the DeVos family gave a total of $800,000 to Better Future MI Fund, a super political action committee, on Dec. 9. Under federal election law, super PACs can raise and spend unlimited amounts of money trying to persuade voters as long as they act independently of the candidates' campaigns.

Candidates face limits on how much they can raise from individual donors for their campaigns.

Asked about the contributions, DeVos family spokesman Nick Wasmiller said family members are "committed to active involvement in their communities."

They make political contributions and philanthropic contributions to "advance opportunity for all, preserve and enhance individual freedom, and encourage a fair and open economy that rewards hard work, encourages innovation and recognizes the important value of each person," Wasmiller added.

Better Future MI Fund formed Oct. 31, according to a filing with the Federal Election Commission. The super PAC had to file its first campaign finance disclosure, covering the last two months of 2019, on Jan. 31.

The super PAC's only contributors were, at that point, from six members of the DeVos family. Daniel and Pamella DeVos, listed as executives with RDV Corp., each contributed $200,000. Cheri DeVos and her husband, Steve Ehmann, each gave $100,000. And Doug and Maria DeVos each gave $100,000. 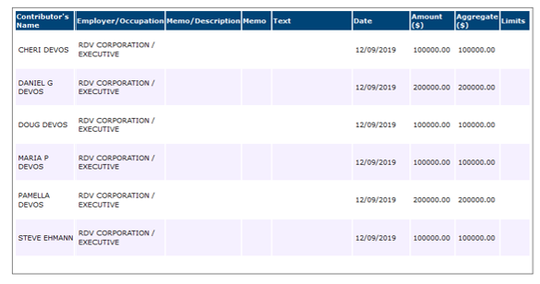 Tori Sachs, who served as campaign manager for James during his 2018 race for the U.S. Senate, is now consulting for Better Future MI Fund. Sachs declined to discuss the DeVos family contributions on Thursday, saying she wouldn't comment "on fundraising or strategy."

Dick DeVos' wife, Betsy DeVos, is secretary of education under President Donald Trump. She's received heavy criticism from Democrats and some teachers over her support of charter and private schools. Betsy DeVos is not making contributions to candidates while serving as education secretary.

The DeVos family has traditionally given the most political contributions of all Michigan families. For the 2018 election, DeVos family members combined to spend $11.3 million on federal and state-level contributions, according to the nonprofit Michigan Campaign Finance Network.

Elena Kuhn, a spokeswoman for the Michigan Democratic Party, blasted the DeVos contributions to the pro-James super PAC.

“It’s easy to see why the DeVos family is already spending nearly a million dollars to fully throw their support behind John James — they know that he would stand with Betsy DeVos in boosting for-profit colleges and undermining our public schools instead of fighting for Michigan students, educators and hard-working families,” Kuhn said. 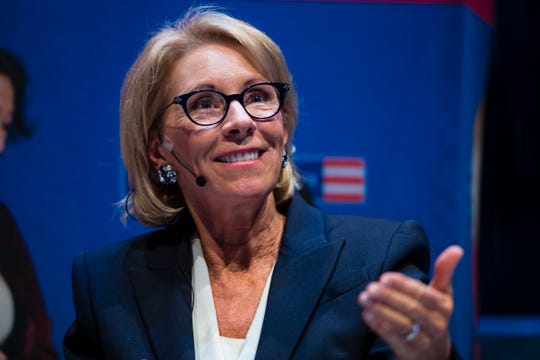 As of the end of 2019, outside groups — organizations acting outside of the candidates' campaigns — had already spent $3 million on Michigan's 2020 U.S. Senate race, according to a Detroit News analysis.

Senate Minority Leader Chuck Schumer, D-New York, has been "funneling millions of dollars to Michigan to try and protect a vulnerable incumbent," said Abby Walls, spokeswoman for the James campaign.

"Democrats recognize that a 30-year career politician will have a tough time against a combat veteran and job creator like John James," Walls added.

James challenged Sen. Debbie Stabenow, D-Lansing, in 2018 and lost by 6.5 percentage points. Individual members of the DeVos family contributed $450,000 to the two top super PACs backing James in that race, ESAFUND and Outsider PAC, according to campaign finance disclosures. The total doesn't include corporate contributions from entities tied to the family.

“There have been a number of signs that both Michigan’s GOP leadership but also national leadership sees John James as a rising star and someone who could flip a Senate seat," said Sellek, who has previously worked with Republicans.