Biden is down, Bernie Sanders is up and Bloomberg has emerged as a moderate alternative, riding slight gains in national polls and among black voters

Michael Bloomberg entered the Democratic presidential race late and tore up the traditional playbook on the theory that he would emerge as the centrist alternative if Joe Biden faltered and a progressive was surging.

So far, that plan is holding up.

Biden is down, Bernie Sanders is up and Bloomberg has emerged as a moderate alternative, riding slight gains in national polls and among black voters, a crucial constituency to win the Democratic nomination.

“You can doubt whether he can get from here to there, but so far where he’s gotten to, he’d have to be pleased at this moment,” said James Carville, a top strategist for Bill Clinton, who has complained that Democrats are moving too far left with their support of Sanders. “The theory of their case is playing out.” 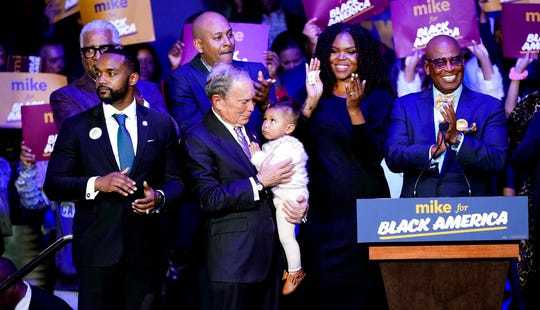 The next few weeks will prove whether Bloomberg and his self-funded campaign can keep up that momentum or will face a harsher verdict as voters finally see his name on ballots starting on March 3, Super Tuesday.

For Bloomberg to win, he would have to convince a party filled with young people, women and minorities that their best choice is a 78-year-old former Republican with ties to Wall Street right at the moment that he is facing increased scrutiny of his past record.

This week opponents found old comments by Bloomberg defending his stop-and-frisk policy as New York mayor, seeming to blame the drop in redlining – the practice of denying loans to minorities – for the 2008 financial crisis, and likening Russian President Vladimir Putin’s annexation of Crimea to the U.S. annexation of California in 1850.

A debate that reveals a prickly Bloomberg under fire from other Democrats for past comments or for “buying” the election could cause him to stumble and lose momentum, said Elaine Kamarck, a senior fellow at the Brookings Institution who wrote a book about the presidential nominating process.

There’s also no guarantee that support that falls away from other candidates naturally goes to Bloomberg, she said.

And with Pete Buttigieg and Amy Klobuchar surging from the second tier with strong performances in Iowa and New Hampshire, voters looking for an alternative to Biden may find the younger candidates more attractive, said veteran Democratic strategist Joe Trippi.

Bloomberg would need to win over voters looking for a candidate best positioned to beat Donald Trump – the No. 1 factor for many Democrats – at a time when many in the party are supporting Sanders, a candidate who in many ways seems to be the least electable.

“Money is not everything or historically it has not been everything. So there’s no guarantee that this will work,” Kamarck said. “If another moderate emerges, they could certainly give him a run for his money – even given all the money he has.”

If Bloomberg is on stage for the next debate on Feb. 19 in Las Vegas, Nevada, it would be a bit of a mixed blessing for a candidate not known for his warmth as a campaigner who hasn’t run for anything since his last mayoral re-election campaign in 2009. He needs just one more national poll showing him with at least 10% support to make the stage.

Biden said Thursday that he expects Bloomberg’s record will be examined, and hinted he’s eager to address those issues on a debate stage with Bloomberg. He also suggested that Bloomberg’s record needs more vetting by the media and by voters.

“It’s amazing every single thing I’ve said for the last 40 years has come up and I’ve answered them all,” he said on ABC’s “The View” when asked about Bloomberg. “We’re just now getting to the place where we’re looking at people’s records.”

Bloomberg has said he’s looking forward to debating his rivals and is preparing in the event he qualifies.

Senior Adviser Howard Wolfson told staff in a conference call this week that their internal tracking data showed that Bloomberg had pulled “very narrowly” into a lead in Super Tuesday states. But the campaign has not shared specifics.

Bloomberg decided against entering the race when most of the others did. He announced his candidacy Nov. 24 when he said he didn’t think anyone in the field would beat Trump. He’s skipping the four nominating contests in February and focusing on states voting in March when more than 60% of delegates needed for the nomination are awarded.Biden, who finished fourth in Iowa and fifth in New Hampshire, insists he will recover with the diverse electorates in Nevada, which holds a caucus on Feb. 22, and South Carolina, whose primary is Feb. 29.

But only Sanders, Bloomberg and fellow billionaire Tom Steyer will have the money to really compete across the Super Tuesday states, Trippi said. Buttigieg and Klobuchar have momentum, but not likely enough to allow them to compete in many states, he said.

After Iowa, Bloomberg doubled his advertising and said he would increase his campaign staff.

Bloomberg’s campaign said it has also opened more than 150 offices with 2,000 staffers in 43 U.S. states and territories, plus 400 workers at its headquarters.Strategist Charlie Cook said under normal circumstances, he wouldn’t expect Democrats to nominate a candidate like Bloomberg who is out of step with many in his party. But this is not a normal year, he said.“He may not be warm and fuzzy, but Democrats are not looking to fall in love this time,” Cook said of Bloomberg. “They’re looking for someone who won’t lose.”