The White House defended President Donald Trump on Friday after an Associated Press report that he stretched the truth in his State of the Union account of a formerly homeless veteran who turned his life around with a job at a company that is taking advantage of Opportunity Zone tax breaks.

The AP report found that construction worker Tony Rankins, who was introduced to a standing ovation at the State of the Union, doesn’t work at a site taking advantage of the breaks and has never done so. In fact, the hotel renovation job that he credits for his comeback two years ago isn’t even in an Opportunity Zone. 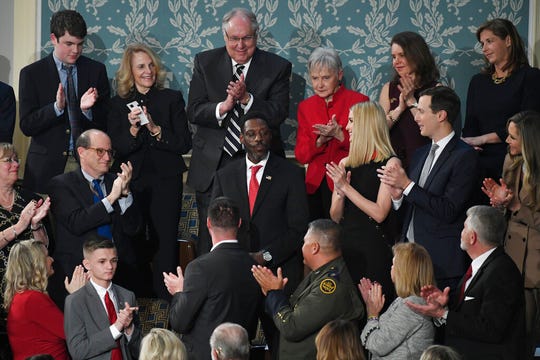 In this Feb. 4, 2020, photo, Tony Rankins, center in red tie, receives a standing ovation during the State of the Union address to a joint session of Congress on Capitol Hill in Washington. Rankins, a formerly homeless, drug-addicted Army vet, got the standing ovation after President Donald Trump described how he turned his life around thanks to a construction job at a company using the administration's "Opportunity Zone" tax breaks. (Photo: Susan Walsh, AP, File)

White House spokesman Judd Deere said the AP took “the disgusting path of trying to distort the story of a man and a company who are benefiting from a monumental program,” noting that Rankins’ employer invests in Opportunity Zones and Rankins currently works at a Cincinnati building in a zone. AP reported that, but also found that the building is not taking advantage of the breaks and his employer has only one project using them.

“Tony found a company that invests in Opportunity Zones and he is now drug free, reunited with his family, and helping to rebuild his community and his own life,” Deere said. “The theme of the President’s speech was ‘A Great American Comeback’ and Tony Rankins is part of the comeback.”

The Opportunity Zone program passed as part of Trump’s 2017 tax overhaul offers investors big savings in capital gains taxes if they put money into more than 8,000 poor neighborhoods designated by the Treasury Department as neglected and needing the help. Trump has touted the program in several speeches as an example of how he is helping African-Americans.

Rankins’ story was one of several State of the Union introductions that appeared to be overtures to black voters, and the second to be shown to be less than truthful. Trump announced that a Philadelphia fourth-grader would be getting a scholarship that would allow her to transfer from a “failing government” school to a charter school of her choice. But The Philadelphia Inquirer reported that she had already been attending a charter school for months.