California billionaire Tom Steyer is aiming for a Michigan presidential primary upset after placing far behind other Democrats in Iowa, New Hampshire.

The 62-year-old hedge fund manager didn't qualify for Wednesday's debate in Las Vegas. But he is making a major play for African American voters in upcoming states like South Carolina and Michigan, having spent over $100 million on his campaign. 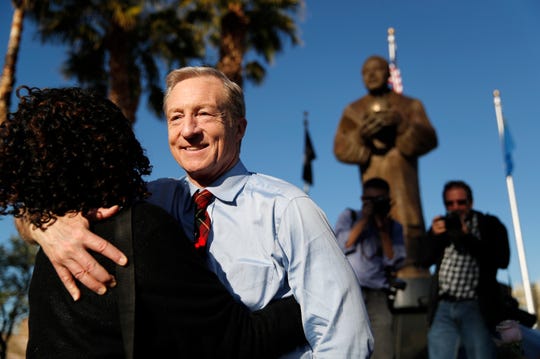 While former Vice President Joe Biden has had early support among black voters, Steyer is trying to pry them away by vowing to get reparations for slavery in part by forming a commission.

Steyer has confidence he will perform better in Nevada and South Carolina.

"These are the first two states with diverse populations that reflect the racial and ethnic diversity of America and the diversity of the Democratic Party," he told The Detroit News this week.

"It's a critical opportunity to show how you can put together the diverse coalition to beat Donald Trump," he continued. "If you can't do that, you can't win."

Steyer has spent his part of his personal wealth trying to have an influence in Michigan. He formed a political action committee called NextGen America that helped register younger voters in Michigan as a way to get more Democrats elected.

Steyer is mostly known in Michigan for injecting money into 2018 statewide campaigns and changing the state’s alternative energy policy by threatening to mount a ballot initiative that would double the state's renewable energy mandate.

DTE Energy and Consumers Energy agreed to generate 25% of their energy from renewables by 2030, up from a 15% state mandate set to take effect in 2021. It came after Steyer spent almost $2 million collecting enough signatures for a potential ballot initiative requiring Michigan providers generate at least 30% renewables like solar and wind by 2030. The change in state policy happened without a vote of the people or the Legislature.

Among Steyer's biggest issues have been reparations and climate change.

Steyer said he is "the only person running for president who has been openly and consistently in favor of reparations." Other candidates have backed forming commissions to study reparations as he has.

He also has advocated for major reductions in carbon emissions as a way to reduce climate change.

"I'm a huge proponent of climate change," Steyer told The News. "People say it's a science issue. I say it's a human issue. It's actually about humans, and there is a huge racial disparity and racial injustice in climate impacts.

"It seems the only way pundits and D.C. people think is horse race coverage," Steyer said. "I think justice will intrude on the horse race."

In the last two polls conducted in South Carolina, Steyer placed among the top three Democratic candidates. It would be his best result in the primaries if the polls hold true.

But the campaign has had controversy. In November, a Steyer campaign aide in South Carolina was forced to resign after accessing volunteer data collected by the former rival campaign of California U.S. Sen. Kamala Harris, who dropped out of the race in December.

Nationally, his claim to fame is funding a super PAC aimed at pressuring Democratic lawmakers in the U.S. House of Representatives to vote to impeach Trump, which culminated in a December impeachment. The U.S. Senate later acquitted Trump. 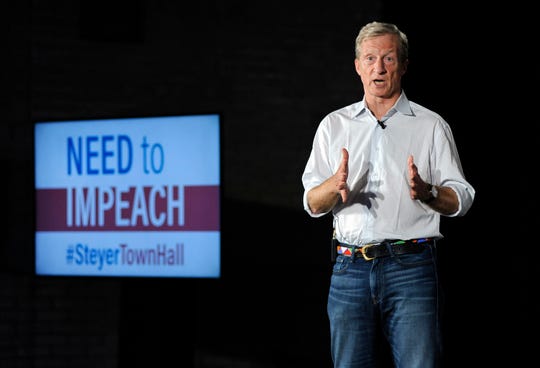 Billionaire liberal activist Tom Steyer addresses the crowd during one of 30 national stops in his Need to Impeach campaign in 2018 in Detroit, Mich. Steyer is campaigning to have people sign his petition to impeach President Donald Trump. (Photo: Jose Juarez, Special to Detroit News)

Steyer is hoping now to turn his outsider persona and activism into political momentum.

Adrian Hemond, a Democratic strategist with the bipartisan Grassroots Midwest consulting firm in Lansing, is skeptical Steyer will fare better in Michigan than he has in Iowa and New Hampshire. Steyer — who is worth $1.6 billion, according to Forbes — has yet to win one delegate.

Hemond acknowledged Steyer's deep pockets could keep him in the nomination contests for a long time, but he said candidates who aren't considered serious contenders will likely face intense pressure to exit the race.

"At some point, if you get behind in delegates, you've got to point to how you're going to get some momentum, and put some wins on the board," he said.

In 2018, Steyer’s NextGen Climate Action advocacy organization pumped more than $1.8 million in direct and in-kind contributions into a Michigan petition drive for a potential ballot initiative that would have required at least 30% of a provider’s electricity sales come from renewables by 2030.

Michigan's utility giants agreed to target a “50% clean energy goal” by 2030, including investments to ensure that 25% of the electricity they sell comes from renewable sources by that time, along with energy efficiency programs.

Steyer's backing made a huge difference in getting the major utility companies to make the commitments, said John Freeman, executive director of Great Lakes Renewable Energy Association, which worked with Steyer's group on the petitions. A prior 2012 attempt to increase the renewable energy mandate to 25% was defeated.

Backers of the 2012 initiative were outspent by the utilities and others that opposed it, Freeman said.

Consumers and DTE "knew Tom Steyer was supporting this campaign, and they knew they wouldn't have been able to swamp the campaign," he said.

"This is one of the reasons Tom Steyer is so impressive," Freeman said. "He made a commitment to get involved to address the issue of climate change, well before he decided to run for president. There are lot of wealthy people who kind of take their money and sit on it."

Jason Hayes, director of environmental policy for the free-market-oriented Mackinac Center for Public Policy, has criticized how Steyer's effort led to a de facto new state law. He has noted that "Michigan’s monopoly utilities have become so confident in their ability to independently establish energy policy for the state" that they didn't seek approval of the new 25% renewable mandate from the Michigan Public Service Commission.

The influx of outside cash normally would have caused issues in progressive circles, he said.

"If somebody is funding a side you don't like, you have a real problem with it," Hayes said. "When Mr. Steyer put his money in, they were quite all right."

The climate debate has high stakes for Michigan's automotive industry, Steyer said. Automakers such as General Motors Co. have been preparing to make all-electric vehicles, including a truck made at the Detroit-Hamtramck assembly plant.

"Detroit is the car capital of the U.S.," Steyer said. "How can you plug your electric vehicle into an outlet fueled by coal and think you're doing anything? Detroit wants to be on the cutting edge. It's incumbent on the whole state to support the industry in this transition."

Steyer has chided GM for joining Fiat Chrysler Automobiles and other automakers to side with the Trump administration in a fight over gas mileage rules for cars and trucks with California. Ford Motor Co., Volkswagen AG, Honda Motor Co. and BMW AG reached a deal with California to voluntarily increase the average fuel economy of their fleets to about 50 miles per gallon by the end of the 2026 model year.

"Shame on General Motors and other automakers for putting profits ahead of people and hiding behind Donald Trump’s attempts to strip away public health protections for American families," Steyer said in a October statement.

GM and FCA have argued their decision to intervene in a lawsuit filed by California against the Trump administration over the mileage rules was an effort to ensure there would be one national standard for fuel economy that all automakers could follow.

Steyer is likely best known for running commercials urging Congress to vote to impeach Trump. His super PAC known as Need to Impeach spent over $3 million.

"Donald Trump has committed crimes in the open," Steyer said in one of the commercials. "Sided with dictators against the United States. Made money from wealthy foreign interests trying to influence Trump administration decisions."

The impeachment campaign was worth it, he said, even though the Senate fell far short of the two-thirds majority needed to toss the president from office.

"The Senate covered up," Steyer told The News. "The Senate did not allow witnesses. The Senate declared him innocent before it heard any evidence. That's not an acquittal."

In a May 2019 memo posted on the Need to Impeach campaign's website, Steyer argued impeaching Trump would help galvanize voters in the Democratic Party's base ahead of the 2020 election.

"In 2018, millions of Americans turned out to give Congress a mandate to hold Donald Trump accountable," he wrote. "CNN's exit poll showed that 92 percent of Democrats supported impeaching Mr. Trump on election day. ... Pursuing impeachment is not just the right thing to do, it’s good politics."

Democratic strategist Hemond is skeptical that Steyer's work on renewable energy mandates and impeachment will help him win Michigan.

"Maybe to the extent they are aware of Need to Impeach," Hemond said. "He needs more than credit for his efforts at this point. He needs a miracle, frankly."

Steyer said he has enjoyed the process of running for president and pledged to recharge NextGen America's youth voter efforts if his campaign is ultimately unsuccessful.

"People always say this is really grueling," he said. "... The part of going out and talking to people is inspiring. If you don't do it, I don't know how you learn from people."

Claims to fame: Steyer spent over $3 million airing television commercials on national cable networks in support of President Trump's impeachment. He also financially backed a 2018 Michigan petition drive that prompted the state's utility giants to hike their electricity sales from renewables to 25% by 2030.

Biggest weaknesses: He has never held elected office and has performed poorly in the early voting states.

Detroit debate moment: Steyer entered the presidential race on July 9 and did not qualify for the Detroit debates.

Candidate visits to Michigan: None since 2018.