Lansing — A bill to help local clerks cope with an onslaught of absentee ballots during this year's presidential election could get the approval of Michigan's Senate leader despite an initial rejection.

But Shirkey told reporters Tuesday that he may have been "out in front" of his understanding of the proposal when he made the comments.

"As I viewed them post that conversation, it doesn’t look like that exposure is that high," Shirkey said of his fear that votes would be counted early.

Asked if he may ultimately be OK with the bill, he responded,"Conversations are going to continue."

According to Michigan clerks, late reporting of results is likely in the state's November general election because of high turnout and an expected jump in absentee voting.

In 2018, Michigan voters approved a constitutional amendment that allows for no-reason absentee voting. November will bring the first presidential election under the reform. Previously, voters had to meet certain criteria, like being older than 60 or being out of town on Election Day, to avoid voting at the polls.

For the November election, where turnout will be highest, clerks worry that without a change in state policy to allow them to begin processing absentee ballots early, results will be delayed because of the longer time it will take to open and scan each of the absentee ballots on Election Day.

The Senate Elections Committee last week referred a bill to the full chamber that would allow clerks in a municipality with more than 10,000 voters to perform pre-processing on the absentee ballots starting at 10 a.m. the day before the election. 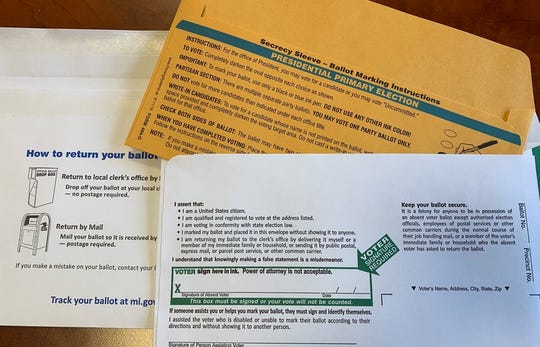 Some Michigan voters already have absentee ballots in their hands for Michigan's March 10 presidential primary. This is an example of what the envelope carrying the ballot looks like. (Photo: Barb Byrum / Ingham County clerk)

“It’s a great way to give the clerks a way to pre-process,” said the bill’s sponsor Sen. Ruth Johnson, a Holly Republican and former secretary of state.

Secretary of State Jocelyn Benson, a Democrat, has argued the bill doesn't go far enough. The proposal doesn't allow clerks to remove absentee ballots from their inner envelopes, unfold them or stack them ahead of Election Day, said Benson spokesman Jake Rollow.

"Many clerks have significantly more work on their plates, and while they aren't asking to count votes prior to Election Day, they want more time to do the preparation work needed to make Election Day go more smoothly and efficiently," Rollow said. "The voters have spoken on this issue, and now the Legislature needs to catch up."