Pompeo jousts with Dems at hearing, 1st since impeachment

Pompeo jousts with Dems at hearing, 1st since impeachment

Washington – Secretary of State Mike Pompeo defended the Trump administration’s response to the spreading coronavirus and faced contentious questions from Democrats about an airstrike that killed Iran’s most powerful general.

Democrats on the House Foreign Affairs Committee expressed frustration that the panel was afforded only two hours to question Pompeo, who until Friday had gone months without a public appearance on Capitol Hill.

Rep. Gregory Meeks, a New York Democrat, recalled Pompeo’s “thundering” while in Congress about the need for testimony from one of his Democratic predecessors, Hillary Clinton. 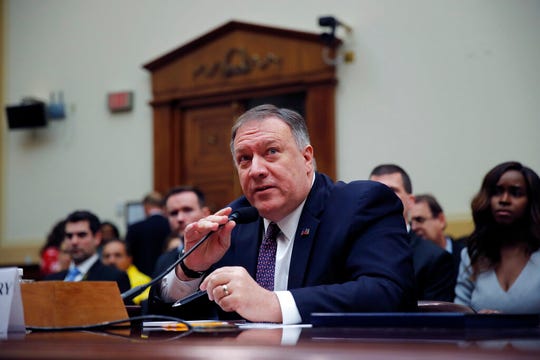 Secretary of State Mike Pompeo testifies during a House Foreign Affairs Committee hearing on Capitol Hill in Washington, Friday, Feb. 28, 2020, about the Trump administration's policies on Iran, Iraq and the use of force. (Photo: Carolyn Kaster, AP)

But, “for you, sir, we had to move heaven and earth to get you here for just two hours,” Meeks said.

Rep. Brad Sherman, a California Democrat, asked sarcastically whether Pompeo would return to Congress next week to detail the steps the administration was taking against the coronavirus or whether he would again wait months for his next public appearance.

Democratic committee chairman Rep. Eliot Engel of New York called it an “embarrassment” that the panel had been given such a short time to question Pompeo. The secretary said he had briefed Congress more than 70 times on Iran, rejecting allegations that he had not been accessible.

The hearing was meant to focus on the Trump administration’s dealings with Iran and Iraq, but many of the questions centered on the coronavirus. Pompeo said he was confident that the administration had taken action to reduce the threat.

The COVID-19 illness caused by a new coronavirus that emerged in December in the Chinese city of Wuhan has stretched well beyond Asia. The global count of those infected as of Friday exceeds 83,000, with China still by far the hardest-hit country. Dozens of cases but no deaths have been confirmed in the United States.

Pompeo’s testimony comes three weeks after the conclusion of the Senate impeachment trial against President Donald Trump, who was accused of abusing his office by withholding aid from Ukraine while he was seeking an investigation into Democratic rival Joe Biden. Trump, who denied doing anything wrong, was acquitted by the Republican-led Senate.

The inquiry before House lawmakers featured the testimony of several foreign service officers, including some who’d been enlisted with trying to carry out the Republican president’s wishes and expressed concerns over it.

Though Pompeo was not a central figure to the impeachment inquiry, he’s faced criticism for not doing more to stand up for a workforce that’s been attacked by the president – including Marie Yovanovitch, the former U.S. ambassador to Ukraine, who was ousted last spring after a push by the president’s allies.