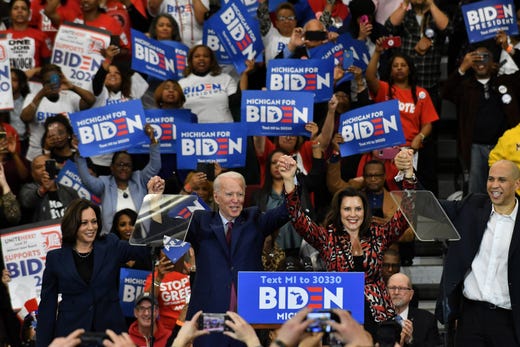 The date of the Michigan primary is on the scoreboard behind people waiting for Joe Biden to take the stage at Renaissance High School. Robin Buckson, The Detroit News
Fullscreen 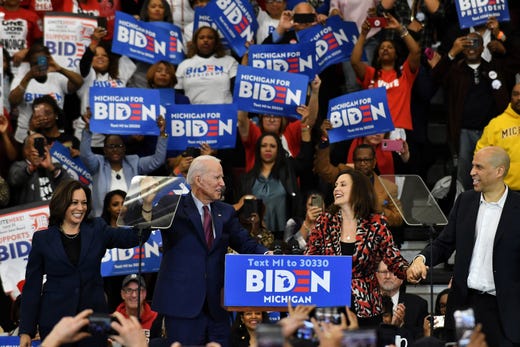 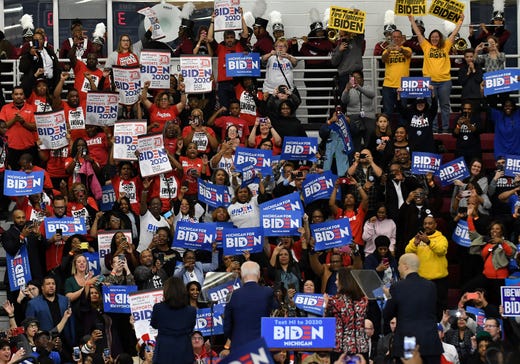 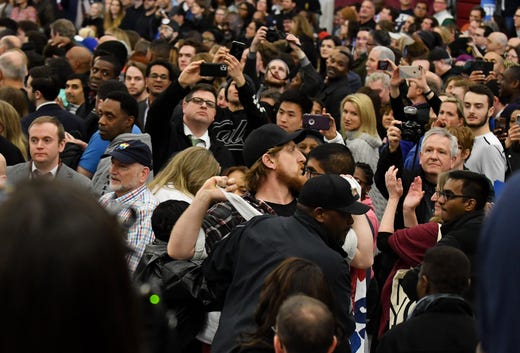 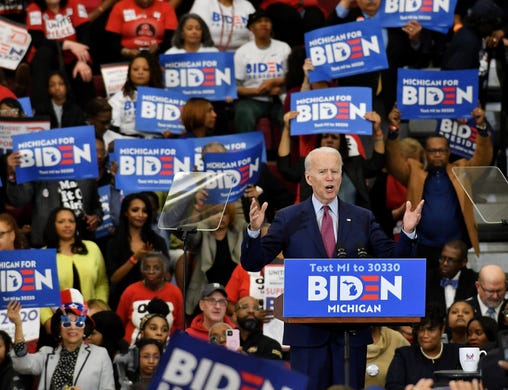 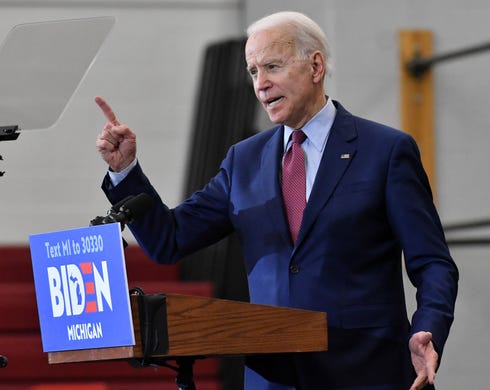 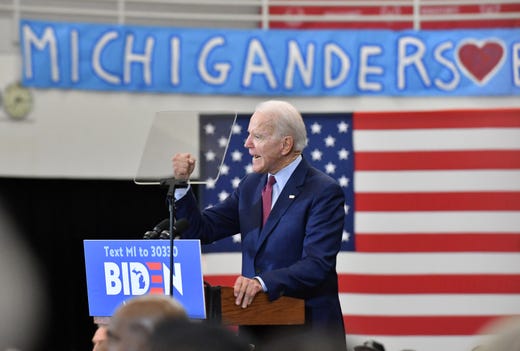 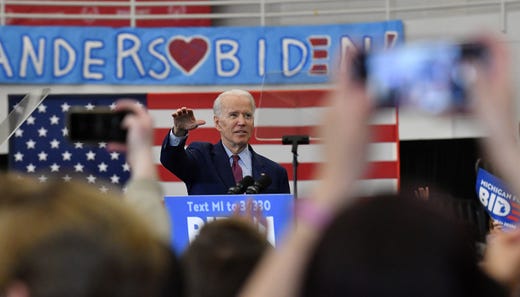 On Monday, Sanders spent the closing hours of ahead of the election participating in a Fox News town hall from Dearborn and convening a round table in Romulus about the novel coronavirus outbreak. Biden spent the day campaigning in Grand Rapids and Flint before ending in Detroit, where he rallied at a high school with two former rivals in the race — U.S. Sens. Kamala Harris of California and Cory Booker of New Jersey. 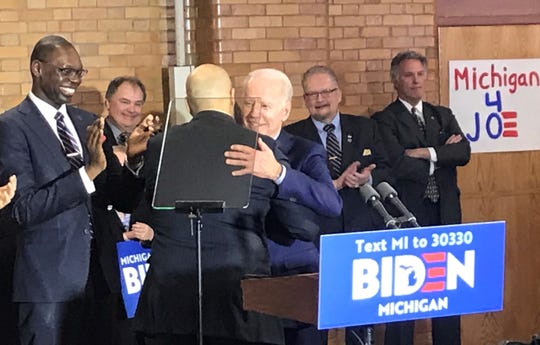 On Fox, Sanders hit Biden for bailing out "crooks" on Wall Street, criticized his vote for the Iraq war and his record on government funding for abortions. But when asked to comment on Biden's verbal gaffes and mental acuity, Sanders demurred.

“I’m not going to go to that level in attacking,” the self-declared democratic socialist said. “That’s for people to decide. All I can say is Joe and I have very significant political differences.”

Sanders had cancelled events in Mississippi, Missouri and Illinois to bring his political revolution to the Great Lakes State over the last four days, powering through the state with a flurry of rallies and events from Grand Rapids to Detroit.

Biden himself didn't return to campaign in Michigan until Monday, letting surrogates such as former Secretary of State John Kerry stump in Metro Detroit Friday through Sunday. The former U.S. senator from Delaware and his allies stressed party unity and the political stakes in Tuesday's election.

Biden joined hands with Harris and Booker, while Michigan Gov. Gretchen Whitmer urged voters to back the former vice president. But the show of unity was interrupted by two different groups of protesters.

At an earlier Flint rally before 100 people at Berston Field House — the first community center in Flint to admit African Americans who lived in the neighborhoods around it — Biden said, “To unify this nation, we first have to unify our party."

Haroletta Martin, a military veteran from Flint, was among those in the crowd to hear speeches from Booker and Biden. Martin said she voted for Trump, a Republican, in 2016 but would vote for Biden if he becomes the Democratic nominee.

"Right now, the country is going in a direction that’s very negative," Martin said. "We need to put a positive spin on the country.”

Biden's campaign got a late start in Michigan in terms of organization and boots on the ground but recent polling has shown him ahead of Sanders.

Other polls conducted since Super Tuesday suggested Biden has widened that lead. It led Whitmer to say at a Detroit Athletic Club fundraiser before the high school rally that "I gotta tell you I've slept better in the last 10 days than I have in the last 10 months.”

But pollsters famously miscalled Michigan's 2016 Democratic primary. They had former Secretary of State Hillary Clinton ahead by 10 to 30 percentage points in surveys leading up to the election. Sanders ended up winning Michigan in 2016 by 1.4 percentage points, propelled in part by young voters.

One hundred and twenty five delegates are up for grabs in Michigan — the biggest prize among the six states holding primaries Tuesday.

But the state holds extra significance as a crucial general election battleground won by President Donald Trump in 2016 by 10,704 votes — a small fraction of one percentage point.

On Fox News, Sanders was shown a recent clip of Clinton saying that "nobody likes" him in the Senate, but Sanders didn't bite.

Sanders was asked by an audience member about the "negative effects of socialism" in Russia and whether democratic socialism would have the same result.

The independent Vermont senator responded that the Soviet Union and Cuba were marked not by socialism but totalitarianism and thuggery. 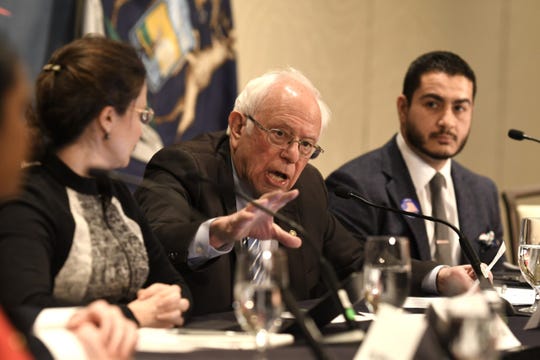 A better comparison, he said, is the democratic socialist principles at work in Finland, Denmark and Sweden where health care is a right and university is free.

"I'm talking about countries all over the world who have used their government to try to improve life for working families, not just the people on top," Sanders said.

Rachel Kay, 28, of Ann Arbor, said the senator humanized himself and stayed true to his campaign during the town hall. She argued Sanders can work with politicians of different political stripes who disagree with him.

“We need a rabble rouser. We need somebody who can challenge the corrupt monied interest in Washington and the corporations,” Kay said.

Sanders used the coronavirus forum in Romulus to discuss his single-payer Medicare for All plan, under which the government would provide health care coverage to all. When a coronavirus vaccine is developed, everyone in the country should get it for free, he said.

But Biden, speaking earlier in Grand Rapids, said it would take a long "slog" to get Sanders' Medicare for All in place, if it could happen at all.

He advocates for building on the current health care system and the Affordable Care Act by providing a public or government option that people could purchase if they needed coverage or didn't like their private insurance.

"The patients at Cherry Hill, they cannot afford to wait for a revolution," Biden said at the nonprofit Cherry Health's center. 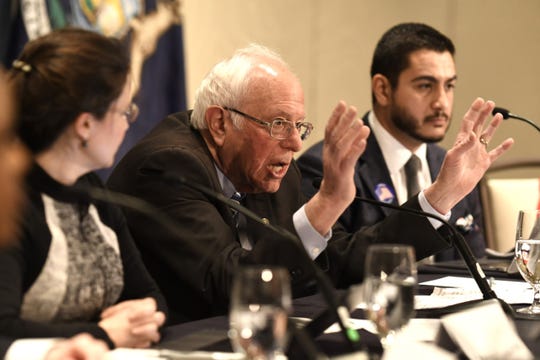 "They are looking for results for their families and for themselves today. Immediately. Not tomorrow."