Legislature considers reforms aimed at coronavirus, including $25M in funding

Legislature considers reforms aimed at coronavirus, including $25M in funding

Lansing — The Michigan Senate approved Thursday $25 million to respond to the spread of the coronavirus as lawmakers proposed reforms tied to the outbreak, including tougher price gouging penalties and requiring insurance to cover certain illness costs.

State Sens. Jeremy Moss, D-Southfield, and Ruth Johnson, R-Holly, announced three new bills that would bar businesses from unreasonably increasing the prices of essential items, including food, medical supplies and lodging by more than 10% during a state of emergency or natural disaster.

"No one in Michigan should be profiteering off of this global health crisis," Moss said in a statement.

On Tuesday night, Gov. Gretchen Whitmer issued a state of emergency in Michigan after the first two cases of coronavirus disease — COVID-19 — were confirmed in Michigan. Though Thursday, there had been 1,215 cases in 42 states with 36 deaths in the United States, according to the Centers for Disease Control and Prevention.

Moss said he started examining Michigan's laws against price gouging in 2017 after a storm knocked out power in locations across the state. The first-term senator said a motel in his district reportedly increased its prices in the aftermath of the storm from $59 a night to $400 a night.

After that, Moss and his staff began examining the state's price gouging laws and found them to be "weak" and "broad." The new proposals would set specific policies and allow the attorney general to bring actions against violators. Civil fines could reach up to $10,000 for an individual, according to the legislation.

“This is a time to come together, not to take advantage of one another,” said Johnson, a Republican who is working with Moss on the bill.

The proposals against price gouging would have to pass both the House and Senate and get Whitmer's signature to become law. 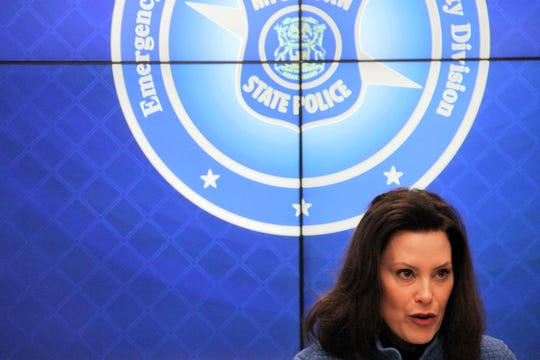 Michigan Gov. Gretchen Whitmer addresses the media about the state's steps to prevent the spread of coronavirus at a Friday press conference at the Michigan Emergency Operations Center in Dimondale. (Photo: Malachi Barrett, AP)

On Thursday, the Senate voted 36-2 for a $312 million supplemental spending bill that included $25 million for responding to the coronavirus.

The bill was part of a package that would provide $16 million to fund the Pure Michigan tourism campaign, which previously received more than $37 million a year before being temporarily eliminated by a Whitmer veto in 2019.

Of the $25 million related to coronavirus, $10 million would go to the state's "preparedness and response activities," including laboratory testing, infection control and the continuation of "critical" state government functions. Another $15 million would be available for future appropriations related to the virus. The bill is part of a larger spending package and already passed the House.

The bill also authorizes up to $50 million in federal revenues for combating the respiratory virus to be spent later.

In the Michigan House, Democrats unveiled Thursday a 10-bill package of proposals  that would create coronavirus reporting requirements and force the Michigan Department of Health and Human Services to develop a "model pandemic preparedness plan."

One bill would also require private insurance coverage to cover costs associated with the coronavirus — at no out-of-pocket expense. The bill, sponsored by Rep. Darrin Camilleri, D-Brownstown, includes coverage of treatment, testing, vaccines, hand sanitizer and face masks, according to a press release.

“With an issue as serious as coronavirus, the last thing we want to see is people skipping testing or lifesaving treatment because of cost,” Camilleri said in a statement. “At this critical moment, I believe we have a duty as a state to provide care to all who need it, regardless of ability to pay.”

Rep. Padma Kuppa, D-Troy, has introduced a bill to expand requirements that businesses in Michigan offer paid sick leave. Similar requirements were removed from state law by the GOP-controlled Legislature in 2018 after lawmakers initially approved language offered by a ballot proposal campaign.

Kuppa's office said it's estimated that nearly 1.7 million workers in the state are unable to use paid sick time due to the action taken in 2018.

"Paid sick time is critical for working families across Michigan, especially with COVID-19 on our doorstep,” Kuppa said. “Without the ability for our workers to stay home when they are sick, it can become a health concern for us all."

Opponents ofthe language from the 2018 ballot campaign said it was "unreasonable" and would have led to employee cuts.