Lansing — The Michigan Republican Party will allow county conventions to take place through teleconferences or over the internet next week to stem the spread of the coronavirus.

The party's state committee approved a rule change Sunday that allows GOP officials to "take whatever measures necessary to protect the health and safety" of county convention participants. The rule specifically allows for email conferences, telephone conferences and "any other form of remote conferencing."

While previous county conventions have been delayed because of snow, it's the first time in recent memory that such a move has been approved to avoid in-person meetings, said Tony Zammit, the party's communications director. 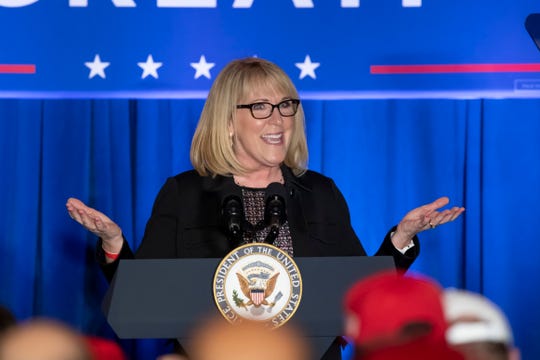 Laura Cox, chairwoman of the Michigan Republican Party, speaks before the arrival of Vice President Mike Pence during a campaign rally at the Marriott hotel in Troy, February 25, 2020. (Photo: David Guralnick, The Detroit News)

"I don’t think we’ve ever taken this type of this action before," he said.

Rob Steele, a cardiologist, is the current Republican national committeeman for Michigan. He is being challenged by Kevin Whiteford, a businessman who's married to State Rep. Mary Whiteford, R-Casco Township.

The Republican county conventions can draw crowds ranging from a handful of people in some counties to hundreds of people in other counties, such as southeast Michigan's Oakland County.

As the coronavirus spreads across the country, federal health officials have recommended the cancellation of gatherings that draw more than 10 people. And Michigan Gov. Gretchen  Whitmer, a Democrat, has banned gatherings of more than 50 people.

Most county Republican parties have chosen to have conventions either over the phone or through internet programs, Zammit said.

The Oakland County Republican Party will use a conference program on the internet and a telephone conference for those who don't have internet accessibility, says a letter from Rocky Raczkowski, the county's GOP chairman. 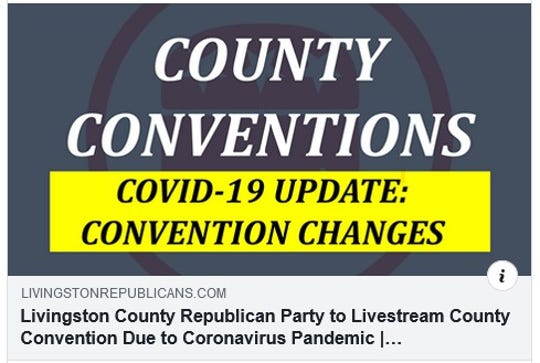 A Facebook post from the Livingston County Republican Party notifies people of changes to the upcoming county convention because of concerns about the coronavirus. (Photo: Screenshot)

"As your county chairman, I am taking this very seriously but also staying calm while following the guidelines which the CDC (Centers for Disease Control and Prevention) and President (Donald) Trump have laid out for us," Raczkowski wrote in his letter.

The Livingston County Republican Party will stream its convention on its Facebook page and provide usernames and passwords to eligible delegates to vote through a software program.

Meghan Reckling, chairwoman of the Livingston County Republican Party, said in a statement that her priority "is to help to ensure the safety of our precinct delegates by doing our part to help protect the health of our members."