State Rep. Tyrone Carter, D-Detroit, has tested positive for COVID-19 and is "doing well" a week after he attended a 12-hour Michigan House session

A Detroit lawmaker has tested positive for COVID-19 a little more than a week after he was present during a roughly 12-hour session of the Michigan House.

State Rep. Tyrone Carter, D-Detroit, said he was tested Saturday and received his positive results back Thursday. He is the first known state lawmaker to have tested positive for the virus.

Carter said he started developing symptoms on March 18. He had a 102-degree fever, a dry cough and no appetite.

The lawmaker, a former Wayne County Sheriff's Office lieutenant, took cold and flu medication and drank plenty of fluids until he and his wife heard that Wayne State University was offering testing for first responders.

"Once we found out that we could get tested, I said let’s go," Carter said.

Carter said he had not traveled recently but he attended a March 6 event with a few others who have since been hospitalized with the virus.

At the event was 63-year-old Wayne County Sheriff Cmdr. Donafay Collins, who died Wednesday from the virus.

Carter said he feels better, but informed House leadership to warn other lawmakers with whom he might have been close during session in the days following the March 6 event.

"People need to know," he said. "If there was somebody up there who had it, I would prefer they let us know.

"I don’t think this virus has been treated with the seriousness it should be. ... It's scary." 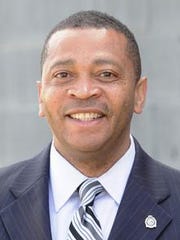 House Democratic Leader Christine Greig and House Speaker Lee Chatfield said they were concerned about Carter and wished him a “speedy recovery.”

“We all must remain vigilant in practicing social distancing and do our part to stop the spread of this virus,” said Greig, D-Farmington Hills. “Anyone who is experiencing symptoms should follow the CDC guidelines and contact their medical provider.”

Chatfield, R-Levering, said he was praying for Carter and his friends and family. He cautioned legislators and staff who were near Carter during a 12-hour March 17 session, during which state lawmakers approved $125 million in funding for coronavirus response.

“Anyone who was within six feet of Rep. Carter during the incubation period should monitor themselves for symptoms,” Chatfield said. “Anyone who does show symptoms should seek testing with their local healthcare provider and maintain strict social distancing.”

Carter applauded the recent actions of Michigan Gov. Gretchen Whitmer seeking to slow the spread of the virus.

"Hopefully, we can flatten this thing out," he said.