Michigan reported Saturday that 111 additional people have died in connection with the disease caused by the novel coronavirus, bringing the state's total to 1,392deaths.

The state also confirmed 1,210 new cases of COVID-19, bringing its cumulative total cases to 23,993, with some health experts saying the trend line shows signs of possibly leveling off. 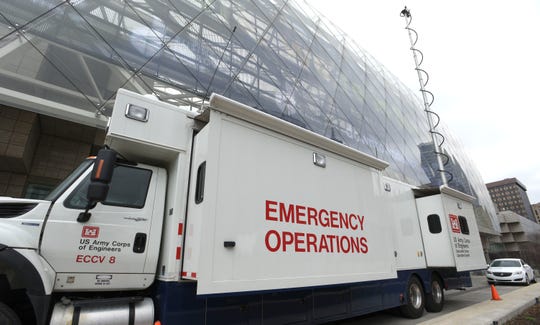 The new case figure is a 5% increase over Friday when the state reported 22,783 confirmed cases and 1,281 deaths.

The new tally comes as the United States on Saturday surpassed hard-hit Italy for its total number of confirmed deaths from COVID-19 topping 20,000. Italy has just under 19,500 deaths, according to tracking by Johns Hopkins University & Medicine Coronavirus Resource Center.

"We are living in a difficult time, & the unknown is scary," Gov. Gretchen Whitmer tweeted Saturday. "But I do know that we must remain steady. We can’t allow fear or panic to guide us. The lives of Michiganders are at stake. We must stay the course to save lives.

"Stay steady. We’re going to get through this together."

Michigan has ranked third in the United States for the number of COVID-19 cases and deaths, behind New York and New Jersey.

Detroit as of Saturday reported nearly 6,400 cumulative cases and 348 deaths — up 21 deaths since Friday's report, according to state data.

We are living in a difficult time, & the unknown is scary.

But I do know that we must remain steady. We can’t allow fear or panic to guide us. The lives of Michiganders are at stake. We must stay the course to save lives.

Stay steady. We’re going to get through this together.

The Metro Detroit counties of Wayne, Oakland and Macomb make up about 85% of the deaths in Michigan.

And about 78.8% of the state’s COVID-19 cases have been reported in the three Metro Detroit counties as of Saturday, which is the lowest percentage for the three counties since March 18.

That reflects the growth of cases outside Metro Detroit. At least 74 of Michigan’s 83 counties now have at least one case, according to state data released Saturday.

Alpena and Lake counties are the newest to report COVID cases, and Chippewa County dropped off the listed counties. It's possible Chippewa's case was recategorized to another county or state.

For the second week, Michigan officials reported data on those in the state who have recovered from COVID-19. The state is measuring recovery as those people with a lab-confirmed diagnosis who are still alive 30 days after the onset of disease.

The recovered population in Michigan as of Friday was 433, up from 56 on April 3.

That figure likely underestimates the overall population of Michiganians who have recovered from COVID-19 to date, in part because not everyone infected with coronavirus exhibits symptoms, seeks medical care or can get tested to receive a diagnosis.

This week, Whitmer extended and expanded her stay-home order through April 30, aiming to stem the disease's spread, even as some modeling showed Michigan is past or nearing its peak for coronavirus cases.

The state is also stepping up testing, announcing over a dozen new or expanded COVID-19 drive-thru testing sites statewide and an additional commercial lab to process results and boost daily testing capacity by 40%.

The plan announced Saturday by Whitmer includes nine new drive-thru locations opening Monday where individuals are tested without exiting their vehicles, plus the expansion of three existing drive-thru sites in Grand Rapids, Lansing and Saginaw.

The new sites will include two large-scale centers in Detroit and Flint which plan to serve at least 750 and 250 people a day, respectively.

“Increased testing is the only way we will know where COVID-19 is in Michigan, and will guide our public health response,” said Dr. Joneigh Khaldun, Michigan’s chief medical executive.

“Along with social distancing practices such as staying home and keeping 6 feet between yourself and others if you must go out, more testing will help Michigan slow the spread of COVID-19.”

The state Department of Health and Human Services this week adjusted the way it is reporting COVID-19 deaths.