GOP candidate Detmer under fire for comments on Proud Boys

GOP candidate Detmer under fire for comments on Proud Boys

Republican congressional candidate Mike Detmer has come under fire for a Facebook post viewed as defending the neo-fascist group The Proud Boys, which is known for violent incidents at political rallies and condemned as a hate group. 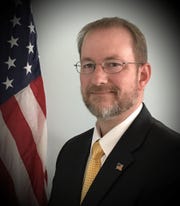 Detmer, who is vying for Democratic U.S. Rep. Elissa Slotkin's seat, posted on his Facebook page that he spoke with leaders of the all-male Proud Boys after a member of the group appeared in a selfie he took prior to a Lansing protest last week.

Detmer, a Howell Republican, wrote that the group "is about protecting our freedoms."

He also listed the tenets of the Proud Boys, which include defending the First and Second amendments but also Western chauvinism, closing U.S. borders to immigrants, "anti-racial guilt" and "venerating the housewife."

Two members of the Proud Boys went to prison last year for their roles in a New York brawl with a group of anti-fascists known as Antifa, which also has been involved in violent incidents.

Detmer said in an interview that the Proud Boys has been wrongly labeled as a racist hate group. He posted their tenets "to provide facts, so people could put this group into context," he said.

"Are they are rough group? Probably," he said. "But I had no idea that they were going to be there, and I still don't know who the guy was that jumped in my photo."

Detmer said he is not a member of the Proud Boys, and he does not condone violence.

"I haven't seen anything to suggest that they're a white-supremacist hate group. But I'm also looking at the source of who's labeled them, and they're not squeaky clean either," Detmer said.

"The bottom line is my campaign's not associated with Proud Boys. I'm not a white supremacist. I'm not a racist. And I got photo bombed by a guy who happened to be there in the parking lot."

Michigan Republicans aren't saying much on the record about the episode, including Detmer's opponents in the GOP primary election for the 8th District, which includes Ingham and Livingston counties and parts of Oakland County.

“Right now, Michiganders are worried about their constitutional rights being protected, ability to work and health and safety — not a weird social media post,” Republican Kristina Lyke, one of Detmer's opponents, said in a statement to The Detroit News.

Asked about the Proud Boys controversy, GOP primary candidate Paul Junge did not comment. Instead, he criticized Slotkin for Democratic leaders' actions on supplemental funding for small businesses during the pandemic.

The campaign arm of House Democrats blasted Detmer and his opponents for not condemning him.

“Their style of dangerous rhetoric and violence has no place in our politics."

Slotkin campaign spokesman Gordon Trowbridge said, "Congresswoman Slotkin has been clear: Hate has no place in the 8th District, and we hope every contestant in this race would feel the same way."

The controversy dates to last week's Operation Gridlock — a protest that drew an estimated 4,000 people to Lansing in opposition to Gov. Gretchen Whitmer's expanded stay-home order during the coronavirus pandemic.

Nearly 3,000 Michiganians have died in connection with COVID-19 as of Thursday.

Detmer, who works at a Michigan auto dealership, said he took the selfie at the staging area for the Lansing caravan. In the photo, a man wearing a black and yellow Proud Boys face covering is making an "okay" sign with his left hand.

Detmer said he doesn't know who the guy is, but the OK hand gesture did not strike him as unusual before he posted the photo. "I'm fluent in American Sign Language ... that sign is also the No. 9 and letter F," he said.

The "okay" gesture has been used by some in the alt-right to show support for "white power" and by conservatives who flash it to spoof liberals.

Detmer noted the Anti-Defamation League has tied the "white power" gesture to a 2017 hoax by members of the website 4chan to falsely promote the sign as a hate symbol.

On Facebook, Detmer said he had a "great discussion" with top members of the Proud Boys including Enrique Tarrio, national chairman, and determined the group is "not white supremacists nor racist," saying its membership includes African Americans and Latinos.

While the Proud Boys disavow connections to racists and white nationalists, the Southern Poverty Law Center and ADL say members have expressed or displayed racism, Islamophobia, anti-immigrant sentiments and misogyny.

"It's disturbing to see congressional candidate Mike Detmer proudly broadcasting his affiliation with this group."

The Proud Boys group admits only men as members and has been banned by Facebook and Instagram. The Southern Poverty Law Center categorizes them as a hate group and says they are active in Michigan.

"If you look into their social media posts, you can find Proud Boys who are making extremely bigoted or racist statements."

She said the Proud Boys stands out from other groups due to its history of violence and because it has a closer relationship with the mainstream right than other far-right groups do. Proud Boys are a constant presence at President Donald Trump's rallies, she said.

Detmer dismissed the hate-group categorization by the Southern Poverty Law Center, arguing the center has "zero credibility" in part for having identified groups such as the faith-based Family Research Council as extremist.

Founder and former member of the Proud Boys, Gavin McInnes, last year filed a defamation lawsuit against the SPLC in federal court in Alabama over the hate group designation, alleging the center is driven by fundraising interests. SPLC has called the case "meritless."

SPLC defines hate group as an organization with "beliefs or practices that attack or malign an entire class of people, typically for their immutable characteristics."

"We come to our decisions about who gets listed after a great deal of deliberation and research, and the reasons we’ve listed the Proud Boys as a hate group are available on our website," Miller said.

Detmer said his political platform does not reflect the tenets of the Proud Boys. For example, he is not for closing borders to all immigration, but supports boosting border security and completing Trump's Southern border wall.

Detmer also said he's not anti-Muslim. "I've got no issues personally with or politically with Muslims or any faith whatsoever," he said.

"As far as what they do," Detmer said of the Proud Boys, "that's a good question for them."