But opponents of the law aren't painting such a rosy picture.

In a statement Tuesday, Whitmer's administration said the initial rate filings approved under the new law will bring average reductions in premiums for personal injury protection (PIP) coverage ranging from 16.5% to 54.3% depending on the PIP limit a driver chooses.

"This is great news for Michigan drivers and their families," Whitmer said. "Last year, we worked across the aisle to pass a historic, bipartisan auto insurance reform to bring down costs for drivers everywhere. It’s great to see that it’s paying off for Michiganders, especially during a time when drivers may need extra money in their pockets."

Whitmer signed the auto insurance reform legislation into law in May 2019. The law takes effect for policies that issue or renew after July 1.

The law brought a series of changes, including ending the requirement that motorists purchase auto insurance policies that guarantee uncapped lifetime medical benefits in the event of catastrophic injuries. Insurers are now able to sell reduced coverage policies but they also must realize reduced personal injury protection rates.

The required reductions were 10%, 20%, 35% and 45% respectively for each of the above limits compared to premium rates for PIP coverage in effect on May 1.

However, the Coalition for Protecting Auto No-fault, which opposed the 2019 reforms, released a report Friday that credited insurance companies' compliance to decreases in the state's catastrophic claims fee.

Drivers who choose unlimited lifetime medical benefits will pay a $100 fee, down 55% from $220, and drivers who choose other tiers of coverage will pay no fee, according to the Michigan Catastrophic Claims Association in November.

The report also said the amount that individual policyholders actually pay for their PIP coverage will "vary significantly from this projected average based on rating factors — such as driving record, vehicle type, territory and credit history." 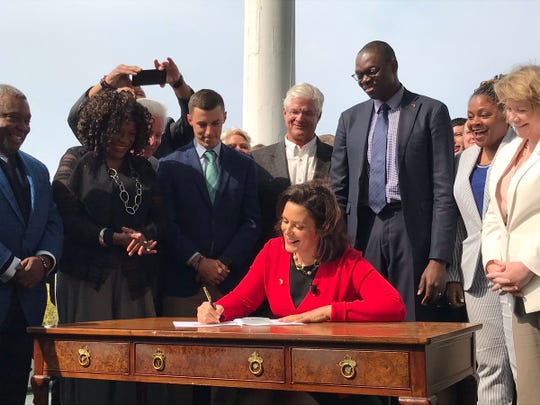 The administration pointed to that as well Tuesday, saying auto insurance premiums are "very individual to each consumer and may vary based upon such things as driving record, miles driven and coverages selected."

The initial six filings represent a quarter of Michigan’s auto insurance market, according to the Whitmer administration.

“These filings show statewide savings exceeding the law’s requirement at each PIP coverage level,” said Anita Fox, director of the Department of Insurance and Financial Services. “Michiganders can also choose a coverage that best fits their family’s needs and budget, and can expect savings for each option.”

The 2019 law created a tiered fee schedule for medical providers that caps rates they can charge auto insurers for motorist care and barred insurers from basing rates on ZIP codes.