The second-ranking House Republican, Rep. Steve Scalise of Louisiana, will be the party’s leader on the Democratic-dominated panel

The second-ranking House Republican, Rep. Steve Scalise of Louisiana, will be the party’s leader on the Democratic-dominated panel, McCarthy told reporters. Among those joining Scalise will be Rep. Jim Jordan, R-Ohio, one of Trump’s most loyal and aggressive allies. 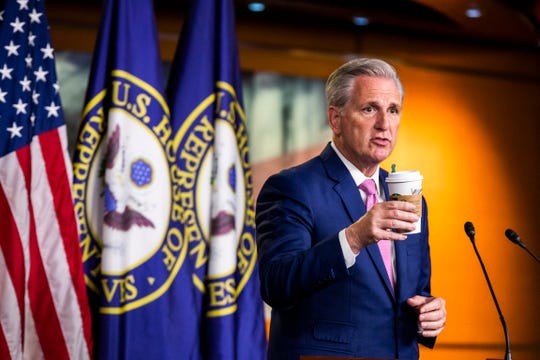 House Minority Leader Kevin McCarthy of Calif. shows his cup of coffee to emphasize that Starbucks is open during a news conference on Capitol Hill, Thursday, May 7, 2020, in Washington. (Photo: Manuel Balce Ceneta, AP)

McCarthy’s appointees, along with some Democrats that House Speaker Nancy Pelosi has already named, suggest that the panel will see its share of partisan conflict. Trump has already said Democrats put “every Trump hater” on the panel.

The Democratic-led House used a partisan vote last month to create the subcommittee of the House Oversight and Reform Committee over GOP objections. The panel, which will track emergency federal relief spending already approaching $3 trillion, will have a 7-to-5 Democratic majority.

Chairing the panel will be Rep. James Clyburn of South Carolina, the No. 3 House Democratic leader. The other Democrats are Reps. Maxine Waters of California, Carolyn Maloney and Nydia Velázquez of New York, Bill Foster of Illinois, Jamie Raskin of Maryland and Andy Kim of New Jersey. Clyburn, Waters and Raskin have shown little reluctance to clash with Republicans over the years.

Republicans have claimed Democrats will use the panel to seek election-year dirt on Trump. McCarthy criticized the panel as a wasteful duplication of other oversight efforts and warned that Democrats might use it to “take another stab at impeachment.”

Pelosi, D-Calif., has said the panel will be “as nonpartisan as possible” as it tries rooting out fraud and waste.

“We must be sure that the money we put forth goes to those who need it most, in a way that addresses disparities in access to health care and credit,″ she said last month.

The subcommittee will supplement the work of others tracking the dollars, including a committee of inspectors general, a congressional panel of experts and a special Treasury Department official.

But partisan disputes have already colored the effort to monitor the unprecedented piles of taxpayer money being used to combat the pandemic and sustain the reeling economy.

Brian Miller, a lawyer in the White House counsel’s office, told senators he would conduct audits and investigations “with fairness and impartiality.″

But Sen. Elizabeth Warren, D-Mass., said Miller’s time in the White House should have disqualified him from the inspector general’s role.

In addition, a bipartisan congressional commission that will track the spending remains without a head. Its leader will be jointly appointed by Pelosi and Senate Majority Leader Mitch McConnell, R-Ky., who have yet to announce a choice.

Separately, McCarthy said he was creating a 15-member House GOP task force to study Chinese influence on the U.S., including any role in the virus’ origin and spread.

With Trump increasingly blaming China for the outbreak, the GOP group is due to produce a report in October, the month before Election Day.