Through praise and criticism, national spotlight stays fixed on Whitmer

Gov. Whitmer's appearances in national media are increasingly driving speculation about a run for vice president.

Through praise and criticism, national spotlight stays fixed on Whitmer

Lansing — From the cover of Newsweek to a stop on ABC's "The View" to a 7,000-word profile by Politico, Gov. Gretchen Whitmer's frequent appearances in national media are increasingly driving speculation about a run for vice president and criticism from Republicans.

Since March 15 — five days after Michigan confirmed its first two cases of COVID-19 — no politician has made more appearances on national Sunday morning television news shows than Whitmer, according to a Detroit News review of weekly Associated Press reports.

The Democratic governor has been on the Sunday morning shows of the four major networks and CNN nine times. Out of 80 total guests, she's tied with White House adviser Dr. Anthony Fauci, director of the National Institute of Allergy and Infectious Diseases, and Scott Gottlieb, former commissioner of the Food and Drug Administration, for the most appearances. Fauci made five of his appearances — one on each show — on the same day. 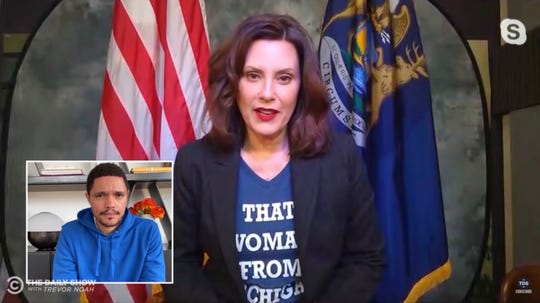 "There’s genuine interest from around the country in what’s going on in Michigan and how Gov. Whitmer has tried to respond to it," said Brandon Dillon, former chairman of the Michigan Democratic Party.

"She’s a good solid spokesperson for the state of Michigan."

Republicans have contended in recent weeks that she's using the public health crisis to elevate her political profile and is spending too much time on national appearances when other urgent matters need to be addressed.

"While the governor has time for regular press conferences and appearances on national news shows, it’s time to put a priority on resolving this budget crisis," Senate Appropriations Chairman Jim Stamas, R-Midland, said in a Friday statement after state officials detailed a $3.2 billion budget shortfall.

The State Budget Office projected a $1 billion to $3 billion budget shortfall more than a month ago.

As political observers have noted, Michigan is also a key political battleground that President Donald Trump won by 10,704 votes in 2016. In addition, former Vice President Joe Biden, the likely Democratic presidential nominee, has listed Whitmer among his potential running mates.

All of those factors have increased national media attention on Whitmer, who was first elected governor in 2018, while she's trying to manage the state's response to a pandemic that's been linked to the deaths of more than 4,800 Michigan residents. 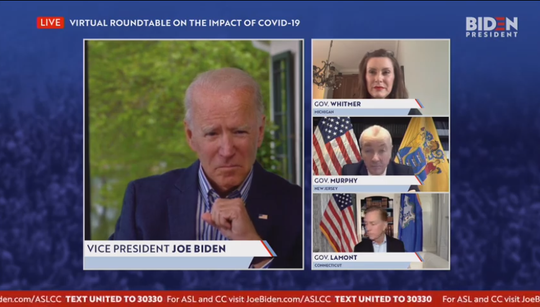 Whitmer has done more than 60 national media interviews since March 10, the day the state confirmed its first COVID-19 cases, according to tracking by the conservative group Michigan Rising Action.

"Gov. Whitmer is leveraging the pandemic to raise her national profile at the expense of finding solutions for the health and economic problems ravaging our state," said Tori Sachs, executive director of Michigan Rising Action.

The governor's office didn't respond to a request for comment for this story.

But during an April 7 radio interview on Lansing-based "The WILS Morning Wake-Up with Dave Akerly," Whitmer said people have asked, why "do you go on the national news?"

"I'll tell you why," Whitmer said. "No. 1: I've got to use every opportunity to educate people about how serious this is. And No. 2, every time I do that we get more offers of help from around the country for Michigan."

The national appearances have benefited the state, she said.

"Every invitation is the opportunity to tell the story about what's happening here in Michigan and get some more help for people who need it," the governor added.

Whitmer's early clashes over getting desperately needed medical supplies and equipment from the national stockpile through President Donald Trump's administration helped to drive some of the early requests. At one point, Trump called her "the woman from Michigan" and wondered how Vice President Mike Pence could deal with her in meetings with other governors.

But the Whitmer-Trump conflicts have waned as Michigan received more shipments of personal protection equipment, got two field hospitals opened in Metro Detroit and experienced a stabilization and decline in the growth rate of COVID-19 cases and deaths.

Last week, Whitmer made two stops on CNN and an appearance on MSNBC, along with doing an interview with "The View" on Wednesday. But television isn't the only medium focusing on Michigan's governor.

The national political news outlet Politico published a 7,000-word profile of her titled "The Woman in Michigan’ Goes National" on April 9. Glamour magazine ran a question-and-answer with Whitmer on May 4.

She was on Comedy Central's "The Daily Show" on April 1. She was on the cover of Newsweek magazine in April. And she did an interview with The New York Times' "The Daily" podcast that posted April 29.

"This is a crisis of momentous proportions, which we’ve never experienced before, and she finds herself right in the middle of it," Ballenger said.

Criticisms levied by Trump against Whitmer also helped boost her profile, Ballenger said. Speculation about why she's doing so many national interviews "is only going to increase" as more appearances happen, he added.

"She doesn’t have to do these things," said David Dulio, a political science professor at Oakland University. "It’s by choice. These shows may approach her. She may approach them. It may be part of a strategy, I don’t know."

If Biden ultimately chooses Whitmer to be his running mate, more voters knowing her could be a benefit, Dulio said. But the appearances also come with risks as Republicans criticize the time she's spent on them, he noted.

COVID-19 is driving a lot of attention, Dulio contended, because Whitmer and New York Gov. Andrew Cuomo, whose state has the most cases and deaths nationally, are the two governors seeming to get the most national interviews. 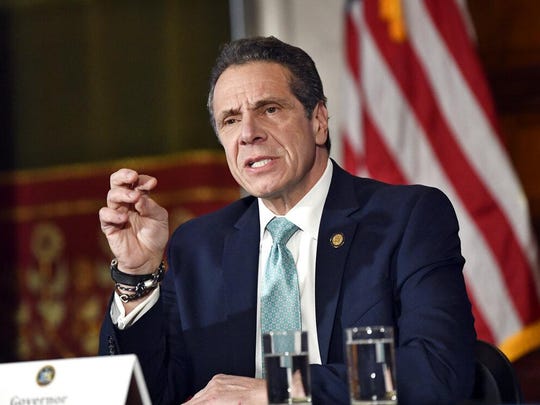 New York Gov. Andrew Cuomo talks about his upcoming meeting with President Donald Trump as New York pays more in taxes to the federal government than any other state during a news conference in the Red Room at the state Capitol Monday, Feb. 11, 2019, in Albany, N.Y. (Photo: Hans Pennink / AP)

Cable news networks have broadcast Cuomo's media briefings. He also has appeared on the CNN show hosted by his brother, Chris Cuomo.

When it comes to Sunday morning news shows, Whitmer made nine appearances from March 15 through May 17. The governor with the second most appearances was Maryland Gov. Larry Hogan, who made seven stops and chairs the National Governors Association.