Whitmer: Trump's words have helped inspire threats against her

On two calls with the White House, Whitmer said she told officials it would be "helpful if they would take some effort to bring down the heat."

Whitmer: Trump's words have helped inspire threats against her

Lansing — Gov. Gretchen Whitmer said in an interview aired Monday night that criticism from President Donald Trump helped inspire threats against her as she's worked to combat the spread of COVID-19 in Michigan.

Whitmer made the comments during an interview with the national political news site Axios, which also has a television show on HBO. 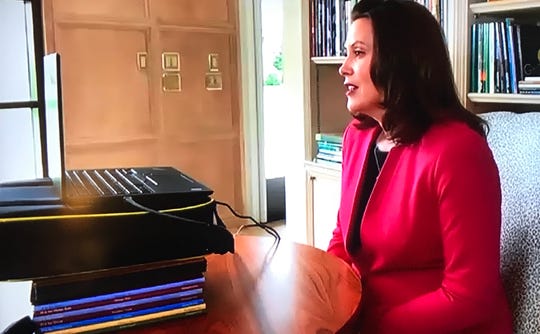 Gov. Gretchen Whitmer appears on the Axios show on HBO on Monday, May 25, 2020. (Photo: Screenshot)

Axios reporter Alexi McCammond noted threats levied against the governor on social media before asking whether the Republican president's criticisms of her inspired some of the threats she's received. Whitmer said they did.

On two calls with the White House, Whitmer said she told federal officials it would be "helpful if they would take some effort to bring down the heat."

"The heat is ratcheting up," she said. "And it only makes things worse and so it was my request that they consider doing something to bring down the heat."

"They noted that they heard the request," Whitmer said.

Trump has labeled her "half Whitmer" and called on officials to "liberate Michigan."

The Democratic governor was also asked about opposition from Republican lawmakers in Michigan and the potential that she could be former Vice President Joe Biden's running mate.

Michigan @GovWhitmer evades, multiple times, on #AxiosOnHBO whether she would say yes to being Biden’s VP: “I've not said yes or no because I've not been asked." pic.twitter.com/gtqO4z3MZY

GOP lawmakers have frequently criticized her handling of the COVID-19 pandemic, urging her to move more quickly to reopen the state's struggling economy.

On whether Republican lawmakers were carrying Trump's water or authentically thought she's wrong, Whitmer replied, "I think there's probably a little bit of both. It's undeniable that we are in the midst of election-year politics here, and it stinks because I think that we should all be focusing on the public health crisis."

Whitmer said she has told Biden's team that she will help the campaign where she can.

"So you would say yes?" McCammond then said of Whitmer's willingness to be Biden's running mate.

"Honestly, I am not looking to leave Michigan," Whitmer responded, noting the pandemic and record flooding in the Midland area.

"So you would say no?" the reporter continued.

"I have not said yes or no because I have not been asked," Whitmer said, before adding that she's "in the mix" with a group of other leaders.