Three Michigan Democrats were among the lawmakers expected to vote by proxy in a historic move, as GOP lawmakers moved to challenge the practice

Three U.S. House Democrats from Michigan were among the lawmakers who voted by proxy in Washington in a historic move Wednesday, as Republican lawmakers moved to challenge the practice in federal court.

Proxy voting is an new option for House members who wish to avoid traveling to the District of Columbia during the coronavirus pandemic, and Wednesday is the first time the new procedure was to be used on the House floor.

U.S. Reps. Brenda Lawrence of Southfield, Andy Levin of Bloomfield Township and Rashida Tlaib of Detroit are among more than 71 Democrats who signed up with the House clerk to have one of their colleagues cast their vote by proxy.

U.S. Reps Tim Walberg, R-Tipton, left, and Bill Huizenga, R-Zeeland, talk with the media outside Bethany Christian Services in Grand Rapids on Friday, after they said they were turned away from a visit at one of the organization's facilities where refugee children were being housed. (Photo: Dale G. Young, The Detroit News)

The House was considering a renewal of expired federal surveillance powers among other measures during an abbreviated two-day session in Washington, which is under stay-home orders through week's end.

House Democrats, who control the chamber, this month adopted a rule allowing a lawmaker to ask a colleague to vote on his or her behalf. One lawmaker has the ability to vote by proxy for up to 10 colleagues.

The lawsuit, filed Wednesday in U.S. District Court for the District of Columbia, argues that proxy voting is unconstitutional because the Constitution requires a quorum.

Huizenga called proxy voting a partisan maneuver and questioned why Congress can't meet as a whole if grocery, construction and manufacturing workers are safely doing their jobs.

"For more than 230 years, even amid pandemics, Congress has led by example and met in person to pass legislation and move our nation forward,” he said.

Mitchell said he spent Wednesday morning reviewing "The Federalist" — a collection of essays by three Founding Fathers arguing for adoption of the Constitution — and consulting with constitutional attorneys before deciding to sign on as a plaintiff.

"The rule as it was written and passed by the majority allows proxies to be utilized to establish a quorum. That is in effect saying the member is there when they are not present," Mitchell said.

Mitchell, who is 63 and has asthma, argued that most members of Congress are not at great risk to COVID-19. He is open to a form of remote voting in emergency situations that uses technology to determine a member is present and participating, he said.

"This coronavirus is not magically going away in the next few weeks, next few months, so we have to find a way to function," Mitchell said.

"I do not want to see people who truly have health concerns be unable to participate actively, but you’re not participating actively. You’re phoning it in. Just emailing in a proxy. You’re punching a card, you know?"

Levin, a freshman lawmaker, said he was voting by proxy to protect his immuno-compromised children; his 88-year-old father, former U.S. Rep. Sander Levin; "and my community as a whole." He designated Maryland Rep. Jamie Raskin to be his proxy.

"I want the House of Representatives to act like a 21st century body and be fully operational remotely during this pandemic," Levin said.

"Debating the rules changes after the fact only distracts from this important work, especially since the new rules simply allow us to function as before using new technology, and don’t change the balance of power or privileges between the majority and minority one iota." 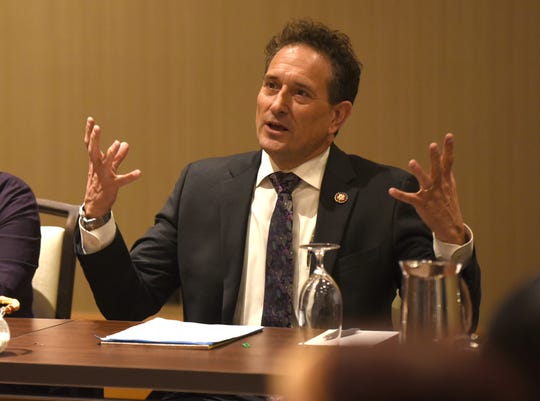 Congressman Andy Levin and Congresswoman Elissa Slotkin speak to federal employees as they haven't collected a paycheck due to the government shutdown during a round table meeting at Detroit Metropolitan Airport on Friday, January 11, 2019. (Photo: Max Ortiz, The Detroit News)

Tlaib‘s office notes she traveled to Washington several times during the pandemic to vote for priorities like legislation that bans water shutoffs and creates $1.5 billion for low-income water assistance.

Kildee said he directly receives specific instructions in writing and confirms the proxy vote by telephone.

"It’s proxy voting, but that’s a bit of a misnomer," he said. "Typically, the way people think about a proxy, they assume the person casting the vote has some discretion. In this case, it’s more like I’m delivering the vote of these members remotely to the floor."

Kildee stressed that the House has the ability to determine the rules and procedures of voting, and that the proxy voting is a "common-sense approach" for lawmakers who need or choose to protect themselves or people around them from the virus.

"Bottom line: It’s quite disingenuous what they are doing," Kildee said of his GOP colleagues.

"They were heavily engaged in discussion about this and were very much open to it, and then President Trump gave them their marching orders, and they are marching right behind him. It’s very unfortunate."