Washington – Former Deputy Attorney General Rod Rosenstein is defending his decision to appoint a special counsel to scrutinize ties between Donald Trump’s 2016 presidential campaign and Russia, telling senators Wednesday that he thought it was the best way to complete the investigation appropriately and ensure public confidence in its conclusions.

Rosenstein was appearing before the Senate Judiciary Committee at the first in a series of oversight hearings that coincide with accelerated election-year efforts to review the FBI’s Russia investigation.

In this May 9, 2019, file photo, then-Deputy Attorney General Rod Rosenstein speaks during a farewell ceremony in the Great Hall at the Department of Justice in Washington. Senate Republicans are planning to press Rosenstein on his oversight of the Russia investigation in the first in a series of oversight hearings that coincides with accelerated election-year efforts to scrutinize the FBI probe. (Photo: Andrew Harnik, AP, File)

Republican allies of the president have taken fresh aim in recent months at that investigation and at the law enforcement and intelligence officials who conducted it. They point to newly declassified information to allege that Trump and his associates were unfairly pursued, and are at time advancing unsupported theories against Obama administration officials. They also are claiming vindication from the Justice Department’s decision to drop its case against Michael Flynn, Trump’s former national security adviser.

The hearing, called by the committee chairman, Sen. Lindsey Graham, R-S.C., is also a GOP effort to refocus public attention on the Russia investigation at a time when Trump is facing public scrutiny over his handling of the coronavirus pandemic and unrest in American cities set off by the death of George Floyd.

Though Rosenstein was a Trump appointee, he has often been regarded with suspicion by many supporters of the president, and Trump himself, for his role in the Russia investigation. Rosenstein’s fate was most dramatically in limbo in September 2018 after it was revealed that he had floated the idea of wearing a wire inside the White House to record conversations with Trump. 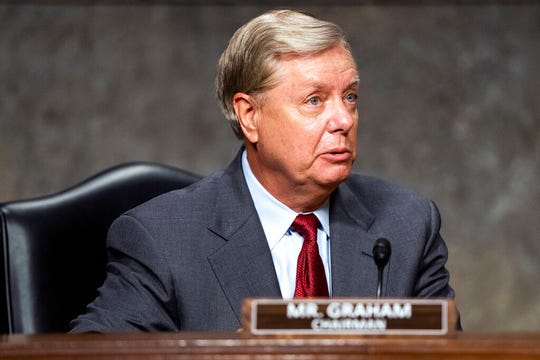 Rosenstein assumed oversight of the Russia investigation after then-Attorney General Jeff Sessions withdrew from the inquiry. Rosenstein appointed former FBI Director Robert Mueller as special counsel and then spent most of the next two years supervising his work, including approving key decisions, testifying in his defense and announcing criminal charges against Russians.

In his opening statement to the committee, Rosenstein planned to say that “as a result of events that followed the departure of the FBI director, I was concerned that the public would not have confidence in the investigation and that the acting FBI director was not the right person to lead it.”

“I decided that appointing a special counsel was the best way to complete the investigation appropriately and promote public confidence in its conclusions,” according to his prepared remarks.

Mueller’s report last year detailed significant contacts between Russia and the Trump campaign but did not allege a criminal conspiracy to sway the election. It examined about a dozen episodes for potential obstruction of justice by Trump, but did not reach a conclusion as to whether he broke the law, in part because Justice Department policy bars the indictment of sitting presidents.

Allies of the president in the last year have moved aggressively to rewrite the narrative of the investigation, particularly after a Justice Department inspector general report from last December identified significant errors and omissions in FBI applications to eavesdrop on a former Trump campaign aide.

Rosenstein approved one of those applications. The inspector general’s report said senior Justice Department officials were given incomplete information by the FBI.

“Every application that I approved appeared to be justified based on the facts it alleged, and the FBI was supposed to be following protocols to ensure that every fact was verified,” according to Rosenstein’s prepared remarks.

Flynn admitted lying to the FBI about his conversations with the Russian ambassador during the presidential transition period regarding U.S. sanctions. The Justice Department moved to dismiss the case last month, saying Flynn’s contacts with the diplomat were entirely appropriate and that the FBI had insufficient basis to interview him.

Graham has also questioned whether Mueller should have been appointed at all.