The Republican National Committee isn't quite ready to let go of Gov. Gretchen Whitmer's husband's pursuit of his boat during the COVID-19 pandemic.

The committee that is working to re-elect President Donald Trump is now funding koozies that will allow Michigan Republicans to commemorate the boat controversy while holding onto their beverages this summer.

About 500 koozies — foam sleeves meant to keep drinks cold — that say "Whitmer Yacht Club" with the image of a boat have been purchased, according to the committee headed by Northville's Ronna McDaniel.

"Lockdown for thee. Open waters for me," the text on the koozies adds. 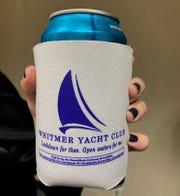 The merchandise is a reference to a call Whitmer's husband, Marc Mallory, made to a Northern Michigan dock company in May, seeking to get his boat launched for the Memorial Day weekend at the family's vacation home.

The request came as the Democratic governor was being floated as a potential running mate for former Vice President Joe Biden and as she was encouraging other Michigan residents not to "rush" to the Traverse City area. The Whitmer family's second home is about 30 minutes from Traverse City.

"I am the husband to the governor, will this make a difference?" Mallory allegedly told an employee of NorthShore Dock LLC when asking for his boat to be launched, according to a now-removed Facebook post from the company's owner, Tad Dowker.

Whitmer called her husband's comment a "failed attempt at humor" during a May 26 press conference. The governor's office didn't respond to a request for comment about the RNC-sponsored koozies.

The Republican National Committee says the koozies are meant to commemorate the 100th day since Whitmer first declared a state of emergency because of COVID-19, which was Thursday, and to celebrate the official start of summer. The governor has extended the state of emergency until July 16.

Trump Victory, the campaign effort to re-elect Trump, will distribute the koozies to volunteers in Michigan, according to the committee.

The Republicans are wasting time on "petty, partisan 'jokes,'" while Whitmer is working to keep Michigan families safe during the pandemic, said Timothy Carroll, spokesman for the Michigan Democratic Party.

"Thanks to the governor, Michigan is one of the only states nationwide on track to contain this virus," Carroll said. "Democrats will be focused on the work that matters, managing and resolving this crisis, and less on ridiculous distractions like 'koozies.' "