Washington – President Donald Trump on Thursday reluctantly dropped his bid to cut Social Security payroll taxes as Republicans stumbled anew in efforts to unite around a $1 trillion COVID-19 rescue package to begin negotiations with Democrats who are seeking far more.

Frustrating new delays came as the administration scrambled to avert the cutoff next week of a $600-per-week bonus unemployment benefit that has helped prop up the economy while staving off financial disaster for millions of people thrown out of work since the coronavirus pandemic began.

Trump yielded to opposition to the payroll tax cut among his top Senate allies, claiming in a Twitter post that Democratic opposition was the reason. In fact, top Senate Republicans disliked the expensive idea in addition to opposition from Democrats for the cut in taxes that finance Social Security and Medicare. 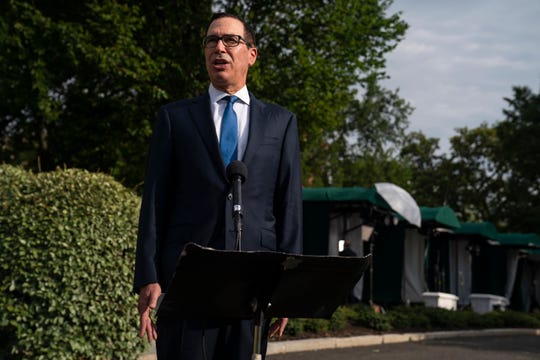 “The Democrats have stated strongly that they won’t approve a Payroll Tax Cut (too bad!). It would be great for workers. The Republicans, therefore, didn’t want to ask for it,” Trump contended.

“The president is very focused on getting money quickly to workers right now, and the payroll tax takes time,” Treasury Secretary Steven Mnuchin said at the Capitol. Only Sunday, Trump said in a Fox News interview that “I would consider not signing it if we don’t have a payroll tax cut.”

The long-delayed legislation comes amid alarming new cases in the virus crisis. It was originally to be released Thursday morning by Senate Majority Leader Mitch McConnell. But the Kentucky Republican instead hosted an unscheduled meeting with Mnuchin and White House acting chief of staff Mark Meadows and delayed the planned release of the proposal until next week.

The rocky developments coincide with a higher-profile role by Meadows, a former tea party lawmaker from North Carolina with a thin legislative resume. The delays increase the chances that efforts to pass the COVID rescue, the fifth coronavirus response bill this year, could drag well into August as both parties are formally nominating their presidential candidates.

Mnuchin claimed there was “fundamental agreement” on the GOP side, but irritation was growing among Republicans with the Trump negotiating team, which floated the idea of breaking off a smaller bill that would be limited to maintaining some jobless benefits and speeding aid to schools. Democrats immediately panned that idea, saying it would strand other important elements such as aid to state and local governments.

As a practical matter, Democrats say, the only way to prevent a cutoff of the pandemic jobless benefit next month is to simply extend it in full, at least in the short term. Balky and ancient state unemployment systems can’t be adjusted in time to immediately implement a new compromise.

“Due to ancient technology, states need between one and four weeks to adjust the $600 boost. At this late hour, the only option to guarantee benefits do not lapse is the Democratic plan to extend the $600 weekly benefit,” said top Finance Committee Democrat Ron Wyden of Oregon. “Republicans rejected that plan outright. They were never serious about preventing a lapse in benefits.”

McConnell scrapped a choreographed rollout that would have featured Republicans with tough reelection races claiming credit for provisions like a $15 billion appropriation for child care assistance for parents trying to go back to work while many schools will remain closed this fall.

McConnell now says the rollout won’t come out until next week.

“Our Republican colleagues have been so divided, so disorganized and so unprepared that they have to struggle to draft even a partisan proposal within their own conference,” said Democratic leader Chuck Schumer.

The must-have centerpiece for McConnell is a liability shield to protect businesses, schools and others from coronavirus-related lawsuits.

The still-unreleased GOP measure does forge an immediate agreement with Democrats on another round of $1,200 checks to most adults.

The $600 weekly unemployment benefit boost that is expiring Friday would be cut back, and Mnuchin said it would ultimately be redesigned to provide a typical worker 70% of his or her income. Republicans say extending it in full would be a disincentive to work.

“You can’t continue to pay people more to not work than to work,” said Sen. John Barrasso of Wyoming.

The Republican package will also include tax breaks for businesses to hire and retain workers and to help shops and workplaces retool with new safety protocols. A document circulating among lobbyists claims the package would increase the deduction for business meals to 100%, offering help to the restaurant industry.

Mnuchin said there is bipartisan agreement on changes to a popular subsidy program for businesses called the Paycheck Protection Program that would permit businesses especially hard hit by the pandemic – companies with fewer than 300 workers and revenue losses of 50% – to receive a second PPP payment.

A breakthrough on $25 billion in virus-testing money was key after days of wrangling between Republicans on the powerful Appropriations Committee and the White House. There will also be $26 billion for vaccines and $15 billion for research programs at the National Institutes of Health.

At the White House, Trump touted the GOP plan’s massive $105 billion to help schools and universities reopen. It contains $70 billion to help K-12 schools reopen, $30 billion for colleges and $5 billion for governors to allocate. Trump said he wants the school money linked to reopenings. In McConnell’s package, the money for K-12 would be split between those that have in-person learning and those that don’t.

If local public schools don’t reopen, the money should go to parents to send their children to other schools or teach them at home, Trump said. “If the school is closed, the money should follow the student,” he said.

Democrats back a much more sweeping package, including almost $1 trillion for state and local governments. They also want a fresh round of mortgage and rental assistance and new federal health and safety requirements for workers – ideas strongly opposed by Republicans.

Congress in March approved a massive $2.2 trillion CARES package, the biggest of its kind in U.S. history. The current effort, once Democratic priorities are added, is likely to total almost $2 trillion.

GOP conservatives are already squirming at the price tag, signaling that this bill won’t have anywhere new the unanimous support that the CARES Act had in March. The deficit for the 2020 budget year is already topping $2.7 trillion.