Michigan Supreme Court has denied paying Davontae Sanford an additional $27,000 in wrongful detention aid, according to a ruling released Thursday

The Michigan Supreme Court has denied Davontae Sanford an additional $27,000 in wrongful detention aid, according to a ruling released Thursday.

Sanford's murder convictions in Wayne County were set aside because of police misconduct. Sanford was paid $408,000 for the more than eight years he spent in prison but also wanted money for 198 days spent in a detention center for teens as part of his detention prior to trial.

The court in a 4-3 vote along philosophical lines ruled he was not entitled to the additional $27,000 in compensation before his conviction "because his preconviction detention was not “wrongful under the statute." 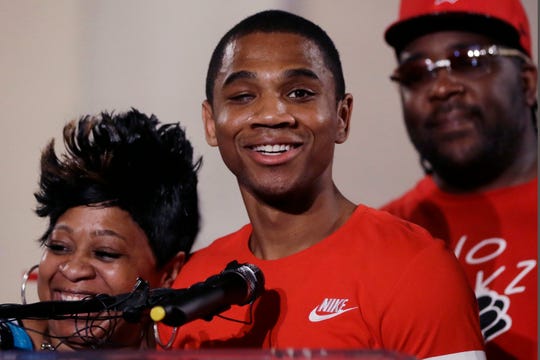 In this June 9, 2016, file photo, Davontae Sanford stands with his mother, Taminko Sanford, and addresses the media during a news conference in Detroit, a day after being released from prison. (Photo: Carlos Osorio, AP)

Sanford was 14 years old in 2007 when he was arrested for a quadruple homicide in a Detroit drug house. Sanford argued that police tricked him into confessing to the crime and that his defense attorney, who was later disbarred for unethical behavior, pressured him to plead guilty to second-degree murder because the lawyer said he knew the judge, who’d hand down a light sentence.