Lansing — A bipartisan group of Michigan lawmakers wants the state to calculate its expenses tied to the COVID-19 pandemic and send a bill to China, where the virus first appeared.

On Thursday, Rep. Beau LaFave, R-Iron Mountain, introduced a measure that would require the state to send "an itemized statement of the damages, costs, expenses and other losses" spurred by the COVID-19 pandemic to China.

LaFave, a conservative lawmaker from the Upper Peninsula, rejected the idea the proposal is symbolic, saying there are ways to make China pay the resulting bill. He declined to detail the ideas Friday because he said the country might take steps to counter them.

"No, this is not symbolism," LaFave said. "But if it were symbolism, it would be good symbolism."

"The reason the virus got to our shores in the first place is not a partisan issue," LaFave said. "We all know it's because of China."

The first human cases of COVID-19 were reported in Wuhan, China, in December 2019, according to an April report from the World Health Organization. A June 5 report from scientists at the U.S. Centers for Disease Control and Prevention suggested the virus began spreading in the United States in late January or early February "likely resulting from the importation of a single lineage of virus from China." 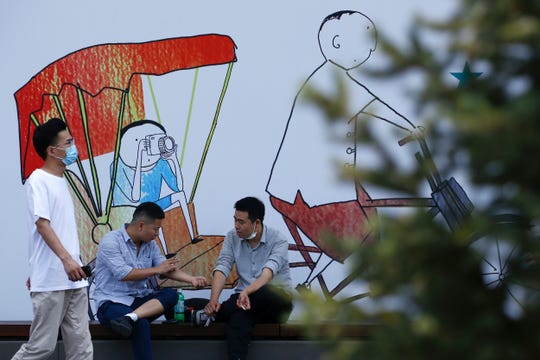 A man wearing a face mask to protect against the new coronavirus walks by people smoking near a mural in Beijing, Thursday, July 23, 2020. China continues to see new cases of coronavirus in the northwestern region of Xinjiang. The outbreak has been focused on the regional capital, Urumqi, where city leaders have restricted travel, locked down some communities and ordered widespread testing. (Photo: Andy Wong, AP)

Michigan was among the U.S. states hit hardest by the virus in the spring. It now ranks 13th nationally for cases and seventh for deaths linked to it. As of Thursday, Michigan reported 75,947 total confirmed COVID-19 cases and 6,148 deaths.

The virus and economic restrictions put in place to stem its spread have caused record unemployment claims in Michigan and a $3 billion hole in the state's current budget.

LaFave cited his time at Wayne State University Law School when asked how he got the idea for the bill. Individuals who cause death, destruction or loss of life can be held accountable in civil court, he said.

China downplayed the virus and "actively covered it up," LaFave argued.

The Michigan House's GOP leadership referred his bill to the Military, Veterans and Homeland Security Committee, which LaFave chairs. He didn't commit Friday to holding a hearing on the measure.