The massive effort by political parties, super PACs and other organizations to fight over whether Americans can vote by mail is remarkable considering the practice has long been noncontroversial

Washington – Deep-pocketed and often anonymous donors are pouring over $100 million into an intensifying dispute about whether it should be easier to vote by mail, a fight that could determine President Donald Trump’s fate in the November election.

In the battleground of Wisconsin, cash-strapped cities have received $6.3 million from an organization with ties to left-wing philanthropy to help expand vote by mail. Meanwhile, a well-funded conservative group best known for its focus on judicial appointments is spending heavily to fight cases related to mail-in balloting procedures in court.

And that’s just a small slice of the overall spending, which is likely to swell far higher as the election nears. 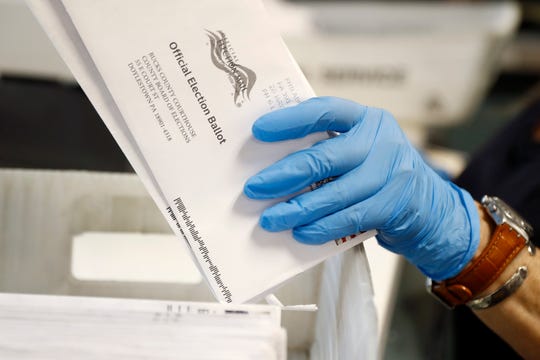 A worker processes mail-in ballots at the Bucks County Board of Elections office prior to the primary election in Doylestown, Pa. on May 27, 2020. (Photo: Matt Slocum, AP)

The massive effort by political parties, super PACs and other organizations to fight over whether Americans can vote by mail is remarkable considering the practice has long been noncontroversial. But the coronavirus is forcing changes to the way states conduct elections and prompting activists across the political spectrum to seek an advantage, recognizing the contest between Trump and Democrat Joe Biden could hinge on whether voters have an alternative to standing in lines at polling places during a public health crisis.

Some groups are even raising money to prepare for election-related violence.

“The pandemic has created a state of emergency,” said Laleh Ispahani, the U.S. managing director for Open Society, a network of nonprofits founded by billionaire progressive donor George Soros. “Donors who haven’t typically taken on these issues now have an interest.”

How much will be spent is unclear because many of the organizations are nonprofits that won’t disclose those details to the IRS until well after the election. Even then, many sources of money will remain unknown because such groups don’t have to disclose their donors, commonly referred to as “dark money.”

Tax filings, business records and campaign finance disclosures offer some clues. They reveal vast infrastructure that funnels money from wealthy donors, through philanthropic organizations and political groups, which eventually trickles down to smaller nonprofits, many of which operate under murky circumstances.

On the conservative side, organizations including Judicial Watch, the Honest Elections Project, True the Vote and the Public Interest Legal Foundation are litigating cases related to voting procedures across the U.S.

A substantial portion of the financing comes from Donors Trust, a nonprofit often referred to as the “dark money ATM” of the conservative movement. The organization helps wealthy patrons invest in causes they care about while sheltering their identities from the public.

In other instances, funding comes from charitable foundations built by the fortunes of Gilded Age industrialists.

Litigation is a primary focus. Democrats and good government organizations are pushing to eliminate hurdles to absentee voting, like requiring a witness’s signature or allowing third parties to collect ballots.

Conservatives say that amounts to an invitation to commit voter fraud. As these issues wind their way through courts, they say judges could decide complex policy matters that often were already debated by state legislatures.

“The wrong way to go about this is to run to court, particularly a week or two before an election, trying to get judges to intervene and second-guess decisions legislatures have made,” said Jason Snead, the executive director of the Honest Elections Project.

His organization is a newly formed offshoot of the Judicial Education Project, a group that previously focused on judicial appointments and received more than $25.3 million between 2016 and 2018 from the Donors Trust, records show. They are deeply intertwined with the conservative Catholic legal movement and share an attorney, William Consovoy, with the Republican National Committee, which has pledged $20 million for voting litigation.

Leonard Leo, a Trump confidant who was instrumental in the confirmations of the president’s Supreme Court nominees, plays a leading role. He’s now chairman of a public relations firm called CRC Advisors, which is overseeing a new effort to establish a clearinghouse for anonymous donors to fund conservative causes, including the fight over vote by mail.

The firm played a significant role in the 2004 election by publicizing unfounded claims made by a group called Swift Boat Veterans for the Truth, which questioned Democratic nominee John Kerry’s record as a Vietnam War hero, records show.

The group’s involvement in vote by mail marks a sea change for Republicans. Claims of widespread voter fraud have long energized segments of the party’s base. But it did not elicit much interest from donors, and the handful of groups devoted to the issue operated on minuscule budgets.

But in recent years, Democrats have mounted legal challenges that threatened voting laws championed by conservatives. And Trump’s repeated focus on “rigged elections” has made the issue part of a broader culture war.

Still, some activists question the GOP establishment’s commitment to the cause.

“They aren’t going to take on Republicans like we have,” said Catherine Engelbrecht, the founder of True the Vote.

While Republicans are focused on the courts and raising doubts about vote by mail, the challenge faced by Democrats is far more daunting.

In addition to litigation, they must mobilize their base during a pandemic. That includes educating the public about vote by mail, a difficult task when door-to-door canvasing isn’t an option.

Some groups are donating directly to local governments. In Wisconsin, the Center for Tech and Civic Life, a nonprofit with ties to left-leaning philanthropy, has donated $6.3 million to the state’s five largest cities to set up ballot drop boxes, help voters file absentee ballot requests and expand in-person early voting.

Even before the pandemic, government funding for elections was limited. Since then, the outbreak has escalated costs while cratering tax revenue. 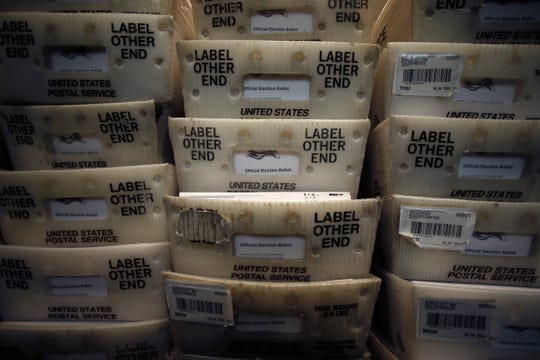 Processed mail-in ballots are seen at the Bucks County Board of Elections office prior to the primary election in Doylestown, Pa. on May 27, 2020. (Photo: Matt Slocum, AP)

“Due to COVID, there definitely has been a higher cost,” said Mayor John Antaramian, of Kenosha, which received $863,000 through the grant – roughly four times what the city budgeted for the election. “Is there a financial shortfall on that basis? Of course.”

Much of the money on the left is likely to come from a series of nonprofit funds controlled by the consulting firm Arabella Advisors, which typically routes upwards of $500 million a year to causes supported by liberal donors. The firm was founded by Eric Kessler, who served in Bill Clinton’s White House.

The firm has been instrumental in financing so-called resistance groups following Trump’s election. And some nonprofits they’ve provided seed money were responsible for millions of dollars in TV advertising that blistered Republicans during the 2018 midterms.

They’ve also pioneered the practice of creating “pop-up” organizations: groups that appear to be grassroots-driven efforts to influence public policy, which use trade names that obscure a deep pool of resources from those with ideological or financial motivations.

The firm recently registered a handful of trade names for groups that appear to be focused on voting rights, records show.

Another effort Arabella Advisors are involved in, the Trusted Elections Fund, aims to raise between $8 million and $10 million in case the pandemic leads to chaos in November.

The group is preparing for potential foreign hacking of state voting systems, “election day or post-election day violence,” as well as contested results.

A Trusted Elections Fund representative declined to comment. But a two-page summary available online elaborated on their aims.

“Philanthropy has a responsibility to make sure that we are prepared for emergencies that could threaten our democracy,” it read.