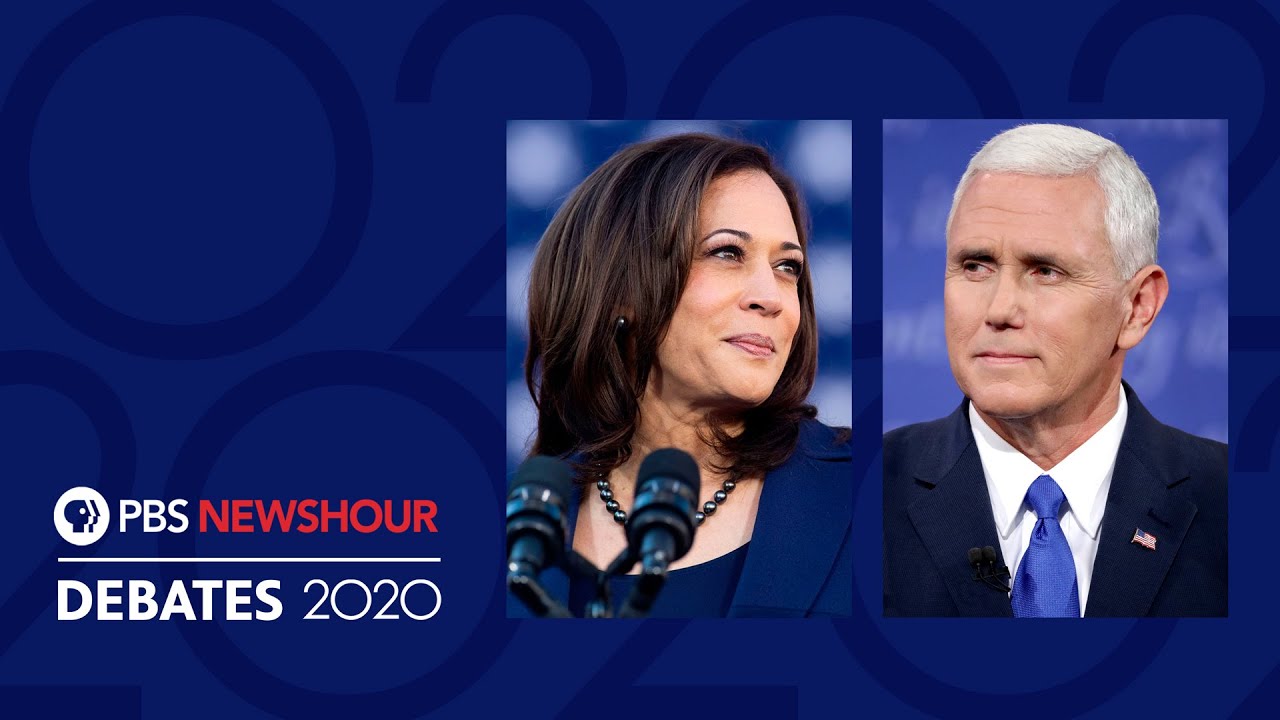 Harris, the Democrat from California who is former Vice President Joe Biden's running mate, opened the vice presidential debate by saying President Donald Trump's efforts to combat COVID-19 were "the greatest failure of any presidential administration in the history of our country."

Pence countered by emphasizing Trump's early action to suspend travel from China, deliver medical supplies to hospitals and push for a vaccine. He predicted the country would have "tens of millions of doses" of a vaccine before the end of the year.

Harris and Pence weighed in on whether justice was done in the grand jury decision involving the killing of Breonna Taylor, a Black medical worker in Louisville.

Harris said she's met with Taylor's family and doesn't believe justice was served and her family deserves it.

"She was a beautiful young woman. It was her life goal to become a nurse," she said. "Her life was taken unjustifiably and tragically and violently."

“People around our country of every race, of every age, of every gender, perfect strangers to each other marches shoulder-to-shoulder, arm-in-arm fighting for us to finally achieve that ideal of equal justice under law,” she said. “We always must fight for the values that we hold dear, including the fight to achieve our ideals.”

Harris, a former prosecutor, said she and Biden would reform policing in America and ban chokeholds. Without them, she argued, Floyd would still be alive.

Pence sent his sympathies to the Taylor family but said "I trust the justice system."

He then asserted that Harris is accusing the grand jury looking at the evidence in the case of getting it wrong.

He went on to say the actions of some in the county in response to the deaths of Taylor and Floyd were destructive.

"There's no excuse for the rioting and looting that followed," he said.

Pence said the ongoing claims of "systematic racism" from Harris and Biden and allegations of "implicit bias against minorities" is a "great insult to the men and women who serve in law enforcement."

Trump, she said, prefers to take the word of Vladimir Putin over the American intelligence community.

Pence countered that the Trump administration has “stood strong with our allies.”

“We’ve strengthened our alliances ... and stood strong against those who would do us harm," he said.

Trump, he said, “unleashed the American military” and took down Iraqi terrorist Abu Bakr al-Baghdadi, a man responsible for the deaths of thousands, he said.

He pointed to the family of deceased human rights activist Kayla Mueller, who was taken captive in 2013. Her relatives were attending the debate as guests of Pence.

"When Joe Biden was vice president, there was an opportunity to save her," said Pence, who accused Biden of hesitating and missing the chance.

"Her family says with the heart that broke the hearts of every American that if Donald Trump had been president she’d be alive today," he said.

Candidates at odds over climate change

Pence said he’s proud of the administration's record on the environment.

“Our air and land are cleaner than any time ever recorded,” Pence claimed.

"The climate is changing. The issue is: What’s the cause and what can we do about it? President Trump has made it clear that we're going to continue to listen to science."

Harris countered Biden has been clear about growing jobs, which is why he will not increase taxes for anyone who makes less than $400,00 a year.

“Joe understands the west coast of our country is burning, including my home state of California,” she said. “Joe believes, again, in science.”

Harris, a co-sponsor of the Green New Deal in the Senate, said Moody’s, the Wall Street firm, said Biden’s economic plan would create 7 million more jobs than Trump's, and part of those would be created from the clean and renewable energy industry.

Harris noted that the Trump administration took the word science “off the website.”

“And then took the phrase climate change off the website. We have seen a pattern with this administration which is they don't believe in science, and Joe's plan is about saying we're gonna deal with it, but we're also going to create jobs,” Harris said.

Harris led off the questioning, addressing what the Biden administration would do to bring COVID-19 under control.

administration in the history of our country," said Harris, noting more than 200,000 have died of the novel virus and over 7 million overall in the country have contracted it.

"The president said it was a hoax. They minimized the seriousness of it," she said. "In spite of all of that, today, they still don't have a plan."

Harris said Biden and their team have a national strategy with contract tracing, testing for the administration of the vaccine and making sure it'll be free for all people.

Pence, who heads the White House's coronavirus task force, tackled a question on why the death toll in the U.S. is so high.

The vice president acknowledged the nation has "gone through a very challenging time this year."

"But I want the American people to know from the very first day, President Donald Trump has put the health of Americans first," said Pence, noting Trump's early efforts to suspend travel from China and that Joe Biden "opposed that decision."

He said Trump's swift action enabled the federal government to ramp up testing and deliver billions of supplies to medical staff in need.

"The reality is when you look at the Biden plan, it reads an awful lot like what President Trump and I and our task force have been doing every the of the way," he said.

Pence, during the second round of questioning, snapped back at Harris’ “undermining.”

“We are going to have a vaccine in record time. In less than a year,” he said. “We are right now producing tens of millions of doses.”

The Plexiglass at the University of Utah debate hall caused a stir: Harris’ team requested they be used after President Donald Trump was diagnosed with COVID-19 shortly after his first presidential debate against Democrat Joe Biden.

Pence’s team, meanwhile, insisted they were not medically necessary, an objection that came as Trump returned to the White House. The Trump campaign is trying to move past the virus despite the president’s own diagnosis.

Other reminders that these are not normal times for a vice presidential debate: 20 chairs for guests were spaced roughly 6 feet apart in the debate hall, a performing arts center on the University of Utah campus. The auditorium’s balcony was filled with university students, donors and other guests, who sat in traditional theater seats, though there were at least two empty seats between guests.

Staff took guests’ temperatures upon entrance into the hall and asked people to sanitize their hands. Wearing a mask was required. Even the network TV cameras had Plexiglass wrapping on the sides and back.​

A disclaimer on the back of the debate tickets said the “holder relieves” the event’s organizer, the Commission on Presidential Debates, as well as the debate’s “site host of any and all liability of any kind of character … including COVID-19.”

Pence’s guests in the debate hall were meant to convey a “law and order” message that has been a centerpiece of the Trump campaign.

They included Ann Marie Dorn, the widow of retired St. Louis police captain David Dorn, who was shot and killed on June 2 after a violent night of protests. She also spoke at the Republican National Convention.

The vice president was also joined by Flora Westbrooks, whose Minneapolis hair salon was burned down in May during protests over George Floyd’s killing by police. Also there on Pence’s behalf were the parents of Kayla Mueller, a humanitarian aid worker who was taken captive and killed by Islamic State militants.

This debate expected to be different

Pence and Harris will square off at 9 p.m. Wednesday at the University of Utah in their first and only debate.

Political observers expect a match-up with a much different feel than the combative presidential debate a week earlier.

"My guess is that both are going to try to go above and beyond to be professional and show dignity and respect," said Jenell Leonard, a Republican and owner of the Lansing-based consulting firm Marketing Resource Group.

The debate stage features three desks and chairs, about 12 feet apart and separated with Plexiglass screens for the two candidates and the moderator, USA Today’s Washington bureau chief Susan Page, according to pool reports.

Outside the performing arts center, Justin Ravago, a 19-year-old undergraduate from Boise, Idaho, said he's looking for a "proper sort of debate."

"Last week was not so great," Ravago said. "I want to hear what they have to say rather than a crossfire of words."

On Sept. 29, President Donald Trump and Democrat Joe Biden frequently clashed and spoke over each other in their first debate in Cleveland. The Republican incumbent repeatedly interrupted the former vice president with Biden asking Trump to "shut up" at one point.

The vice presidential debate comes less than a week after Trump himself revealed he had tested positive for COVID-19 and spent three nights at the Walter Reed National Military Medical Center.