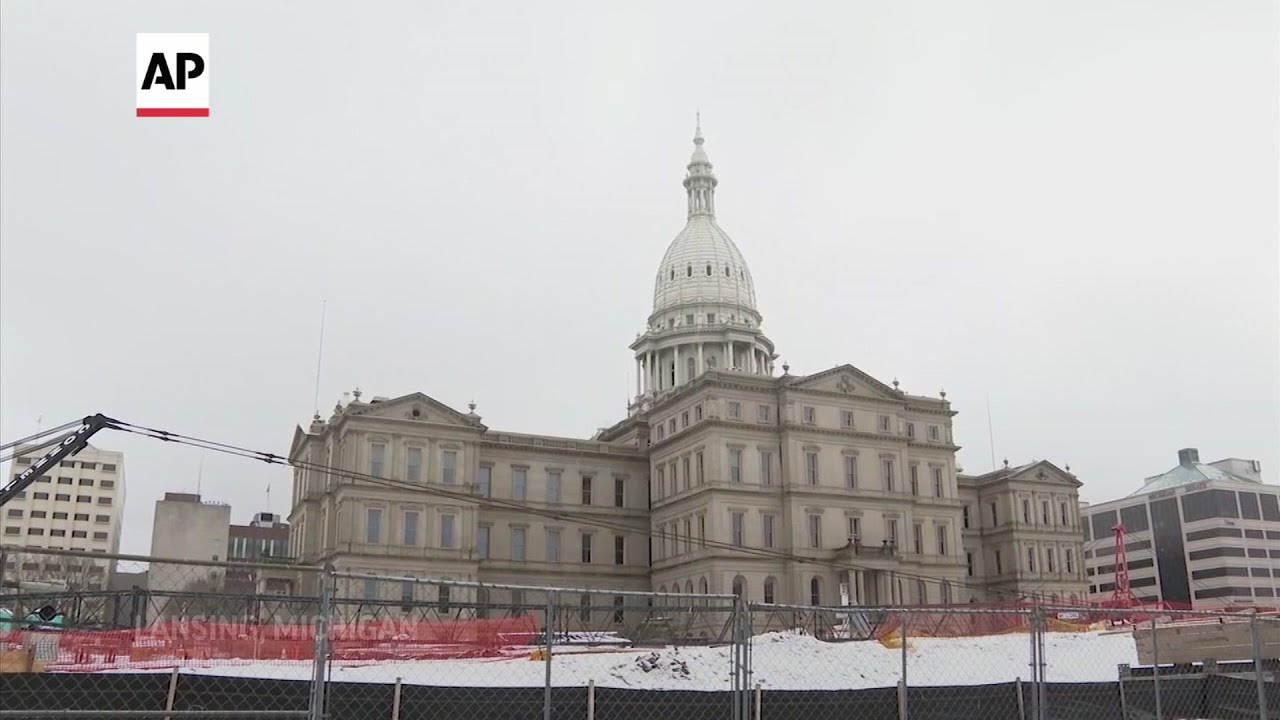 Lansing — A protest at the Michigan Capitol drew about a dozen armed demonstrators and a heavy police presence but remained peaceful Sunday, three days before Democratic President-elect Joe Biden's inauguration.

With dozens of Michigan State Police troopers and National Guard members looking on, the protesters carrying AR-15 rifles joined a small group of other demonstrators at the Capitol at about noon. Law enforcement officials said they were prepared for "the worst" to occur amid unrest over the Nov. 3 election, but the reporters present appeared to outnumber the protesters.

"It has all stayed peaceful. Everything has been calm," Lansing Mayor Andy Schor said at about 3 p.m. after most of the crowd had dissipated.

Schor said there had been no arrests and no incidents of violence. Lansing Police Chief Daryl Green estimated the crowd at about 150 people.

The Sunday event came 11 days after supporters of Republican President Donald Trump stormed the U.S. Capitol in Washington, D.C., as Congress met to count electoral votes. Lawmakers had to evacuate their chambers, two individuals died in clashes, three people died in medical emergencies, dozens of people were arrested and the Federal Bureau of Investigation continues to probe the insurrection.

Among the protesters Sunday in Lansing was Timothy Teagan, 22, of Plymouth, who identified himself as a "boogaloo boy." Teagan, who was carrying an AR-15 rifle, said the group had a "unity" event scheduled for Sunday for more than a month.

"The government and media have published stories that today the boogaloo has planned assaults on all 50 state capitals, so it is even more necessary for us to be out here to disprove their claims," Teagan said.

Eric Mark-Matthew Allport, a 43-year-old Madison Heights resident, was killed in an October shootout with federal agents and was hailed by believers of the anti-government "boogaloo" movement as a member and martyr. "Boogaloo" is a loosely organized movement that brings together people with different ideologies — from the Black Lives Matter movement to white supremacists and anti-government extremists, said Jon Lewis, a research fellow at the Program on Extremism at George Washington University.

Officials said they wanted to be "over-prepared" for Sunday's demonstration. The police presence in Lansing was the largest since protests over a right-to-work law approved in 2012, said Mike Shaw, a spokesman for the Michigan State Police.

About 100 troopers — some wearing face shields — walked in a group at about 9 a.m. from a nearby parking garage toward the Capitol, where they were given equipment. From there, smaller groups of troopers went to different buildings in the downtown area, including the office building of the Michigan Senate.

In addition to the troopers, military style vehicles were parked Sunday morning west of the Capitol building in a plaza area where state employees take breaks or eat their lunches during normal times. A helicopter flew above the Capitol for much of the day.

"Our No. 1 goal is to protect the Capitol and make sure that people are allowed to air their grievances safely," Shaw said. "Our concern becomes when somebody crosses that line.

"If you decide that you're going to damage the building, assault somebody, either a police officer or a media person or a person who doesn't have exactly the same views as you, that takes you from a First Amendment protester to a criminal."

A few minutes after the protest's scheduled noon start, Shaw was asked to provide an update. He nodded at a gaggle of reporters and said, "There's more media here than protesters."

Schor described the event as a "nonviolent protest."

"We're used to protesters. We get protesters all the time," Schor said. "We hope for the best, prepare for the worst. Right now, we're seeing a standard protest."

Wayne Koper, 66, of Caro, who said he's a supporter of U.S. Sen. Bernie Sanders, the Vermont independent who describes himself as a democratic socialist, carried a Nerf gun on the Capitol lawn, mocking the demonstrators who held actual firearms. He wore a shirt that said "Michigan Nerf Militia."

Asked how he would describe the event, Koper said a "circus but not as entertaining."

One of the gun-carrying protesters told reporters his name was Duncan Lemp — a 21-year-old man who died in Maryland in March and has been touted as a martyr for the "boogaloo" movement.

“The majority of the movement just wants peace. When people act out, it proves to the media what they are trying to push on us," the man said while carrying a rifle and pistol.

Other protesters voiced myriad concerns. One man held a sign depicting Trump holding the Israeli flag in one hand and a menorah in the other, with the caption, "Hey, Donald! I thought you said America First!"

Kyle Lappee, 31 of South Lyon said he came to Lansing "because there's a lot of wrong in this country, starting with our government having too many ties to the Chinese Communist Party. I came here to make my voice heard."

In preparation for potential unrest, Gov. Gretchen Whitmer activated the Michigan National Guard, and a fence was erected around the state Capitol building. The first-floor windows of the George W. Romney Building, which houses the governor's offices, and other retail storefronts in downtown Lansing were boarded up.

The city of Lansing closed off streets Sunday morning surrounding the Capitol. Green of the Lansing police encouraged residents to avoid the downtown area Sunday unless they had an "intentional purpose" to be there.

"The city of Lansing is prepared," Green said Friday. "We are very confident about our preparedness.”

The FBI last week warned of plans for armed protests at all 50 state capitals and in Washington, D.C. Fliers sent to lawmakers indicated there would be an armed march Sunday on the Michigan Capitol.

In Washington, the streets had an eerie quiet but were filled with curious pedestrians but no apparent protesters on Sunday amid a heavy presence of National Guard and police officers.

Special agent Tim Waters of the FBI's Detroit Division said the agency has opened "numerous investigations" in Michigan related to people involved in the insurrection at the U.S. Capitol on Jan. 6.

Maj. Gen. Paul Rogers of the Michigan National Guard said "elements" of the guard had been activated to help protect people, facilities and key infrastructure. Rogers declined to identify the number of personnel participating.

"I will ensure you that our response is significant," Rogers said.

Because of the COVID-19 pandemic, the Michigan Capitol is only open to the public when there is official business taking place inside. Last Monday, the Michigan Capitol Commission voted to ban the open carry of guns inside the building, which has experienced a series of protests over the last 10 months.