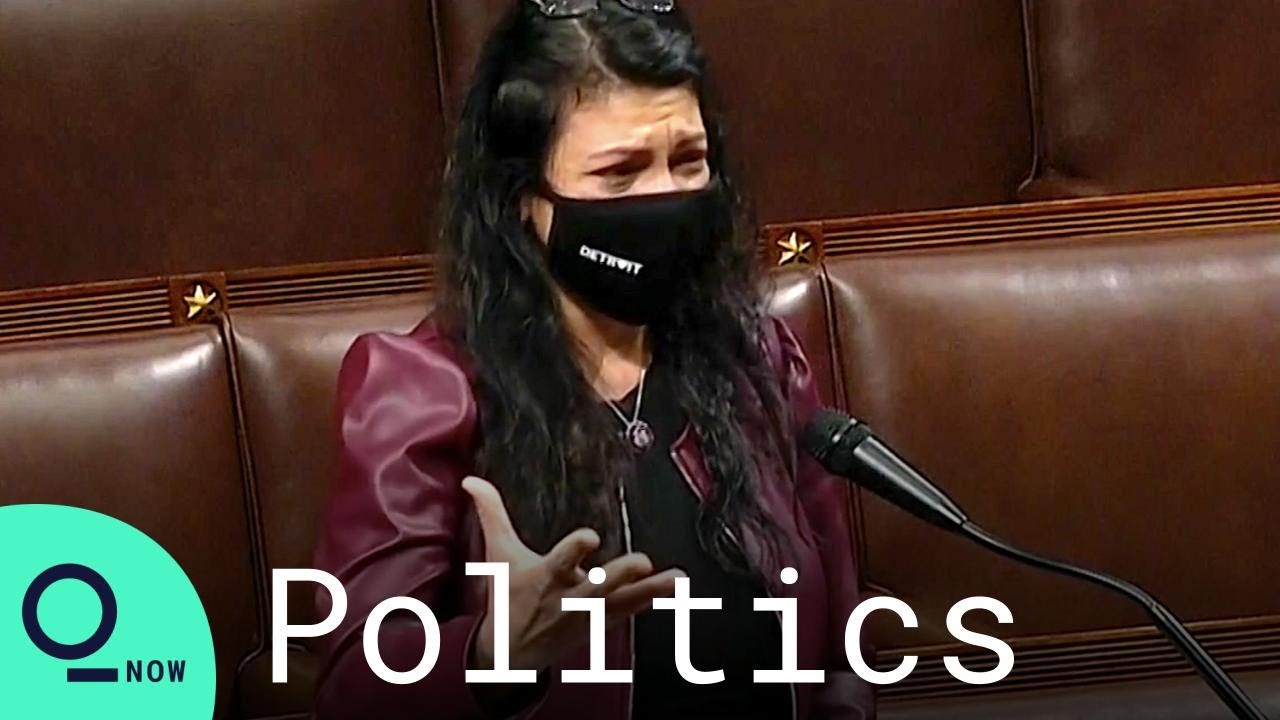 Washington — U.S. Rep. Rashida Tlaib made an emotional floor speech this week in which she pleaded with her Republican colleagues in Congress to take seriously the Jan. 6 attack on the U.S. Capitol.

The Detroit Democrat spoke near the end of an hour of lawmaker speeches Thursday reflecting on the riot in which five people died nearly a month ago. She recounted the many death threats she has received during her time in Congress and said she worries about the lives of her staff on Capitol Hill.

"I never thought that they would feel unsafe here. And so I asked my colleagues to please try not to dehumanize what's happening. This is real," she added, referencing incidents of violence in Charlottesville, Virginia, in 2017 and the mass shooting at a Pittsburgh synagogue in 2018.

"All of it is led by hate rhetoric like this," Tlaib said. "So I urge my colleagues to please, please take what happened on Jan. 6 seriously. It will lead to more death. And we can do better. We must do better."

Tlaib said afterward that she decided to speak about the threats because a lot of her colleagues are also now getting them.

The second-term congresswoman blamed rhetoric coming from the right, as she glanced at the Republican side of the chamber during her speech. Tlaib's remarks followed a vote in the Democratic-led House Thursday to strip GOP U.S. Rep. Marjorie Taylor Greene of Georgia of her committee roles over past inflammatory remarks.

"On my very first day of orientation, I got my first death threat. It was a serious one. They took me aside. The FBI had to go to the gentleman's home," said Tlaib, who is Muslim. "I didn't even get sworn in yet, and someone wanted me dead for just existing."

More threats came, she added, "Uglier and more violent." One "celebrated" the massacre at a New Zealand mosque in 2019, hoping that "more would come," she recalled.

Tlaib said her staff ultimately decided to report and document the threats but to keep word of them from her because "It just paralyzed me."

"It's hard when my seven brothers and six sisters begged me to get protection, many urging me to get a gun for the first time. And I have to tell you: The trauma from just being here existing as a Muslim is so hard," she said.

Tlaib wasn't at the Capitol during the attack on Jan. 6, as she was sick at home due to an adverse reaction to the COVID-19 vaccine.

"I wasn't here. I felt overwhelming relief, and I feel bad for Alexandria (and) so many of my colleagues that were here," she said, referring to New York Rep. Alexandria Ocasio-Cortez, the New York Democrat who stepped over to comfort Tlaib during her speech. "But as I saw it, I thought to myself, 'Thank God I'm not there.'"

Watching her colleagues grapple with the trauma of Jan. 6 reminded her of the vulnerability and "constant fear" she felt during her first six months in office in 2019, she said after her speech.

"We all have been traumatized, and we really want to be able to focus on how to combat this type of hate rhetoric and be able to do the work that we were elected to do," Tlaib said in a Friday interview.

"The attack on the Capital is a constant thought right now. For not only myself, but I think for many. I can't walk around this complex now without a sense of fear at this moment."

Many Republican lawmakers unequivocally denounced the violent assault on the Capitol on Jan. 6. Five people, including a Capitol Police officer, died in the chaos. Rioters beat police officers, ransacked the building and forced lawmakers into hiding for hours.

The top House Republican, Kevin McCarthy of California, this week disavowed Greene’s past comments embracing violence against liberals and conspiracy theories about the Sept. 11 terror attacks and mass school shootings being hoaxes.

But Democrats were angered in recent days when GOP leaders didn't act to punish Greene, and they voted Thursday to expel her from her committee assignments. Greene spoke on the House floor and distanced herself from some of her past statements but did not explicitly apologize. "I walked away from those things," she said.

Greene said Friday that Ocasio-Cortez had "Faked her outrage with another hoax" in speaking out about her experience at the Capitol on Jan. 6 when she hid in her office as someone was aggressively banging on the door to get in.

Greene said "everyone here" knows that former President Donald Trump did not cause the attack on the Capitol.

"Nor did I. Nor did any Republican," she said. "But the responsibility falls squarely on those that invaded the Capitol. The ones that planned it ahead of time. Those are the people that should be held accountable."

Greene told reporters that she didn't condone the Jan. 6 attack. "It was one of the scariest days of my life," she said.

But Greene said Trump supporters are "Tired of being attacked because they want to wear a red hat that says Make America Great Again, or they voted for Trump and we're proud of it."

"Things have got to change, and I tell you again. I'm fine with being kicked off of my committees because it'd be a waste of my time," she said.

Asked why she didn't explicitly apologize for her past statements Thursday, Greene said she was sorry, but again criticized Black Lives Matter protests, "Where cities were burned, people were attacked, police officers (are) still dealing with it.

"I'm sorry for saying all those things that are wrong and offensive, and I sincerely mean that," Greene said.

Tlaib had noted earlier that Greene had run campaign ads last fall of her holding an assault rifle next to photos of Tlaib and Rep. Ilhan Omar of Minnesota — the first two female Muslim members of the House.

"Every single day that goes by without outright condemnation from every single one of her Republican colleagues without consequences for her extremist views is an outright endorsement of White supremacy."