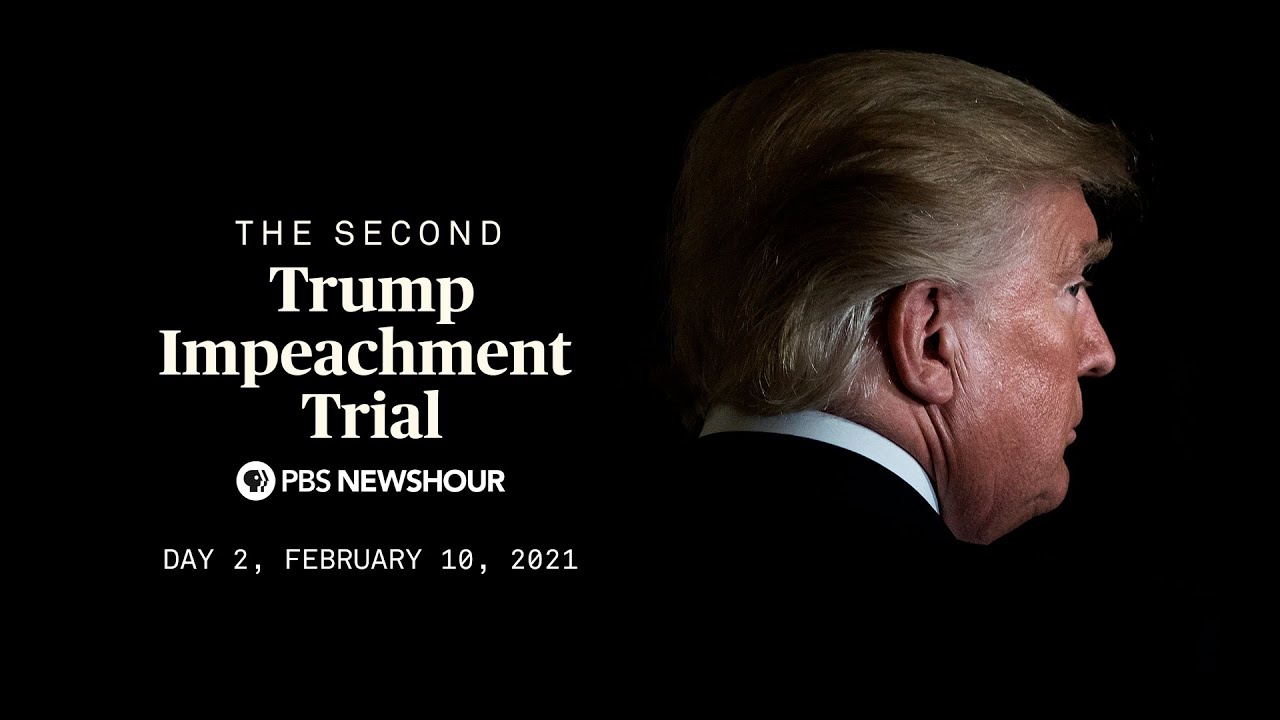 In the previously unreleased recordings, the House prosecutors displayed gripping scenes of how close the rioters were to the country’s leaders, roaming the halls chanting “Hang Mike Pence,” some equipped with combat gear. Outside, the mob had set up a makeshift gallows.

Videos of the siege have been circulating since the day of the riot, but the graphic compilation amounted to a more complete narrative, a moment-by-moment retelling of one of the nation’s most alarming days. In addition to the evident chaos and danger, it offered fresh details on the attackers, scenes of police heroism and cries of distress. And it showed just how close the country came to a potential breakdown in its seat of democracy as Congress was certifying Trump’s election defeat to Democrat Joe Biden.

“They did it because Donald Trump sent them on this mission,” said House prosecutor Stacey Plaskett, the Democratic delegate representing the U.S. Virgin Islands. “His mob broke into the Capitol to hunt them down.”

The stunning presentation opened the first full day of arguments in the trial as the prosecutors argued Trump was no “innocent bystander” but rather the “inciter in chief” of the deadly Capitol riot, a president who spent months spreading election lies and building a mob of supporters primed for his call to stop Biden’s victory.

Though most of the Senate jurors have already made up their minds on acquittal or conviction, they were riveted and sat silently. Screams from the audio and video filled the Senate chamber. One Republican, James Lankford of Oklahoma, bent his head, a GOP colleague putting his hand on his arm in comfort.

“On Jan. 6, President Trump left everyone in this Capitol for dead,” said Rep. Joaquin Castro, D-Texas, a prosecutor.

Rep. Eric Swalwell, one of the impeachment managers, played a video clip recorded by Rep. Dan Kildee, D-Flint Township, taken while he and other lawmakers are trapped in the House gallery on Jan. 6. In the video, someone advises the lawmakers to remove the round pins that identify them as members of Congress.

“Pins off!” Kildee says in the video, passing the message to others.

Then the sound of a gunshot rings out. It was a Capitol police officer shooting a rioter just outside the chamber below. His video captures Kildee remarking, “What the f---?”

The video clip ends, and Swalwell told senators at the trial: “Out of fear that they’d be seen or taken by the mob, my colleagues were telling one another to take off their congressional pins.”

Pence, who had been presiding over a session to certify Biden’s victory over Trump – thus earning Trump’s criticism – is shown being rushed to safety, sheltered in an office with his family just 100 feet from the rioters. Pelosi was evacuated from the complex before the mob prowls her suite of offices, her staff hiding quietly behind closed doors.

At one dramatic moment, the video shows police shooting into the crowd through a broken window, killing a San Diego woman, Ashli Babbitt. In another, a police officer is seen being crushed by the mob.

Police overwhelmed by the rioters frantically announce “we lost the line” and urge officers to safety. One officer later died.

Some senators acknowledged it was the first time they had grasped how perilously close the country came to serious danger.

“When you see all the pieces come together, just the total awareness of that, the enormity of this threat, not just to us as people, as lawmakers, but the threat to the institution and what Congress represents, it’s disturbing,” said Republican Sen. Lisa Murkowski of Alaska. “Greatly disturbing.”

Trump is the first president to face an impeachment trial after leaving office and the first to be twice impeached. He is charged with incitement of insurrection through fiery words his defense lawyers say are protected by the Constitution’s First Amendment and just figures of speech.

The House Democrats showed piles of evidence from the former president himself – hundreds of Trump tweets and comments that culminated in his Jan. 6 rally cry to go to the Capitol and “fight like hell” to overturn his defeat. Trump then did nothing to stem the violence and watched with “glee,” they said, as the mob ransacked the iconic building.

“To us, it may have felt like chaos and madness, but there was method to the madness that day,” said Rep. Jamie Raskin, D-Md., the lead prosecutor, who pointed to Trump as the instigator.

“And when his mob overran and occupied the Senate and attacked the House and assaulted law enforcement, he watched it on TV like a reality show. He reveled in it.”

In one scene, a Capitol Police officer redirects Sen. Mitt Romney, R-Utah, down a hallway to avoid the mob. It was the same officer, Eugene Goodman, who has been praised as a hero for having lured rioters away from the Senate doors.

“It tears at your heart and brings tears to your eyes,” Romney said after watching the video. He said he didn’t realize how close he had been to danger.

The day’s proceedings unfolded after Tuesday’s emotional start that left the former president fuming when his attorneys delivered a meandering defense and failed to halt the trial on constitutional grounds. Some allies called for yet another shakeup to his legal team.

The prosecutors are arguing that Trump’s words were part of “the big lie” – his relentless efforts to sow doubts about the election results, revving up his followers to “stop the steal” even though there was no evidence of substantial fraud.

Trump knew very well what would happen when he took to the microphone at the outdoor White House rally that day as Congress gathered to certify Biden’s win, said Rep. Joe Neguse, D-Colo, another impeachment manager.

“This was not just a speech,” he said.

Security remained extremely tight Wednesday at the Capitol, fenced off and patrolled by National Guard troops.

White House press secretary Jen Psaki has said Biden would not be watching the trial.

The difficulty facing Trump’s defenders became apparent at the start as they leaned on the process of the trial rather than the substance of the case against him. They said the Constitution doesn’t allow impeachment at this late date, after he has left the White House.

Even though the Senate rejected that argument in Tuesday’s vote to proceed, the legal issue could resonate with Republicans eager to acquit Trump without being seen as condoning his behavior.

Defense lawyer Bruce Castor encouraged senators on Tuesday to be “cool headed” as they assessed the arguments.

A frustrated Trump revived his demands for his lawyers to focus on his unsupported claims of voter fraud, repeatedly calling former White House aide Peter Navarro, who told the AP in an interview that he agreed. He is calling on Trump to fire his legal team.

“If he doesn’t make a mid-course correction here, he’s going to lose this Super Bowl,” Navarro said, a reference to public opinion, not the unlikely possibility of conviction.

While six Republicans joined with Democrats to vote to proceed with the trial, the 56-44 vote was far from the two-thirds threshold of 67 votes that would be needed for conviction.

Minds did not seem to be changing, even after seeing the graphic video.

Sen. Ted Cruz, R-Texas, who was among those leading the effort to challenge the Electoral College tally, said, “The president’s rhetoric is at times overheated, but this is not a referendum on whether you agree with everything the president says or tweets.”

Sen. Josh Hawley, R-Mo., another leader of the election challenge, said, “Nothing new here for me at the end of the day.”

As the country numbs to the Trump era’s shattering of civic norms, the prosecutors sought to remind senators and the nation how extraordinary it was to have a sitting U.S. president working to discredit the election.

As far back as spring and summer, Trump was spreading false claims about the election and refusing to commit to the peaceful transfer of power once it was over, they said.

Trump’s second impeachment trial is expected to diverge from the lengthy, complicated affair of a year ago. In that case, Trump was charged with having privately pressured Ukraine to dig up dirt on Biden, then a Democratic rival for the presidency. The second trial could be over in half the time.