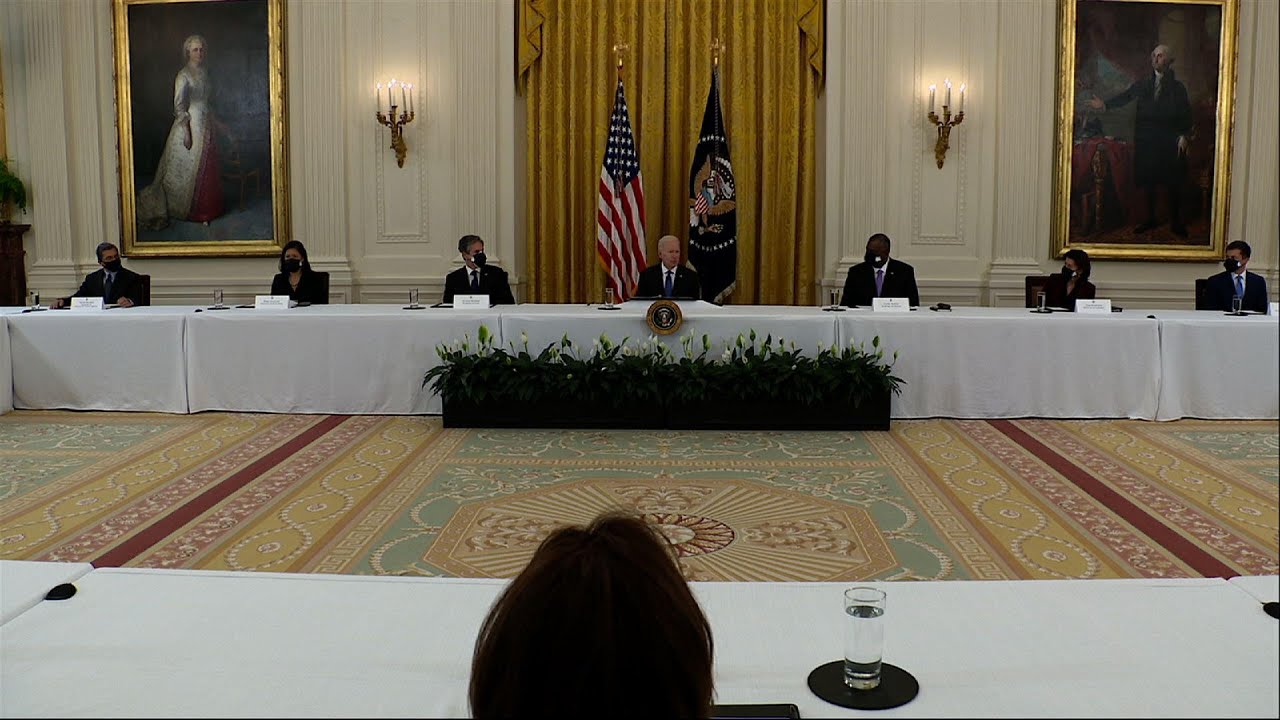 Washington — President Joe Biden used his first Cabinet meeting to promote his new infrastructure plan, but the gathering had a very different look and tone from those held by his predecessor.

To begin with, the full Cabinet met Thursday in the spacious East Room, rather than the comparatively cramped West Wing room that bears its name, to allow for social distancing. All attendees, including the president, donned masks. And the afternoon meeting did not include the over-the-top tributes to the chief executive that came to define Cabinet meetings held by President Donald Trump.

The timing of the first meeting was deliberate: a week after the full Cabinet was confirmed and a day after Biden released his infrastructure plan, which will likely dominate Washington through the summer and shape next year’s midterm elections.

The White House allowed press to witness just the opening three minutes of the meeting, where the president tapped five Cabinet secretaries “to take special responsibility to explain the plan to the American public.” He directed Transportation's Pete Buttigieg, Energy's Jennifer Granholm, Housing and Urban Development's Marcia Fudge, Labor's Marty Walsh and Commerce's Gina Raimondo to be visible to Americans and lead outreach on Capitol Hill.

Biden also directed the entire Cabinet to examine their agency spending to ensure it follows his “Buy American” commitment.

With the sales blitz for the infrastructure plan just beginning, the focus of the meeting will be on how the package can help across government, as well on continuing to emphasize the benefits of the $1.9 trillion COVID-19 relief bill that Biden signed into law this month, said White House deputy press secretary Andrew Bates.

Cabinet meetings in the modern era are less about setting administration policy than ensuring that all the government agencies are on the same page, say former officials. The sessions also are an opportunity for the president to make his priorities and values clear. Policy debates are generally reserved for smaller, subject-specific gatherings of Cabinet officials and senior advisers, such as the National Security Council and the Domestic Policy Council.

“As the federal government has become increasingly complex over the years, the role of the Cabinet has evolved as well," said Chris Lu, President Barack Obama’s first-term Cabinet secretary. “In addition to serious policy discussions, Cabinet meetings are an opportunity for the president to lay out broad directions for how his team should operate."

All 16 permanent members of the Cabinet — the vice president and heads of the executive departments, including Treasury Secretary Janet Yellen, Secretary of State Antony Blinken and Pentagon chief Lloyd Austin — are attending in person. So were other Cabinet-ranked officials, including White House chief of staff Ron Klain and Director of National Intelligence Avril Haines.

Shalanda Young, acting budget head, was participating because Neera Tanden, Biden’s first choice for that job, withdrew her nomination amid Senate opposition. Biden is also awaiting the confirmation of Eric Lander to be the director of the Office of Science and Technology Policy, a post that the president has elevated to Cabinet rank.

In all, 25 people were attending, the White House said. In normal times, scheduling an in-person Cabinet meeting would require weeks, if not months, of planning to block off time in the travel schedules of the various principals. But most have remained in Washington due to the pandemic.

Trump’s Cabinet meetings became known for their high level of presidential adoration, with “Dear Leader”-esque praise coming from attendees. His first full Cabinet meeting, held in June 2017, began with Vice President Mike Pence declaring that it was “the greatest privilege of my life to serve as the vice president to the president who is keeping his word to the American people.”