Washington — Detroit City Clerk Janice Winfrey told a U.S. House panel on Wednesday that she and her election workers have received threats of violence as a result of false claims of a stolen election by former President Donald Trump, causing her to lose staff and to live in fear. 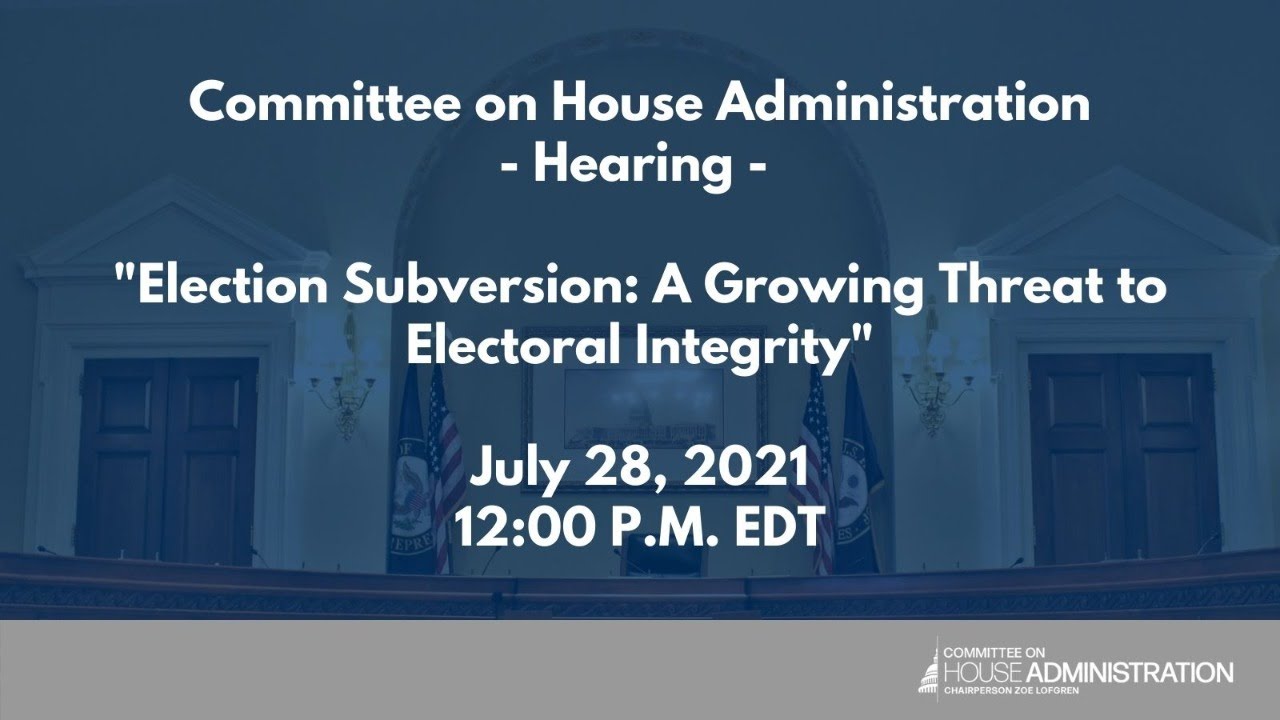 Winfrey, in testimony before the House Administration Committee, compared her experience to what happened to members of Congress when pro-Trump rioters breached the U.S. Capitol on Jan. 6.

"Except they're coming to our homes, and they're making us very uncomfortable," Winfrey said. "Some of my colleagues have been shot at, simply because of what we do. All of us have been threatened — and because we're trying to represent our community," she added.

"If it weren't for the work of local election officials, none of you would be here in this room. We just want to uphold democracy. We just want to ensure that every one votes. It is unfair. It's unfair that we're attacked for doing our job. I feel afraid."

The threats against Detroit elections workers led to five of Winfrey's senior staff going on leave, and one who retired, she said. They didn’t come back until after the election was canvassed and certified, she added.

"The overall climate at the Department of Elections is one of fear, almost," Winfrey said, noting that several staffers were hospitalized with COVID-19 after the election. "People are wanting to retire."

The threats against Winfrey included a White man, whom she estimated at 6-foot-3 and 250 pounds, who approached her while she was walking in her neighborhood and accusing her of "cheating," telling her, "You are going to pay dearly for your actions in this election!"

Winfrey, who is Black, described the man's manner as threatening, and that he was coming closer to her, telling her he had tracked her down at her home after waiting for her at her office.

"My only recourse was to yell, 'I have COVID-19 and I will spit on you!'" Winfrey said in her testimony.

She added that a neighbor driving by asked if she was OK and helped to block the man's approach so she could get home safely.

Later that evening, Winfrey said she received a Facebook message stating the man was going to blow up her block and that she was a chicken head and ugly in person, prompting her to call the Detroit Police Department to report the "horrific" encounter, she said.

Trump lost Michigan to Democrat Joe Biden by 154,000 votes or 3 percentage points — an outcome bolstered by a f court rulings, bipartisan boards of canvassers who certified the win, as well as multiple audits.

But Detroit, which is a Democratic stronghold, has been at the center of unproven claims of fraud since the November election, despite results showing that Trump actually performed better in the majority-Black city in 2020 than he did in 2016.

Trump has recently continued to attack Detroit's election, saying last month that the only reason the city is "not yet under investigation is because the Republicans in the state Senate are a bunch of weak RINOs that are afraid to act."

Trump and his allies have been pushing for a new audit of Michigan's election. "Detroit is one of the most corrupt places on Earth, and the information is coming out, and fast," the former president said in a statement in June.

But the Republican-led state Senate Oversight Committee released a report in May, saying lawmakers had found no evidence of fraud in the 2020 election after investigating the vote for more than seven months.

Winfrey, who is facing four challengers in an August primary election, serves in a nonpartisan capacity as the elections administrator for the city, which is Michigan's largest.

She is part of a panel of witnesses that testified Wednesday before the House panel at a hearing focused on increased attacks on election officials in the last year, including attempts to strip them of their authority in states like Georgia.

California U.S. Rep. Zoe Lofgren, who chairs the panel, said election workers have been "unfairly" targeted because of election results that some politicians "did not like."

She said some election officials had young children or elderly parents also receiving threats, and that threats to officials of color were "particularly graphic," often including racist or sexist insults.

"The unfounded theory that the 2020 general election was swayed by widespread voter fraud — this disinformation campaign has villainized election officials, many of whom believe that these claims are the reason that election officials are under attack," Lofgren said.

She noted the nonpartisan Brennan Center for Justice found in a spring survey of election officials that roughly 1 in 3 felt unsafe due to their job, and 1 in 6 listed threats to their lives as a job-related concern.

They reported the number and severity of these threats had dramatically increased in comparison to past election cycles, and more than half of the election workers interviewed said social media made their jobs more dangerous.

"In order for democracy to function, we cannot accept this situation," said the Brennan Center's Gowri Ramachandran in Wednesday testimony. "We cannot expect first-rate, honest and trustworthy professionals to keep signing up for this kind of treatment year after year."

Another witness, Adrian Fontes, was Maricopa County recorder in Arizona during the 2020 election. He said a SWAT team was brought into the area where workers were counting ballots in order to dissuade the possibility of violence by armed protesters outside.

"It's just not a normal situation when fully armed and fully armored SWAT teams have to be present because that's what security officials recommend when folks are outside armed with AR-15-style and AK-47 style weapons, essentially, threatening to storm the building," Fontes said.

"That's a kind of a stressful situation that no civil servant, no election administrator should ever have to deal with. But they came through."

Whitmer said in her testimony Wednesday that threats were made to her, to her staff and to Detroit poll workers by phone, email and in person, including when absentee ballots were counted on Election Day.

She noted "disruptive" conduct by Republican poll challengers who had to be removed by security due to their behavior at the TCF Center, which she had rented to accommodate the expansion of absentee ballot counting operations.

"Some wore intimidating masks over their entire face, others banged on the walls and windows shouting 'Stop the vote!'" she said, adding that others ignored social distancing rules or refused to place masks over their noses when asked.

"It appeared that this disruption attempted to undermine the tabulation of absentee ballots," Winfrey said.

Winfrey in her testimony said last fall she and her husband were diagnosed with COVID-19 and in quarantine when she got a call from Michigan Secretary of State Jocelyn Benson, who informed her that canvassers would refuse to certify Detroit’s elections unless she testified before them.

It was unclear which canvassing board Winfrey was referring to — Wayne County’s or the State Board of Canvassers, as she mentioned both.

But Winfrey left her husband’s side at the hospital and went to her office wearing “multiple” masks and “placing my staff in harm’s way, to prevent the state board from disenfranchising hundreds of Detroit voters," she said.

Winfrey testified virtually before the Board of State Canvassers on Nov. 23, and at the time referenced a medical issue and someone being in the hospital.

After her testimony to the canvassers, Winfrey said the harassment continued, including “insulting” text messages to her personal cellphone, insults on social media and through her email inbox.

In February, she heard from Detroit Police who informed her about a death threat from a white supremacist, notifying her that additional patrols would monitor her home for a couple of weeks. Winfrey said she and her husband decided to instead leave town.

Winfrey had made a complaint to Detroit police about an email concerning the election that was sent to an Ann Arbor radio station, Shaw said. She told Detroit police, which investigated and found the possible suspect may have lived in Lapeer County, so the matter was forwarded to State Police.

Detectives from the MSP Lapeer Post interviewed the man and investigated further, and the probe recently wrapped up, Shaw said.

“There appears to be a mental health aspect to this with the suspect,” he said.

Shaw said there wasn’t a racial element to the email. “This was strictly about the election,” he said. “Race wasn’t mentioned.”

“We were aware of an online threat, and we briefed her on what we found, and we also sent a special detail to the home to patrol her neighborhood in response,” Harper said.

Winfrey urged lawmakers to deem it unlawful to harass, intimidate and threaten local election officials while they are performing their duties as election administrators.

That's in part the aim of proposed legislation touted by Lofgren that would also restrict the removal of local election officials in elections for federal office without cause.

"We need laws to protect us for simply doing our jobs," Winfrey told Pennsylvania Rep. Mary Gay Scanlon, a Democrat.

"I'm nonpartisan in my job and, as such, me and my staff, we shouldn't be threatened. We shouldn't do the job fearfully. We want a clear, clean, fair elections."

Winfrey told the panel that she expects that she'll get "some kind of repercussion" from appearing before the committee, "but I decided to do it, because I believe in the right to vote."

Lofgren said Wednesday the proposed legislation would also protect voters from intimidation when voting in person by restricting who may challenge voters in federal elections and by prohibiting poll observers from getting within eight feet of voters.

Republican lawmakers at the hearing didn’t directly address threats made to election workers in the first part of the hearing.

Instead, they blasted “disinformation” from the left about alleged voter suppression in Republican states across the country where lawmakers are pushing changes to election laws.

“The states that are passing these laws are doing so in part to clean up temporary pandemic rules that were made during COVID, but are not needed outside a pandemic,” Davis said. “Rules like 24-hour drive-thru voting and others.”

Rep. Teresa Leger Fernández, a New Mexico Democrat, apologized to the witnesses Wednesday that her GOP colleagues at the hearing didn't address the threats against election administrators.

"I am incredibly disappointed that our Republican colleagues have not addressed the violence and the threats itself," she said.