Snyder, Schauer at odds over economy

Republican Rick Snyder is hyping jobs — "more and better jobs" — as he campaigns for another term as governor, contending that Michigan's resurgence is well underway and will continue under his guidance.

Snyder, Schauer at odds over economy 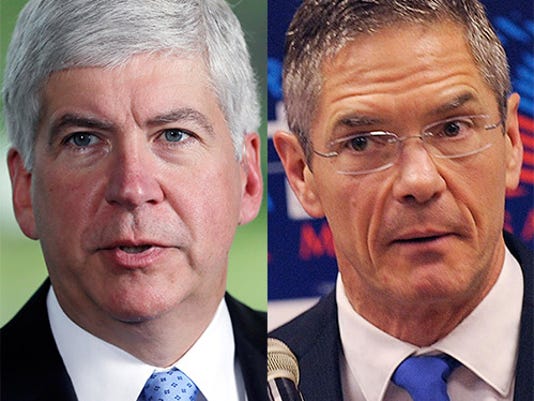 Lansing – — Republican Rick Snyder is hyping jobs — "more and better jobs" — as he campaigns for another term as governor, contending that Michigan's resurgence is well underway and will continue under his guidance.

Democrat Mark Schauer says the economic recovery is slowing and, due to Snyder's tax policies, not working for many.

The economy, and voters' feelings about it, is sure to be a factor on Election Day Nov 4. Snyder hopes it's the determining factor.

Since he took office in 2011, Michigan employers have added 278,000 jobs. The steady climb began toward the end of former Democratic Gov. Jennifer Granholm's tenure and has continued under Snyder.

Unemployment, which peaked at 14.2 percent in 2009 and was 11.3 percent when Snyder was sworn in, is now 7.2 percent. It was fourth-highest in the U.S. then and is now eighth-worst.

Of course, it's debatable to what extent a governor can claim credit or assign blame for job creation, given how little he or she can shape global and national factors that heavily influence a state's economy. Michigan shed a staggering 400,000 jobs alone during the 2008-09 financial collapse.

Snyder says he's made a difference, however, citing pro-growth moves such as replacing the state's main business tax with a simpler one levied on 91,000 fewer businesses and voters' recent approval of the elimination of taxes that manufacturers and small businesses pay on equipment. One of his go-to figures of late is in a report from MiQuest, a group that helps in-state entrepreneurs, saying Michigan's entrepreneurial climate ranks sixth nationally, a reversal from its ranking of 41st in 2008.

"Government's goal is not to create jobs. Government's role is to create the environment for success and let free enterprise work," Snyder said at one of his re-election campaign's town hall events.

Schauer is pointing out that job creation has decelerated.

"The nerd governor wants to be graded on a curve. We're one of the few states in the country that hasn't recovered all the jobs lost during the Great Recession," Schauer said. "It's not working."

He cites a Michigan Economic Development Corp. report concluding that the fastest-growing occupation from 2012 to 2013 was food service workers. The quickest-growing industry was fast food restaurants.

If elected, he says he'd base his jobs plan on three moves: reverse education funding cuts made in 2011, reinstate more generous tax breaks for people with pension income and give tax incentives to companies that create jobs in Michigan. Snyder eliminated many business tax credits, which he calls the "heroin drip" of government, in favor of direct cash grants to firms that expand and add jobs in the state.

Both men are linking tax policies to their economic growth plans.

Snyder this past week picked up an award for the second straight year from the conservative-leaning Tax Foundation for advancing "simpler, smarter" tax policy.

"We were putting an extra tax on our businesses," he said of the Michigan Business Tax that was scrapped in favor of a 6 percent Corporate Income Tax. "We (had) built a tax system that said the people that create jobs, because that's where jobs come from, should pay more than we pay on our salaries and wages. That's not how you create jobs."

When Democrats brought former President Bill Clinton to Flint in recent days to excite the base, he decried GOP "trickle-down" economics and said the state's jobless rate is still too high. He also credited America for taking just six years to regain all the lost jobs from the crash instead of what could have been a decade like during previous economic collapses.

In Michigan, though, which was hit harder before and during the national recession, economists project slightly more than half of the 857,000 jobs lost from 2000 to 2009 will be replaced by the end of 2016.

Republican House Speaker Jase Bolger, who first ran for state representative in 2008, said when he knocked on doors then he saw "fear" and "sadness" in people. Now, he said, they're excited by an economic recovery that goes beyond the auto industry.

"People are investing again in Michigan," Bolger said. "We've made Michigan a better place to provide a job … and a better place for better careers."