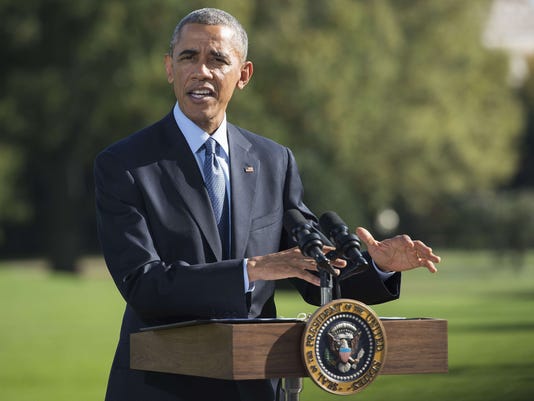 President Barack Obama will speak in Detroit on Saturday night to an expected crowd of 5,000 people at Wayne State University, marking his first visit to the Motor City in three years.

Obama will speak at a ticketed event at the Matthaei Complex at 7 p.m., according to an email sent to Wayne State University officials and reviewed by The Detroit News. Doors are to open at 5 p.m. Saturday.

Tickets will be available on a first-come, first-serve basis beginning 5 p.m. Wednesday at Michigan Democratic Party coordinated offices in Metro Detroit. They are located at:

Obama has visited Detroit twice since taking office. He last visited on Labor Day 2011.The White House advance team was at Wayne State on Tuesday, according to the email. The event organizers will be charged for the use of the space for the event.

Obama was in Ann Arbor in April with Peters touting his push to hike the minimum wage to $10.10 an hour — stopping at an Ann Arbor deli, Zingerman's, and speaking at the University of Michigan.

In February, Obama visited Michigan State University to sign the farm bill and had lunch with Detroit Mayor Mike Duggan.

Before his February trip, Obama had last visited Michigan in December 2012 — soon after his re-election to visit a Detroit Diesel factory in Redford Township. Then Detroit mayor Dave Bing in 2012 said Obama should visit Detroit more often.

After Detroit's record-setting bankruptcy filing in July 2013, the White House sent a flood of cabinet officials to the state — and Vice President Joe Biden has been a frequent guest to the city.