The presidential candidate said he would slap Ford with a 35 percent tax for “every car, bumper and part” made in Mexico

Thousands stand outside in the rain waiting to get seats before Donald Trump speaks.. Dale G Young, The Detroit News
Fullscreen A fan holds a sign for the candidate. Dale G. Young, The Detroit News
Fullscreen

A heckler tries to drown out Trump. No fewer than 10 protesters were kicked out, garnering boos from the crowd. Dale G. Young, The Detroit News
Fullscreen

Trump waves near the end of his program. Dale G. Young, The Detroit News
Fullscreen

Donald Trump mixes with the crowd after his address. Dale G. Young, The Detroit News
Fullscreen 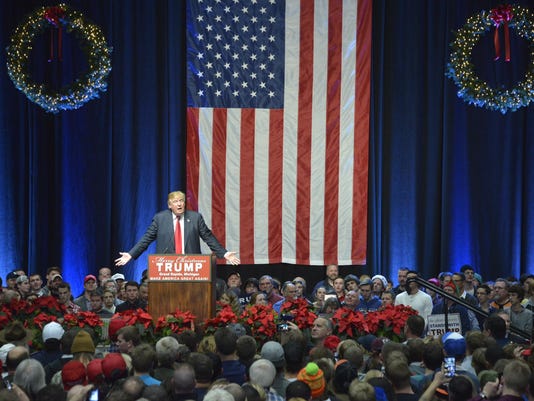 The Republican presidential front-runner continued his months-long campaign trail criticism of the Dearborn automaker during a speech Monday night before a raucous crowd of 8,100 supporters who packed a suburban Grand Rapids basketball arena.

The bombastic billionaire said he would slap Ford with a punitive 35 percent tax for “every car, bumper and part” produced at an expanded plant in Mexico.

Trump said he would hike the tariff to 40 percent if Ford CEO Mark Fields initially balks at his demand that the company bring production back to the United States.

“I’m a free trader, but we can’t be stupid traders,” Trump told supporters who stood outside in the rain for hours to see him speak at the DeltaPlex Arena in Walker.

In April, Ford said it would add 3,800 jobs in Mexico as part of a $2.5 billion investment — on top of the 11,300 Ford already employs in Mexico, where the company has had operations for about 90 years. The investment will include a new engine plant and new transmission plant allowing for exports of engines to the United States and elsewhere. Fields has said Trump has misstated facts about its production in Mexico.

Trump’s plan to slap Ford with a special tax would likely violate the North American Free Trade Agreement and require an act of Congress to impose. But the plan drew applause from Cody Higley, 30, of Paw Paw.

“We need somebody that’s going to actually challenge companies to do business in America,” Higley said after the speech. “We want American cars to be built in America by Americans.”

Trump spoke for an hour in a freewheeling address that meandered from Ford to the country’s trade imbalance with China, while taking several jabs at GOP presidential rival Jeb Bush and Democratic front-runner Hillary Clinton.

Trump pushed back at Clinton’s new claim that the Islamic State terrorist group is recruiting jihadist fighters with video of Trump.

At one point, Trump commented on Clinton being temporarily missing after a commercial break during Saturday’s Democratic presidential candidate debate.

“I know where she went. It’s disgusting,” Trump told the crowd. “I don’t want to talk about it.”

No fewer than 10 protesters were kicked out, garnering boos from the crowd.

During one of the outbursts, Trump said they were “staged.”

“You really are a loser,” Trump told one protester. “Get him out.”

Trump also touted his latest polling numbers against Republican rivals such as Bush and South Carolina Sen. Lindsey Graham, who dropped out of the race earlier Monday.

“His family’s so ashamed,” Trump said.

Steve and Linda Berta of Farmington Hills drove more than two hours to see Trump and were among several thousands of supporters who stood in line outside for hours on a rainy afternoon in west Michigan ahead of his 7:30 p.m. rally.

“We are the silent majority,” Linda Berta said of Republicans supporting Trump’s campaign for the GOP presidential nomination next year.

“I think the (Republican) establishment is all talk. Once they get into Washington, D.C., they go and do something outside of what their promises are.”

During his speech, Trump said he’s building a “movement” that will propel him to the White House.

Outside of the arena, long lines snaked through the parking lot of the events center, resembling the huge crowds then-Sen. Barack Obama attracted in 2008 during his history-making campaign for the White House. Dozens donned the “Make America Great Again” hats the Trump campaign has used to market the billionaire’s unorthodox candidacy.

“It looks like there’s a lot of support from all age groups,” said state Rep. Jon Bumstead, R-Newaygo, as he stood near the back of the line.

Bumstead is one of the few Republican elected officials to publicly support Trump in a crowded GOP presidential field of mostly politicians.

Trump, who has never held elected office, has mostly dominated the Republican primary polls for six months. He has been riding a wave of media publicity from his controversial campaign rhetoric and plans for blocking the flow of Mexican and Muslim immigrants into the country.

Bumstead said he thinks Trump will attract independents, Democrats and young voters in Michigan’s March 8 GOP primary who would otherwise stay home and not vote.

“I think he’s got a really good chance (of winning the GOP nomination),” Bumstead said. “People are looking for a real change.”

Seth Winderholler, 30, of Grosse Pointe said he likes that Trump is wealthy enough to fund his own campaign without the type of big donations other candidates rely on.

“We don’t have to worry about him selling out ... to lobbyists and special interests,” Winderholler said after the speech. “When he’s president, he won’t have to answer to the people who funded him.”

Heath Corey, a paramedic from Stockbridge, considers himself an independent and said Trump is winning his vote because he “grasps” the views of “common people.”

“I just like it that he tells it like it is and he’s not politically correct,” said Corey, 44. “I’m like a lot of people — I’m fed up with the whole damn political system.”

As Trump supporters packed into the DeltaPlex, fewer than 100 Democrats protested out by the street, chanting “Hey, hey, ho, ho, Donald Trump has got to go.”

Many of them wore T-shirts expressing their support for Vermont Sen. Bernie Sanders, the Democratic socialist who is attracting huge crowds in his presidential primary battle against Clinton.

Andrew Geer, 20, of Grand Rapids held up a handmade sign that read: “Hate is not part of making America great.”

Geer said Trump is spreading hatred by railing against people from Mexico living in the country illegally, and proposing a temporary ban on Muslims entering the country on suspicion that they may have ties to radical Islam.

“This hate that he’s roiling up in his base is not the way to make people respect us. It will only make them hate us more,” said Geer, a Sanders supporter.

Robert Smith, a UAW member who works at a Grand Rapids-area auto supplier, compared Trump’s candidacy with the bombastic Southfield attorney Geoffrey Fieger, whose 1998 Democratic campaign for governor flamed out in the general election against incumbent Republican Gov. John Engler.

“I think Trump will be a national version of Geoffrey Fieger,” said Smith, a Democrat. “He’s got a lot of low-information voters who are impressed because he doesn’t have a verbal filter.”

But in a general election, Smith said, “the establishment voters will just go away.”

“I don’t think he can survive a general election,” Smith said.