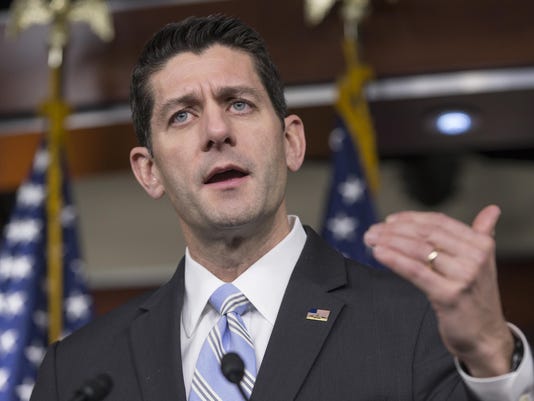 U.S. House Speaker Paul Ryan had a good run in his first few weeks on the job, clearing out several high- profile bills in a year-end rush.

The good times may not last.

Ryan is already lowering expectations of major legislative achievements in 2016, saying he wants to focus on spelling out a conservative agenda. Far-right Republicans say they want more — and that they’ll push Ryan for votes on their top priorities, such as making significant tax changes, reining in entitlement programs and enacting a new health-care law.

That tension — between Ryan’s push to set out broad principles and the House Freedom Caucus’s impatience to force higher-profile confrontations — could intensify this week as House Republicans go to Baltimore to sort out their legislative agenda.

If the three dozen members of the conservative Freedom Caucus don’t like the outcome, they say they are prepared to push him just as hard as they pushed Ryan’s predecessor, John Boehner, who eventually quit the job.

The Republican policy retreat was scheduled to last through Friday. Republican senators was also on hand through Thursday.

An agenda for the retreat distributed to members included among its closed-door events a session on “Framing the Debate Beyond Floor Votes.” That discussion will feature Ryan and Senate Majority Leader Mitch McConnell of Kentucky.

Another private session for members, titled “Jobs and Economic Growth,” was led by Lawrence Kudlow of CNBC, who is considering running against Democratic Senator Richard Blumenthal of Connecticut. The participants in that session include Bob Griefeld,CEO of Nasdaq Inc.

Ahead of the retreat, conservatives were trying to set a new, firmer tone.

“I think that there was a lot of patience in the last six weeks because people realized that it wasn’t a table he set that we were eating from,” Salmon said, referring to Ryan.

Salmon said the Wisconsin Republican was given what amounts to a pass by conservatives in his first weeks after being elected speaker on Oct. 29 because he was handling Boehner’s legislative leftovers. That included passage of a $1.1 trillion omnibus spending bill in December with mostly Democratic votes.

“That’s gone, starting this year,” said Salmon of such patience with Ryan.

Another Freedom Caucus member, Raul Labrador of Idaho, raised eyebrows last week when he declared “the honeymoon is over” for Ryan as the House speaker.

On Tuesday, Labrador added in an interview that he wants to see actual legislation put up for House votes this year, ticking off such aims as entitlement reform and a tax overhaul.

But Ryan,the 2012 Republican vice presidential nominee, so far has stopped short of specific promises. On the Senate side, McConnell already has been playing down the prospect of tax changes in 2016.

Ryan told reporters Tuesday that the House will pass a budget plan for the next fiscal year. But he hedged on whether there will be votes on such things as entitlement revisions or deeper spending cuts.

The policy retreat this week in Baltimore is where Ryan said he hopes to launch “the beginnings of the conversation of assembling an agenda to take to the country, and the launching of a process under which we put that agenda together.”

The best way for House Republicans to lay out their agenda for the American public is to pass legislation, he said, regardless of whether it will become law.

Ryan, however, may be trying to position Republicans to compete more effectively in the 2016 general election by developing a “bold pro-growth agenda” without having to actually take too many votes on it.

The Freedom Caucus, led by ChairmanJim Jordan of Ohio, put out a statement Tuesday before President Barack Obama’s State of the Union remarks and the Baltimore retreat that said, “This year Congress must advance bold conservative ideas to help families who have seen job loss and stagnant income during the Obama presidency.”

What gives the three dozen Freedom Caucus members leverage is that Republicans control the chamber with 246 seats to 188 for Democrats — meaning their votes can be crucial to passage on issues dividing the parties.

Because some of the thorniest debates, such as raising the debt limit, have been pushed off until after the election, the differences that could emerge this year may have more to do with tactics and expectations, some lawmakers and congressional experts say.

“The Freedom Caucus and much of the Republican base are angry at Republican leaders for not delivering on their promises,” said Thomas Mann, a congressional expert at the Brookings Institution in Washington. “Ryan is trying to lower expectations by a brash articulation of a very conservative agenda and a priority to elect a Republican president.”

But Mann and New York-based political pollster John Zogby both predict that Ryan will eventually have to depend on Democrats to pass some legislation because of divisions within his own party.

“Sadly for him, I think the Ryan speakership was damned from the outset. I am still surprised he accepted,” said Zogby. “The position is not a bully pulpit nor a national agenda setter. The president does that constitutionally and historically.”

For now, Ryan’s approach has largely focused on trying to open up the House decision-making process.

His promise is aimed at responding to complaints from members such as Representative John Fleming of Louisiana, a Freedom Caucus member, who said Boehner had made similar promises to decentralize the decision-making.

“But ultimately what he did is he would put the staff together and we’d be up against a hard deadline and we would have our arms twisted to vote for it,” Fleming said.

On the other hand, giving the Freedom Caucus more influence could further expose the deep splits with moderate Republicans on certain areas, such as defense policy and spending, immigration, the Export-Import Bank and trade.

If Ryan truly opens the process to the House Freedom Caucus, “they will likely force votes that neither he, nor establishment Republicans, want to see on the floor,” said Joshua Huder, a senior fellow at the Government Affairs Institute at Georgetown University in Washington.

Huder also noted that in a presidential election year — with the prospect that Hillary Clinton could top the Democratic presidential ticket — some House Republicans representing more moderate, swing districts could be at risk if the House pursues an aggressive conservative agenda, particularly on social issues.

“Ryan will need to find the sweet spot between giving conservatives a voice and protecting his at-risk members,” said Huder.

Representative Charlie Dent of Pennsylvania, a co-chairman of a group of House moderates, said Freedom Caucus members aren’t the only ones who “want to take on some bold policy issues.”

“What is extraordinarily unhelpful is that a member would issue a threat to Speaker Ryan, literally on the first day back of Congress” this year,” Dentsaid of Labrador’s assertion that the honeymoon is over. “It’s very unfair.”

Salmon and other Freedom Caucus members said the “first big fight” could come with the budget plan early in the year.

Dave Brat of Virginia,another Freedom Caucus member, said, “The proof in the pudding for the speakership will be the budget and appropriations process.”

On appropriations bills, Fleming suggested that if there is no agreement on a new government spending plan after fiscal 2016 funding runs out Sept. 30, the House should seek to maintain its leverage.

“I would suggest that we don’t take up Senate bills unless the Senate takes up our appropriations bills,” Fleming said.

And if House Republicans get pushed up against another potential government shutdown drama, Fleming said, they should keep passing two-week extensions of current funding levels “until the other side gives in and decides to work with us.”