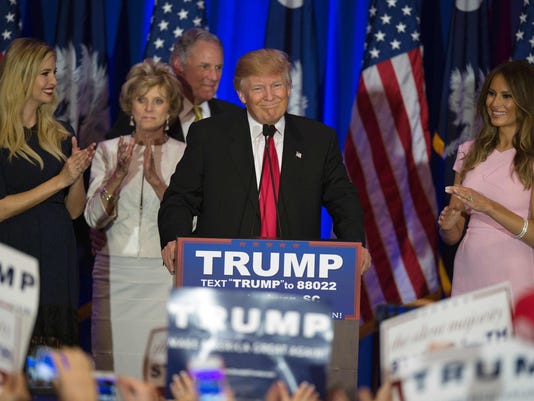 Ted Cruz says that his third place finish in South Carolina is effectively a tie for second place with Marco Rubio.

Cruz said Sunday on ABC’s “This Week” that “there is now only one strong conservative remaining in this race who can win.”

Note to anyone who wants John Kasich to exit the race for the GOP presidential nomination: Not gonna do it. Not anytime soon, at least.

The Ohio governor tells CBS’ “Face the Nation” that for him, the goal is gathering delegates in such Republican contests as Massachusetts, Vermont, Virginia, Mississippi, Michigan and Illinois. He says, “I don’t have to win in these places, I just have to hang in there and continue to gather momentum.”

The Florida senator put it this way: “If you’re running to be president, you can’t just tell people you’re going to make America great again.”

The former secretary of state on CNN’s “State of the Union” pledged to defend and do everything she can to support Israel, but adds, that “the Palestinians deserve to have a state of their own. That’s why I support a two-state solution.”

Bernie Sanders says that the economy is “a lot better” than it was seven years ago “thanks to President Obama.”

Sanders made an unannounced stop at a luncheon following services at a Baptist church in West Columbia, South Carolina. He says he would work to fix a “broken criminal justice system” and give black Americans more economic opportunities.