Democrats, Republicans and independents all put a high priority on protecting Social Security and reducing unemployment 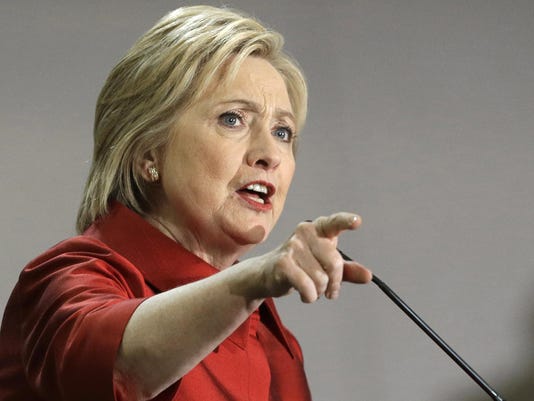 Democratic presidential candidate Hillary Clinton. Democrats attach far more importance than do Republicans to narrowing the gap between rich and poor, reducing poverty and increasing wages to keep up with the cost of living.(Photo: Pat Sullivan / AP)

Washington —Finally, something that polarized Americans can agree on.

Ask people what economic issues will be important for the next president, and Democrats, Republicans and independents alike all put a high priority on protecting Social Security and reducing unemployment.

Beyond that, though, their lists of top economic concerns for the next president are more fractured, according to a poll conducted by The Associated Press-NORC Center for Public Affairs Research.

Democrats attach far more importance than do Republicans to narrowing the gap between rich and poor, reducing poverty and increasing wages to keep up with the cost of living.

So while Americans of all stripes consistently put the economy at or near the top of their lists of most important issues, they may have very different concerns in mind when they do so.

Philadelphian James Leake, living on disability at age 50, worries about another economic “blowout” and zeroes in on income inequality as a key problem.

“The corporations are taking more and more and more, and I’m like, ‘Don’t you … realize the bubble is soon going to burst?’ “ said Leake, a Democrat.

“It’s a perceived problem,” said Vasquez, who calls himself an “anti-establishment” Republican. “Even people that would call themselves poor, they don’t understand how rich they are. Americans are spoiled brats. People don’t appreciate what they have.”

From such opposite perspectives, though, Leake and Vasquez both say protecting Social Security is an extremely important item for the next president’s to-do list.

“The way people do things in Washington, they may take it away,” said Leake.

“By the time I retire, it’s going to be a broken promise,” said 44-year-old Vasquez. “There’s not enough workers paying into the system.”

Overall, the AP-NORC poll found 85 percent of Americans think protecting the future of Social Security is extremely or very important for the next president and 81 percent said the same for reducing unemployment.

There’s a valid reason for their concerns about Social Security: The retirement and disability program has enough money to pay full benefits until 2034, after which it will only have enough money to pay about 75 percent of benefits. Over the next 75 years, Social Security is projected to pay out $159 trillion more in benefits than it will collect in taxes, according to agency data.

The employment outlook is considerably brighter right now: The economy created 151,000 jobs in January, pushing the unemployment rate down to an eight-year low of 4.9 percent.

Looking at the poll results by party, Republicans were most likely to single out reducing the federal deficit as an item that is extremely important or very important for the next president, with 86 percent highlighting that concern. The red ink outlook: President Barack Obama’s latest budget proposal sees the deficit rising from $438 billion last year to more than $500 billion for the 2017 budget year that starts Oct. 1. Deficits over the coming decade would total $6 trillion.

Among Democrats, meanwhile, protecting Social Security was a top concern for 89 percent, reducing poverty was highlighted by 86 percent and reducing unemployment was singled out by 84 percent.

Even where there’s common ground among voters on top issues, there’s no unanimity among Americans about who’s best equipped to tackle those problems.

Count Randy Werner, a retired factory worker in Manitowoc, Wisconsin, among those worried about Social Security’s future. Among his concerns: He thinks too many people are drawing disability benefits from the system, some of them “more than capable of working.” A Democrat who says he’s moving toward being an independent, Werner likes some of what he hears from Republican businessman Donald Trump but isn’t sure who he’ll vote for in the presidential race.

Heather Kinnaman, a 50-year-old disabled veteran from Albuquerque, is equally worried about Social Security but leaning toward supporting Hillary Clinton.

Kinnaman is not confident any of the candidates can do well with the economy, but sees Clinton as “the lesser of the evils to me.”

Vasquez, for his part, is debating among “four good ones” to tackle the country’s economic problems and everything else, saying he’s looking at Ted Cruz, Marco Rubio, Ben Carson and John Kasich.

Trump, he said, “is the worst thing that could ever happen in this country, but still would be better than the Democrats.”

The AP-NORC Poll of 1,008 adults was conducted Jan. 14-17 using a sample drawn from NORC’s probability-based AmeriSpeak panel, which is designed to be representative of the U.S. population. The margin of sampling error for all respondents is plus or minus 3.6 percentage points.