Dump Trump? Some millennials aren’t so sure

In a poll, 25 percent of people under 30 said they would vote for Trump if he faced off against Clinton in the fall

Dump Trump? Some millennials aren’t so sure 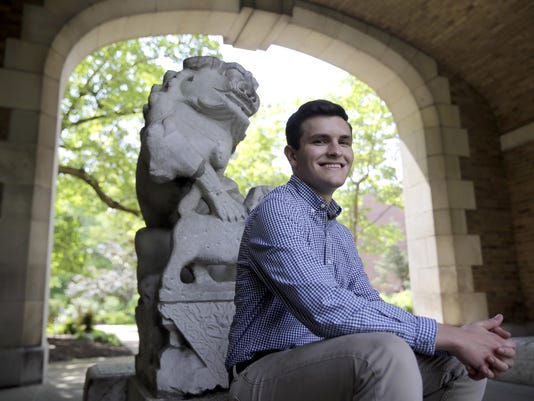 In this May 11, 2016, photo, Jeremy Wiggins poses for a photo in Columbia, Mo. Wiggins, a 20-year-old business administration major at the University of Missouri-Columbia, is a supporter of Donald Trump and has been elected to be a delegate from Missouri to the Republican National Convention where he plans to cast his delegate vote for Trump.(Photo: Jeff Roberson / AP)

Costa Mesa, Calif. — Brendan De Regla drove three hours and waited in line for half a day to see Donald Trump speak at a rally in Southern California.

Dozens of college-aged protesters shouted on the other side of a police line, but De Regla, 22, stood unwaveringly in support of Trump.

“I just fell in love with him immediately,” he said, sporting a “Make America Great Again” T-shirt. “Since day one, I’ve loved him. But I knew it would take some time for people to figure out what he was about and what he was going to do and it’s finally happening.”

While most polls show Bernie Sanders is the overwhelming favorite of millennials — voters between the ages of 18 and 35 —some young voters are taking a serious look at Trump as the primary season rolls on. In a Harvard Institute of Politics poll out this spring, 25 percent of people under 30 said they would vote for Trump if he faced off against Hillary Clinton in the fall.

Sanders still has the clear advantage among millennials, and the same Harvard poll shows 80 percent of young people with a very favorable opinion of Sanders would vote for Clinton if he drops out.

But young voters are united in their anger and disillusionment, having come of age during the Great Recession. Trump has tapped into that subset of those voters in the same way as Sanders, despite their radically different policy proposals, said Morley Winograd, a senior fellow at the University of Southern California who has authored books on millennials.

Millennials are also deeply suspicious of corporate power and bureaucracy, in part because many watched their own families suffer during the economic meltdown. That leads to a greater distrust of Clinton, who is seen as part of the establishment; 53 percent of those under 30 say they dislike Clinton, according to the Harvard IOP poll.

“Right now, their disapproval of her is kind of hard to watch in some ways,” said Kei Kawashima-Ginsberg, director of the Center for Information and Research on Civic Learning and Engagement at Tufts University, which has studied millennial voting patterns in this election. What seems to be missing is party loyalty among young people who are voting, Kawashima-Ginsberg said. “It seems to be a mistake to assume that because there’s a Democratic Party nominee that they will vote for that person.”

Morton, who is black, voted for Barack Obama in 2008, but then he lost his house to foreclosure during the recession and was unemployed for a year.

Now a self-employed small business owner, Morton said he began to follow politics more closely and studied up on what caused the economic collapse and world politics.

He briefly considered Sanders for his honesty, but ultimately settled on Trump because Sanders is “too hippyish.”

“I’m going to vote Republican this election but that doesn’t mean I’m Republican. … This is a choice we’re making for the next four years.”

Even some of the youngest millennials who didn’t suffer the brunt of the recession see promise in Trump.

Jeremy Wiggins, 20, is a junior at the University of Missouri and a delegate to the Republican National Convention.

He plans to vote for Trump at the convention although he, too, respects Sanders for his message, he said.

“You have an honesty (with) Sanders or Trump, an honesty with your candidate,” he said. “But for why you’d choose Trump over Sanders, for somebody my age you’re going to be in the job market very soon, starting your first job, getting health insurance and … we want the jobs to be there.”

Trump is still a long way from cementing the support of these voters, who “grew up with this cultural norm of not bullying, being inclusive and with diversity being seen as a strength, not a weakness,” said Thad Kousser, a professor of political science at the University of California, San Diego.

“Donald Trump has to talk in a different way if he’s going to get these voters. He can’t just be that bully who says we need these jobs back,” he said. “He needs a message for people who are still looking for good jobs and who are more comfortable with the new face of America.”

Ian Smith, a 24-year-old who works with adolescents in drug and mental health rehab, showed up at the same Trump rally in suburban Southern California.

He grew up with a Democratic activist mother but was torn between Trump and Sanders before he was turned off on Trump by what he called the hatefulness of the crowd.

Now, he prefers Sanders, but says Trump might come back into consideration in a potential race with Clinton, who he thinks is an opportunist and a liar.

“To be perfectly honest, I’d flip a coin,” Smith said of a choice between Trump and Clinton. “I don’t like either, but I’m going to vote, no matter what.”