The Detroit News politics reporter and editorial page editor look at our interactive county map of Michigan and talk about what led to Donald Trump's win. 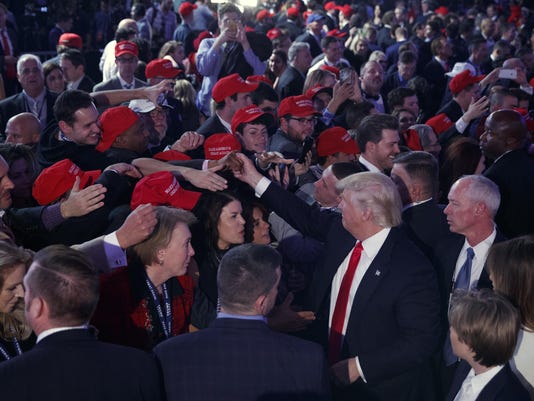 President-elect Donald Trump’s narrow victory in Michigan came after he waged a yearlong public battle with one of the state’s iconic automakers to energize white working-class voters.

Trump’s criticism of Ford Motor Co.’s expansion of auto production in Mexico was a distinct change in messaging from four years ago, when Republican Mitt Romney spoke in philosophical opposition to political intervention in the economy.

Trump wins most counties in Michigan - An interactive map

“With Mitt, they saw kind of a professor and what they saw with Trump was a fighter,” said former U.S. Rep. Pete Hoekstra, a Holland Republican who co-chaired Trump’s Michigan campaign.

Hoekstra credits Trump’s confrontation with Ford and other manufacturers as a way to put his thumb on the pulse of working-class voters in blue-collar and rural areas of the Michigan, where he says residents feel “alienated” from the country’s corporate and political ruling class.

The New York real estate mogul won Michigan by 13,107 votes, according to unofficial results from the Secretary of State’s office.

Trump’s upset over Democrat Hillary Clinton was aided by higher vote totals in 76 of Michigan’s 83 counties.

“Donald Trump over-performed in rural areas across the state as well as blue-collar areas such as Macomb County and has fundamentally changed the map so Republicans can win statewide with a different coalition,” GOP strategist John Yob said Wednesday.

Trump won over white voters without a college education 61 percent to 31 percent for Clinton, according to exit polling conducted for The Detroit News and national television networks.

Trump supporters were attracted to the New York billionaire’s brash, anti-establishment rhetoric. He has vowed to “drain the swamp” in Washington, D.C., and institute new “ethics reforms” amid widespread dissatisfaction with perceived political elites.

Many Michigan voters did not appear to be dissuaded by his lewd comments toward women and bragging about using celebrity influence to grope women in 2005 audio that surfaced before the election concluded. Nor did many recoil from his comments about building a wall between Mexico and America or temporarily banning Muslims from entering the country to create better measures to screen terrorists.

“I’m so sick of the last eight years, I really am,” said Penny Nelson, 73, a Trump supporter who attended a Mike Pence rally in Traverse City the day before the election. “He’s blunt and honest. And it’s refreshing.”

Twelve counties that voted for Obama in 2012 instead went for Trump Tuesday night. They included Bay, Eaton, Macomb, Monroe and Saginaw counties.

Participation was down in some traditional Democratic strongholds, such as Genesee County, where total votes fell 6 percent. The county that includes Flint went Democratic 54-44 percent, but the margin was smaller than victories for Democrat Obama in 2012 (64 percent) and 2008 (66 percent).

Trump also benefited from lower turnout in Wayne County and particularly Detroit, where Clinton received 47,840 fewer votes than Obama did in 2012.

Third-party candidates also may have played a role in Trump’s victory. Some voters bucked the Republican and Democratic parties and cast protest votes for Libertarian Gary Johnson or Green Party candidate Jill Stein.

About 57 percent of Michigan voters said they had an unfavorable view of Clinton, while 59 percent viewed Trump unfavorably, according to the exit poll.

Johnson won 172,711 votes or 3.6 percent, the largest percentage of votes captured by a third-party candidate since Ross Perot won 9 percent in 1996. Johnson’s total broke a 154,040-vote threshold needed for the Libertarian Party of Michigan to participate in the August 2018 primary.

The nearly 4.8 million votes cast Tuesday in the presidential contest were up by 53,957 votes cast or 1.1 percent percent compared with four years ago. Tuesday’s election set a new record for the second highest turnout in state history behind the 5 million votes cast in Obama’s 2008 election as the nation’s first African-American president.

Bill Gelineau, chairman of the Libertarian Party of Michigan, fought the notion that Libertarians spoiled the election for Clinton. He said the Green Party’s Stein is more closely aligned with the political philosophy of progressive Democrats.

Many Johnson supporters may not have voted at all if the former New Mexico governor hadn’t been on the ballot, Gelineau said.

“We’re responsible for a third force and if we don’t take that opportunity seriously shame on us,” Gelineau said.