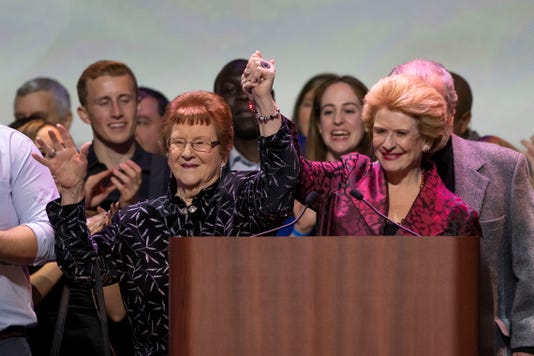 U.S. Sen. Debbie Stabenow defeated Republican challenger John James by her smallest margin since getting elected in 2000, winning a fourth term in a contest in which President Donald Trump backed James.

The Associated Press projected Stabenow would win after 11:20 p.m. James, the 37-year-old Farmington Hills businessman, conceded the race to Stabenow after 11 p.m. in a speech at the headquarters of his family businesses.

Stabenow, 68, of Lansing had 52 percent to 46 percent for James with 99 percent of precincts reporting. The Iraq helicopter pilot veteran waged an energetic campaign in a contest between those who favored an experienced stalwart versus a new face with new ideas and energy.

“I want to thank the people of Michigan for your continued trust and support," the senator said in a statement. "It is my honor to suit up everyday to fight for our families and our state. I am very proud we ran a positive campaign that focused on Michigan.”

The race has received a drumbeat of attention from Trump, who endorsed James, called the African-American Republican a "rising star" in the GOP, and enlisted Vice President Mike Pence and other surrogates to raise money and campaign for him.

While Trump himself did not make the trip to Michigan, he sent White House counselor Kellyanne Conway to rally for James Sunday night in Taylor, his son Donald Trump Jr. and Pence who made stops a week ago in Oakland County and Grand Rapids. Eric Trump and Lara Trump both campaigned for James last month, and Trump lawyer Rudy Giuliani joined him Saturday in Holland.

James said Stabenow is a “nice" but “hyperpartisan” senator who discounted her constituents and didn’t pay attention to the decay and problems plaguing cities around the state. Stabenow scoffed at the attack and shored up her support in the waning months of the campaign with visits in churches where James had campaigned in prior months.

In his concession speech, James indicated he might keep involved in politics.

"This is why we're not done because too many families out there don't have the ability to live the life we do," he said, adding that a "passion for service doesn't end with a poll or end with a vote."

Despite the Republican onslaught of appearances, Stabenow led in every public opinion poll, usually by double digits. She was initially considered potentially vulnerable since Trump won Michigan in 2016, but the president had a 57 percent unfavorable rating in an Oct. 25-27 Detroit News-WDIV poll of 600 likely state voters.

Republican candidate John James thanks his supporters and concedes the race for a U.S. Senate seat. The Detroit News

She also benefited from visits by former President Barack Obama and former Vice President Joe Biden in the past week and a half.

"I voted for Debbie Stabenow, and I think she does a great job," said Cynthia Mearnic, 58, of Sterling Heights, who has met the longtime senator and toured her office years ago.

When asked about James, she said, "I'm sure he's a great guy but she does an awesome job. You don't ever hear about her in a scandal. She works hard. She's always there. She stands up for Michigan."

But Bill Washington, 59, of Farmington Hills, said James is a new, energetic face who would be good for Washington, D.C.

"If you really want change, you are going to have to have fresh blood," said Washington, who knows James personally and lives near the candidate. "For this young man to come out and associate himself with Donald Trump ... I don't think it's a travesty. He's associating himself with change. I'll tell you what: It won't be any change with Stabenow still in there."

After he voted Tuesday morning with his wife and two children ages five and three in tow, James said, "I'm feeling great" about his chances.

"By the grace of God and our grass-roots army, I think we're going to be able to carry the day," he said. "There's been a lot of hard work, a lot of sacrifice that's gone in."

Stabenow, who had already voted absentee but linked up with gubernatorial Democrat Gretchen Whitmer at her polling place in East Lansing, said she was confident.

With wife Elizabeth at his side, Republican U.S. Senate candidate John James thanks his supporters, concedes the race and says he will enjoy having more time with his family. He spoke at his election night party at James Group International in Detroit. (Photo: Robin Buckson, The Detroit News)

"I feel good," Stabenow said Tuesday morning. "I think Gretchen would agree that the only poll that counts is today. It's people voting today, and that's what will make all the difference. I've been very grateful to receive support from throughout this state, and not only work hard on elections, but work hard every day."

Stabenow said "who we are" is  also on the ballot. She and other Democrats framed the election as a referendum on Trump, who has said he wanted to come back to Michigan but ended up visiting states he won in 2016 where other Republican candidates stood a better chance at victory.

U.S. Senator Debbie Stabenow makes her way on stage after winning her race against John James. She joined Democratic Party candidates at the Sound Board theater in the MotorCity Casino in Detroit Tuesday night. (Photo: Daniel Mears, The Detroit News)

The James campaign has been hammering Stabenow as having done little in Washington and not delivering enough for Michigan while she has painted James as someone who talks but without specifics about how he would work for the state's needs.

But Stabenow has carved out a bipartisan reputation on farm and agricultural issues, where she has won support among a traditional Republican constituency. This year and in 2012, she received the endorsement of the Michigan Farm Bureau.

Myles Deleeuw, 24, made a point to vote mostly for women Tuesday, especially when it came to Democratic U.S. Sen. Debbie Stabenow, whom Deleeuw considers experienced and dynamic.

“Stabenow is my girl,” said Deleeuw, a Lansing resident.

The incumbent has had a massive fundraising edge until the past month, when help from Trump and Pence have helped energize the political newcomer's fundraising. James raised more money than Stabenow in the first 17 days of October, $2 million to $471,000.

Still, Stabenow maintained a cash advantage with $2.8 million on hand to James' $1.8 million going into the final weeks of the campaign.