Dearborn congressman is scheduled to get the nation's highest civilian honor 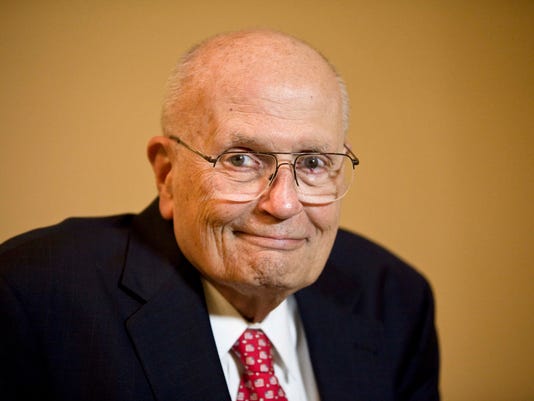 Rep. John Dingle said of winning the Presidential Medal of Freedom: “I have to admit, I’m flattered beyond any telling.”(Photo: Brendan Smialowski / Getty Images)

Washington — Rep. John Dingell, the longest-serving member of Congress in U.S. history, is scheduled to receive the nation's highest civilian honor Monday in what promises to be the capstone of a legendary career filled with awards.

President Barack Obama will award Dingell, the 88-year-old Dearborn Democrat, the Presidential Medal of Freedom along with luminaries such as Michigan-born singer-songwriter Stevie Wonder, newsman and author Tom Brokaw and actress Meryl Streep during a White House ceremony Monday afternoon. It is the highest honor an American civilian can receive.

"Let's be honest about it. It's the biggest, most important, the most celebrated of all — and, I have to admit, I'm flattered beyond any telling and grateful beyond anything to President Obama for his kindness to me," Dingell said Friday in a Detroit News interview.

The Presidential Medal of Freedom recognizes "an especially meritorious contribution to the security or national interests of the United States, world peace, cultural or other significant public or private endeavors."

Honorees get a medal with a white star and red background, worn around the neck on a blue ribbon.

The award comes on the same day the retiring Dingell — who has about six weeks left in office — has to vacate the office in the Rayburn House Office Building that he has used since 1991.

Dingell emphasized that his almost 59 years in Congress haven't been about trying to rack up honors, although it is nearly impossible to keep track of the awards he has received — many this year with retiring U.S. Sen. Carl Levin, D-Detroit.

Last week, Dingell and Levin received from the LBJ Foundation the LBJ Liberty & Justice for All Award for epitomizing former President Lyndon Johnson's "legacy and honor(ing) his dream for the American people."

Levin, Michigan's longest-serving senator, who is retiring after 36 years in Congress, said in a Detroit News interview that Dingell is the ideal recipient of the Medal of Freedom.

"I can't think of anyone serving in the Congress now or perhaps who has ever served who deserves it more than he does," Levin said. Dingell's legacy is "he took some very courageous stands at many points in his life — courageous in terms of civil rights, courageous in terms of the environment and that he by doing so helped to move this country forward."

Dingell is typically humble about the award. ""My service has liberally been sprinkled with good luck," he said. "Wherever I've had troubles, there was somebody who would come along and rescue me."

A few weeks before the Nov. 10 announcement, Obama called Dingell to tell him he would get the award. He told only his wife and a couple of staff members.

The White House announcement called Dingell "a lifelong public servant" and "one of the most influential legislators in history." The White House noted Dingell has "fought for landmark pieces of legislation over the past six decades, from civil rights legislation in the 1960s, to legislation protecting our environment in the 1970s, to his persistent, determined fight for health care throughout his career, from Medicare to the Affordable Care Act."

His wife, Debbie, was elected to succeed him. She drew No. 40 out of 57 for the lottery among new House members for office space. She will be in Cannon 116 — an interior-facing office — while Rep. Pete Visclosky, D-Indiana, who has been in Congress for nearly 30 years, will move into John Dingell's Rayburn office.

Dingell and the other departing members get a temporary desk for the transition and he will get to hold on to his small Capitol hideaway office until he steps down.

He said Debbie Dingell will do a great job in Congress representing the people he served for more than a half-century. "She's going to be the best. She's had 35 years of training as my wife," Dingell said, noting she worked as an aide to former U.S. Sen. Robert P. Griffin, R-Michigan, and for General Motors.

The award ceremony will come about two months after Dingell spent four days in Detroit's Henry Ford Hospital with an infection.

"I've felt better and I've felt worse," he said, "and I don't have any complaints."

His office has sent most of his papers to the University of Michigan's Bentley Historical Library, but is still looking for homes for some larger items, such as an 8-foot-long marlin and a boar's head. Both may be donated to a Capitol Hill watering hole, the Tune Inn.

But the focus Monday will be on his reception of the presidential medal, which members of Congress from both parties in Michigan hailed. Rep. Sander Levin, D-Royal Oak, said Dingell's honor is for "standing up with iron in your spine for what you believe in."

Rep. Bill Huizenga, R-Zeeland, called Dingell's service "admirable" and noted that Dingell was "very gracious" in welcoming him when he entered Congress in 2011.

Rep. Candice Miller, R-Harrison Township, said Dingell has always been honest, even when opposing a bill or amendment she supported. "He is just such a fantastic gentleman," she said.

What: President Barack Obama will give the Presidential Medal of Freedom to 19 individuals, three of them posthumously to civil rights workers James Chaney, Andrew Goodman and Michael Schwerner, who were murdered in 1964 trying to help blacks register to vote.