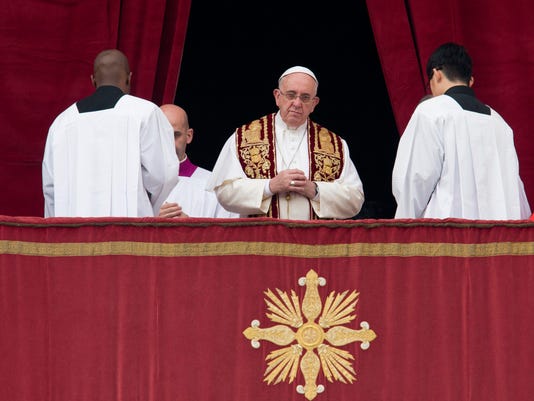 Pope Francis delivers his "Urbi et Orbi" (to the city and to the world) blessing Thursday from St. Peter's Basilica at the Vatican.(Photo: Alessandra Tarantino / AP)

Vatican City — A somber Pope Francis steeped his Christmas message to the world Thursday in sadness for those with little cause for joy — abused children, refugees, hostages and others suffering from violence in the Middle East, Africa, Ukraine and elsewhere.

Anguish for children who suffer maltreatment or violence, including in the recent terrorist attack on a Pakistani military school, tempered the pontiff’s traditional Christmas Day speech, which he delivered from the central balcony of St. Peter’s Basilica.

A crowd, estimated by the Vatican to number more than 80,000 Romans, tourists and pilgrims, filled St. Peter’s Square for the “Urbi et Orbi” message (Latin for “to the city and to the world”).

“Truly there are so many tears this Christmas,” said Francis, looking solemn and smiling little, in contrast to his often jocular demeanor when addressing crowds.

He lamented that many children are “made objects of trade and trafficking” or forced to become soldiers, as well as those never born because of abortion.

“I think also of those infants massacred in bomb attacks, also those where the Son of God was born,” said Francis, referring to the Middle East.

Francis decried the persecution of ancient Christian communities in Iraq and Syria, along with those from other ethnic and religious groups.

“May Christmas bring them hope,” he said.

The pope also thanked those courageously helping people infected with Ebola in Africa.

Francis also had harsh words for some in affluent nations. He prayed for an end to the hardened hearts “of so many men and women immersed in worldliness and indifference, the globalization of indifference.”