The Pope issued his strongest defense of church teaching against artificial contraception. 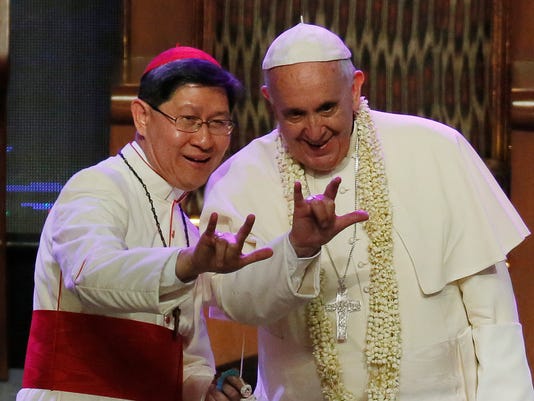 Filipino Cardinal Luis Antonio Tagle, left, shows Pope Francis how to give the popular hand sign for "I love you" at the Mall of Asia arena in Manila, Philippines, on Friday.(Photo: Wally Santana / AP)

Manila, Philippines — Pope Francis issued his strongest defense yet of church teaching opposing artificial contraception on Friday, using a rally in Asia’s largest Catholic nation to urge families to be “sanctuaries of respect for life.”

Francis also denounced the corruption that has plagued the Philippines for decades and urged officials to instead work to end its “scandalous” poverty and social inequalities during his first full day in Manila, where he received a rock star’s welcome at every turn.

Francis has largely shied away from emphasizing church teaching on hot-button issues, saying the that he wants to focus on making the church a place of welcome, not rules. But his comments were clearly a nod to the local church, which recently lost a significant fight when President Benigno Aquino III pushed through a reproductive health law that allows the government to provide artificial birth control to the poor.

“Be sanctuaries of respect for life, proclaiming the sacredness of every human life from conception to natural death,” Francis exhorted the crowd. “What a gift this would be to society if every Christian family lived fully its noble vocation.”

He then deviated from his prepared remarks to praise Pope Paul VI for having “courageously” resisted calls for an opening in church teaching on sexuality in the 1960s.

Francis noted Paul knew some would find it difficult.