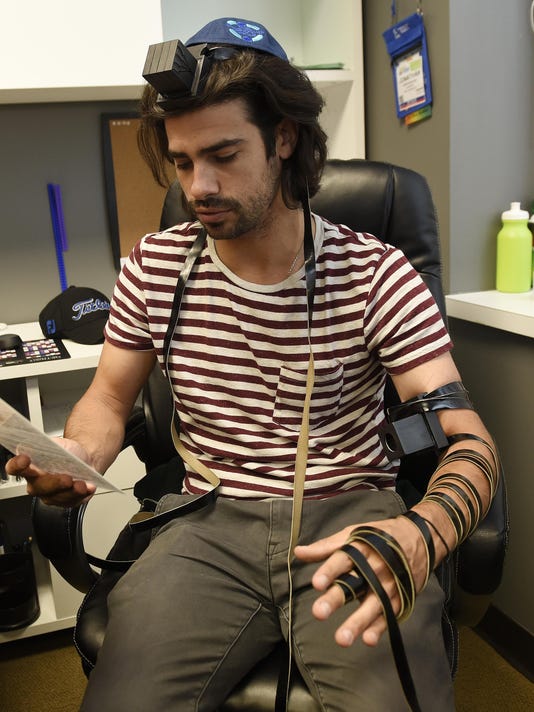 Jonathan Klar, owner of Toyology in Royal Oak, dons a skull cap and tefillin as he reads scripture from the torah before a prayer session with Chabad-Lubavitch students.(Photo: Clarence Tabb Jr. / The Detroit News)Buy Photo

In the past few years, Berel Shmotkin has become adept at tying tefillin on other Jews.

The Torah, the sacred Jewish text, calls for male followers ages 13 and up to bind the pair of black leather boxes containing Hebrew parchment scrolls onto their head and upper arm every weekday.

Some have rarely, or never, followed the ancient observance that a seminal religious leader in the Chabad-Lubavitch movement worked to revive worldwide half a century ago. And to honor the 50th anniversary of that initiative’s start, Shmotkin and other future rabbis who attend an affiliated Oak Park school have been working to perform the ritual with 1,500 people across Metro Detroit in under four months.

“The more we use our tefillin, the nicer it becomes — in a spiritual way,” the 15-year-old from Connecticut said between seeking enthusiasts in West Bloomfield Township on a recent evening.

To ace the “Detroit Tefillin Challenge 1,500” and reach as many people as possible by the Friday deadline, the Lubavitch Yeshiva-International School for Chabad Leadership attendees have devoted breaks from studies and long hours to trek to stores, offices, and other sites.

Hundreds nationwide are commemorating the milestone of Rabbi Menachem M. Schneerson’s global call issued around the Six-Day War in the Middle East in 1967 for Jews to quickly don tefillin and say a prayer — an act considered a mitzvah, or good deed, Chabad-Lubavitch officials said. 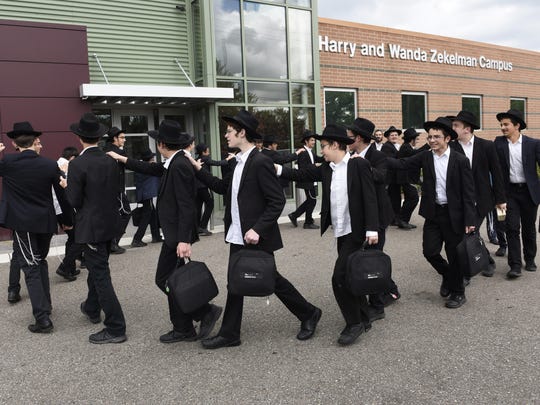 Lubavitch Yeshiva-International School for Chabad Leadership students perform a Hasidic dance at the Oak Park campus to finalize the “Detroit Tefillin Challenge 1,500.” The rabbis-in-training spent weeks aiming to perform the Hebrew ritual with 1,500 people across the region. (Photo: Photos by Clarence Tabb Jr. / The Detroit News)

Tefillin outreach has long been a staple at the world-known Oak Park school, which works to shape the next generation of Jewish leadership. Since the participants were tasked with finding their own ways to connect to residents, the effort helps build skills helpful in their future roles heading congregations, said Rabbi Mendel Stein, the campus’ development director.

“They’ve got to use their brains and they’ve got to think outside of the box a little bit and communicate with people who are mostly older to try to convince them that the Jewish ritual they are advocating for is really good,” he said.

Motty Slonim, 15, another student who hails from New York state, estimates he reached about 200 people, but one encounter stands out. While in Birmingham, the teen met a man who was initially reluctant to try the wrapping but after some walking, talking and convincing agreed.

Soon after, “he started to cry a little bit,” Slonim recalled. “He told me that he never put on the tefillin before. … He really felt like his soul connected back to its source and he felt really good about doing it.”

Shmotkin found a similar experience with another visitor who reasoned he lacked the time for the ritual. The youth’s response: “God gave you life. At least you can give him 30 seconds or one minute or two minutes.”

When the act was done, the man reported feeling changed and refreshed — which the youth considered a positive sign.

“We learned that every Jew has a certain spark, which when he does an actual practical commandment that fulfills a command from God, fires up,” he said. “So doing the mitzvah with other people in addition to the effect it has on their spiritual soul, it also helps them physically.”