St. Paul on the Lake latest stop in ongoing display of bone from beloved Detroit friar, who is approaching sainthood 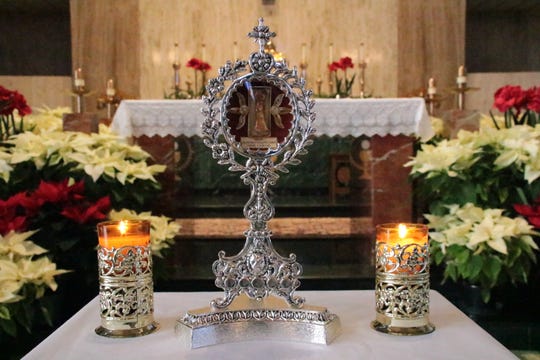 A relic of Blessed Solanus Casey, the first metacarpal of his right hand, has been hosted at parishes across Metro Detroit since 2017. (Photo: Carl Salmonson)

When Solanus Casey welcomed visitors at Detroit’s St. Bonaventure Monastery nearly a century ago, the poor, sick and dispirited turned to him for the kindness and generosity he radiated.

Now, decades after the beloved Capuchin friar's death and following his advancement toward sainthood, devotees will gather at St. Paul on the Lake Catholic Church in Grosse Pointe Farms for a similar reason.

Starting Thursday, parishioners are presenting a thumb bone from the iconic doorman: a relic associated with a saint and is believed to allow the devout to connect to Jesus Christ.

“It’s so appropriate that it’s a part of his hand,” said Deacon Bill Jamieson, a pastoral associate at St. Paul on the Lake. “He used his hands to care for countless numbers of people. … He did the work of Jesus. He brought the presence of Jesus to others.”

The site is hosting a public veneration, or honoring, of the relic at select times daily through March 5.

It is the latest stop in an ongoing effort to display the first metacarpal from Casey’s right hand since the Capuchins gave the piece to the Archdiocese of Detroit and Archbishop Allen Vigneron after the friar was beatified in 2017.

The elevation to “Blessed” in the Roman Catholic Church moved the Capuchin Soup Kitchen founder closer to becoming a saint. The beatification also granted a feast day, July 30, which is observed in his home diocese, at specific sites connected to him or religious houses associated with the Capuchin order.

Casey’s relic has visited 16 parishes since an inaugural visit in 2017 at National Shrine of the Little Flower Basilica in Royal Oak, the archdiocese said. It is slated to visit 23 more through November for six-day stints.

Each participating parish can invite the community for veneration and prayer services.

At St. Paul on the Lake, a prayer service starts on Thursday. Visitors can stand or kneel near the relic, make the Sign of the Cross and kiss or touch the case housing it. Surrounding them will be banners showing Casey’s likeness and describing his life.

“It’ll be beautiful to reflect as a parish on someone so holy,” said Beth Allison, the youth ministry director who coordinated the event. “It’s a time of great grace, and we’re just so blessed to have this amazing opportunity.”’

“Masses of healing” are scheduled for March 2-3, during which the seriously ill can be anointed, said Monsignor Patrick Halfpenny, the longtime pastor.

“Because Solanus Casey has such a reputation of God working through him, to heal people in a variety of circumstances, it was the perfect time to offer the sacrament,” he said. “There are so many families that have stories of a relative or friend who went to see Blessed Solanus with a difficulty … and God just used him.”

Since Casey’s death in 1957, many have credited him with logic-defying recoveries. His beatification came after Vatican authorities officially confirmed that a Panama woman’s unexpected healing from a serious skin condition was a miracle attributed to his intercession.  Another verified miracle secures sainthood.

Some parishioners who often carry Casey’s picture or prayer cards wonder if that final measure could unfold in Metro Detroit.

“We pray that he will be recognized as a saint,” said Carmen Dusina, a longtime member who teaches a catechism class in St. Paul’s after-school religious education program. “He is definitely already a saint.”

The veneration also evokes other spiritual revelations. It ends the day before the start of Lent, the holy season during which worshipers recall Christ’s sacrifice and strive to imitate his life.

Some view the focus on Casey’s life as the perfect preview.

“That is just going to enrich our Lenten pilgrimage and the celebration of Easter,” Halfpenny said. “It’s at the heart of our faith.”

Casey’s relic has proven popular at other parishes, as well, including Church of the Divine Child in Dearborn last month.

“There was a constant flow” of guests, said Jodi Ann Micallef, an evangelization coordinator. “We had all age groups there.” 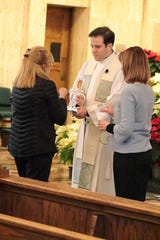 From youths seeking solace to older residents who can recite Casey’s sayings, the relic reminded them of an “ordinary man who struggled and became holy,” said the Rev. James Bilot, the pastor at Divine Child. “There was a curiosity and the anticipation to know that there was this man who lived in Detroit who had the ability to perform miracles. It creates that excitement that holiness is attainable.”