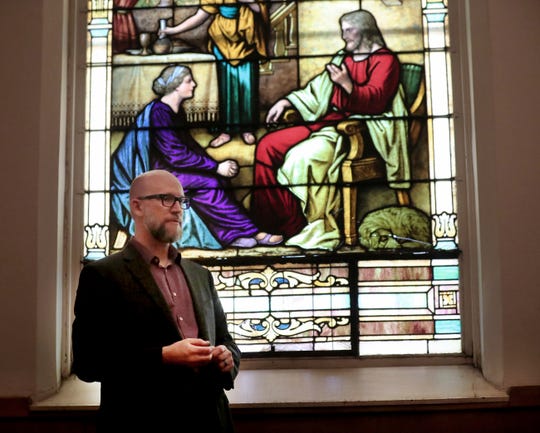 Rev. Dan Collison inside First Covenant Church where he is the lead pastor in Minneapolis. (Photo: David Joles, Star Tribune)

Minneapolis – Leaders of the Evangelical Covenant Church voted to defrock a Minneapolis pastor and expel his church for permitting gay marriage.

The Rev. Dan Collison had his credentials removed by a 77% vote at the Evangelical Covenant Church’s annual meeting in Omaha, Nebraska, on Friday night.

Collison, who became a pastor at First Covenant in downtown Minneapolis in 2009, told the Star Tribune he was “not surprised” but “saddened” after he was voted out.

“I feel grounded in the path we have chosen. I feel grateful for the pastors and churches who stood up for us. I feel compassion to those caught in the middle,” Collison said.

The ECC says First Covenant is free to keep operating as a church and can keep its church building. First Covenant says Collison will continue serving as lead pastor.

A First Covenant staff member officiated at an off-site wedding of two women from the church worship band in 2014. It also put out a “love all” statement that said it welcomes members of the LGBTQ community to participate in the church, including serving in leadership roles. It also says it offers pastoral care, including weddings, “to all in our congregation without regard for ability, race, sex, gender identity or sexual orientation.”

Leaders had recommended that Collison, Armfield and First Covenant be forced out because they violated Evangelical Covenant Church policies on human sexuality, specifically “celibacy in singleness and faithfulness in heterosexual marriage.”

“The ECC is mindful of the complexity, the sensitivity and the pain that matters of human sexuality can bring,” said Michelle Sanchez, an ECC executive minister. “We talk about the desire for both freedom and responsibility as a denomination. Those two things were coming into tension in this case.”

First Covenant Church was founded by Swedish immigrants in 1874. For decades it was one of ECC’s largest churches nationally, until membership declines began in the 1970s. Today, the denomination has about 875 churches with 280,000 members nationally. It is headquartered in Chicago.

“I hope this historic church someday changes its mind and then returns to our family,” ECC President John Wenrich said in a statement.

Armfield, an ECC pastor for 47 years, also was suspended in 2017. He had served an ECC church in Red Wing, Minnesota, in the 1970s before moving to Michigan. He officiated his son Matthew Armfield’s wedding in 2017.

“It is so unbelievably upsetting to see my father, Dan, and my fellow members of First Covenant experience the hate, deceit and actions that go against the teachings of love and inclusion that Jesus Christ preached,” said Matthew Armfield, who attends First Covenant.