Roman Catholic Diocese of Buffalo filed for bankruptcy protection Friday, another major step in its effort to recover from a clergy misconduct scandal

Buffalo, N.Y. – The embattled Roman Catholic Diocese of Buffalo filed for bankruptcy protection Friday, taking another major step in its effort to recover from a clergy misconduct scandal that‘s been the basis for hundreds of lawsuits, Vatican intervention and the resignation of its bishop.

With its filing in U.S. Bankruptcy Court, the western New York diocese became the second in the state to file for Chapter 11 reorganization, and one of more than 20 dioceses to seek bankruptcy protection nationwide. Most recently, the Roman Catholic Diocese of Harrisburg, Pennsylvania, filed Feb. 19. 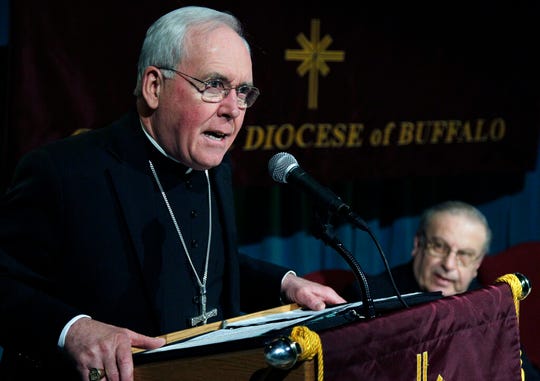 In this May 29, 2012 file photo, Bishop Richard Malone speaks during a news conference in Buffalo, N.Y. The embattled Roman Catholic Diocese of Buffalo filed for bankruptcy protection Friday, Feb. 28 2020, taking another major step in its effort to recover from a clergy misconduct scandal that's been the basis for hundreds of lawsuits, Vatican intervention and the resignation of Malone on Dec. 4, 2019. (Photo: David Duprey, AP)

The Buffalo diocese has faced particular turmoil in recent months, culminating in the Dec. 4 resignation of Bishop Richard Malone following a Vatican-mandated investigation. Malone had faced intense pressure from members of his staff, clergy and the public to step down amid criticism that he withheld the names of dozens of credibly accused priests and mishandled reports of misconduct against others.

“We have no more urgent work than to bring about justice and healing for those harmed by the scourge of sexual abuse,” Albany Bishop Edward Scharfenberger said in a statement. “The intense emotional, mental and spiritual pain inflicted on these innocent victim survivors is a heavy burden they are forced to carry throughout their lives.”

Scharfenberger, who is temporarily overseeing the Buffalo diocese, said the decision will enable the highest possible number of victims to be compensated while allowing the work of the diocese to continue. The diocese includes 163 parishes and missions across eight western New York counties.

It already has paid out about $18 million – including $1.5 million from the sale of the bishop’s mansion – to more than 100 victims under an independent compensation program established in 2018. It faces more than 240 new lawsuits filed since August, when the New York’s Child Victims Act suspended the statute of limitations to give childhood victims one year to pursue even decades-old allegations of abuse.

The bankruptcy filing does not include individual parishes or Catholic elementary and high schools, which are separately incorporated, Scharfenberger said.

Attorneys Steve Boyd and Jeff Anderson, who represent some alleged sexual misconduct victims, criticized the filing as self-serving. Critics of the process say the proceedings can limit victims’ access to sensitive records with the potential to expose additional wrongdoing by priests or senior church officials.

“The Diocese of Buffalo is using bankruptcy to continue to conceal the truth about predator priests in this diocese,” Anderson said in a statement.

The Roman Catholic Diocese of Rochester was the first of the state’s eight dioceses to seek bankruptcy protection when it filed in September. Several others have said bankruptcy was a consideration.

More than a dozen attorneys general around the country have confirmed investigations or reviews of clergy abuse in the wake of a shocking Pennsylvania grand jury report last year. The report asserted that about 300 priests had abused at least 1,000 children in the state over seven decades.