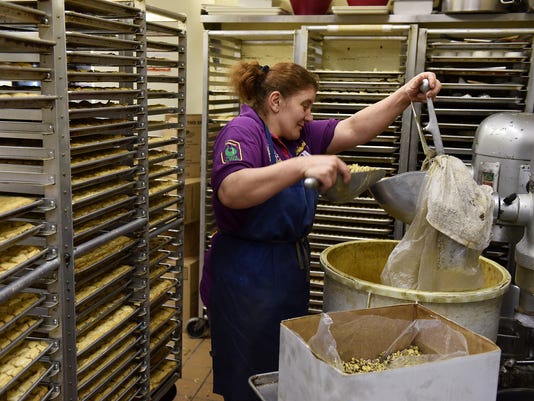 Fourth in a series on the many ethnic food businesses on Dequindre between 11 Mile and 17 Mile.

The move to a new country and culture is not easy.

Life in America was lonely at first for Kamilia Dous, who came here from Egypt in 1985 when she married Malek Maatouk, a Lebanese immigrant who opened Mid-East Pastry Delight bakery, across Dequindre at 15 Mile from the American Polish Cultural Center.

All of her family was in Egypt. “In our country, we are used to live together — the mom and dad, the kids, the aunts, the uncles, the cousins ,” she said. “And when I came here I was by myself. It was hard, very hard. But after a while, I got used to it … and now when I go to Egypt to visit, I feel just for a month or two, and then I want to come back here. My life is here now.”

Bakery serves Lebanese style baklava and other Middle Eastern desserts to customers from around the world and around the neighborhood.

The rich smell of butter and syrup wafts out the door as a steady stream of customers comes in to her bakery to buy the Lebanese-style baklava and other assorted pastries, which are made with ghee, a clarified butter, flaky phyllo dough, different syrups, some of them flavored with rosewater, and pistachios or walnuts.

“Every Arab house, or Egyptian or Lebanese house, usually around 5, we have the sweets with tea or coffee. Almost every house over there, every day,” said Dous.

And, she says, her most loyal customers are Indian. Some have even suggested she open a store in India.

Kulwinder Kaur of Phulkari Punjabi Kitchen, four miles south on Dequindre, says she regularly shops at the Mid-East Pastry Delight. “We Indians love our sweets,” she said, noting there are similarities between Indian and Middle Eastern cuisine, such as the use of ghee and the fact that the pastries are not overly sweet.

Malek Maatouk passed away three years ago and Kamilia Dous now runs the shop. Besides in-store sales, the bakery does a brisk mail order business, especially around the holidays. Son George Maatouk manages a second store in Orchard Lake. On Dequindre, adventures in ethnic food Coming next in the series at detroitnews.com/special-reports/ :