When Hien Le's Chinese eatery fizzled, she returned to her native country for lessons in Vietnamese cooking

Hien Le and Quyet Phan found success with a return to their roots in their restaurant, which serves traditional Vietnamese pho -- beef noodle soup -- and other regional favorites.

When Hien Le's Chinese eatery fizzled, she returned to her native country for lessons in Vietnamese cooking 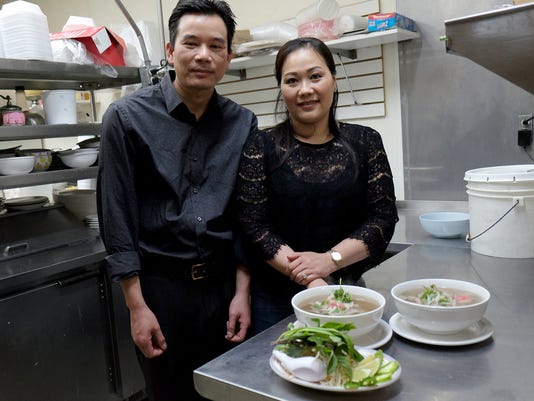 Last in a series on the many ethnic food businesses on Dequindre between 11 Mile and 17 Mile.

Hien Le and her husband Quyet Phan named their restaurant Pho Tai to bring them luck. Pho is a traditional Vietnamese broth with noodles and fresh vegetables now served all over the world. Tai means luck in Vietnamese.

They say their luck has improved since they moved their business to Dequindre south of 13 Mile and joined the flourishing Asian community in Madison Heights.

It also helped that they returned to their Vietnamese roots and the cuisine they grew up with.

They were both born shortly after the Vietnam War ended. Quyet Phan, whose father served the U.S. Army during the war, immigrated in 1997, landing in Seattle. He married Hien Le in 2004. The couple arrived in Detroit shortly thereafter and looked for a business to open.

She returned to her native country to learn the secrets of Vietnamese cooking.

Le approached a popular restaurant. “And then we pay money, and they just teach us how to cook,” she said.

“I think the pho is exactly the taste from back to my country. It’s nothing different. So if you come back to Vietnam, the pho here and the pho in Vietnam just the same. “

The basis for pho is beef bone, simmered in water for 14 or 15 hours to infuse the broth with the flavor of the marrow. Then more meat and spices are added.

Once the broth is cooked it is clarified, and different cuts of beef — sometimes cooked, sometimes thinly sliced and raw, are placed in large individual bowls, along with fresh thin rice noodles, sliced raw onions and cilantro. The hot clear broth is poured into the bowl, cooking the beef and onions and softening the noodles. It’s a meal in itself, usually served with a side plate of fresh basil, bean sprouts, slices of fresh jalapeno and wedges of lime that the diner adds to taste. 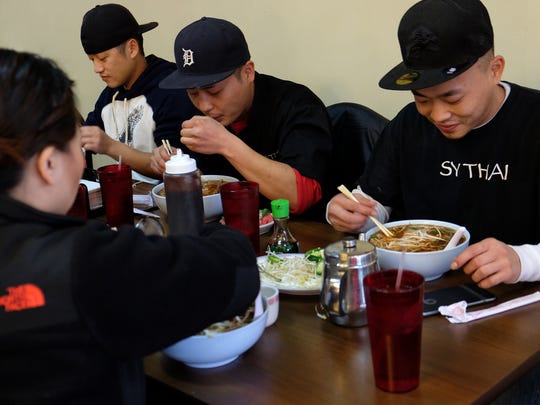 The immigrants who live and work around Dequindre do their best to find their feet and fit into their new country.

Hien Le and Quyet Phan have three children, one in high school and two in elementary school. Their eldest daughter was born in Vietnam, but her younger brother and sister were born in the U.S.

“I think the first one, she still understands Vietnamese, but the second one and the third one, they forget all about the Vietnamese language, so at home, they also speak English with us,” Le said, adding with a laugh that her kids are “so Americanized already.”

Margaret Wojciechowski of the American Polish Cultural Center says that recent immigrants like herself try to assimilate quickly to life in America, while those whose Polish ancestry goes back generations try to find more of their history and roots at the center. “They start learning (the) language, even though their parents even didn’t speak Polish. I was always amazed with that.”

There is a fair amount of cross-cultural mixing on Dequindre.

Kamilia Dous of Mid-East Pastry Delight gets her nails done at a Korean salon on 14 Mile and Dequindre. “Over there I meet a lot of different nationalities. … Arab, Chaldean, Korean, American. And we all talk to each other, we know each other. It’s like a gathering place for everybody,” she said.

Up and down the street, there is one common ingredient.

“Nothing brings people closer together than food,” said Sam Sater of International Foods. “It’s always like, ‘Can I meet you for a cup of coffee?’ ‘Let’s do lunch,’ or ‘Can we do dinner?’ So it’s always food that we gather ourselves around.”