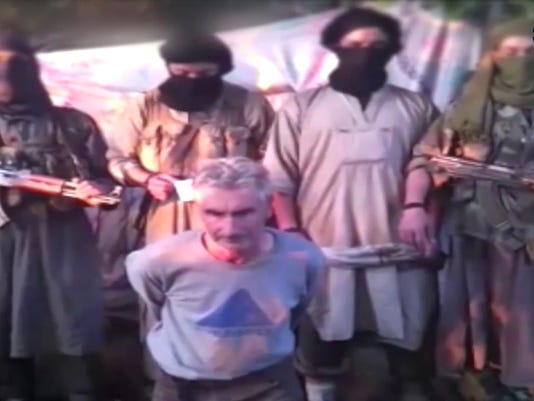 In this still image from video published on the Internet on Sept. 24, 2014, by a group calling itself Jund al-Khilafah, or Soldiers of the Caliphate, members of the group stand behind French mountaineer Herve Gourdel just before beheading him. (Photo: AP )

Paris — Algerian extremists allied with the Islamic State group have decapitated a French hostage after France ignored their demand to stop airstrikes in Iraq, according to a video released by a U.S. terrorism watchdog.

A group calling itself Jund al-Khilafah said after abducting Herve Gourdel on Sunday that he would be killed within 24 hours unless France ended its airstrikes against Islamic State fighters in Iraq.

The French government has insisted it will not back down. It would not immediately comment on the beheading video.

Gourdel was a 55-year-old mountaineering guide from Nice seized in mountains of northern Algeria.

The video resembled those showing the beheadings of two American journalists and a British aid worker in recent weeks, but instead of showing President Barack Obama, it showed French President Francois Hollande.

France started airstrikes in Iraq on Friday, the first country to join the U.S. military campaign against the Islamic State fighters there.

“Our values are at stake,” French Prime Minister Manuel Valls said Wednesday after hearing about the video. He would not comment further, but minutes earlier he insisted that France would continue fighting in Iraq as long as necessary.