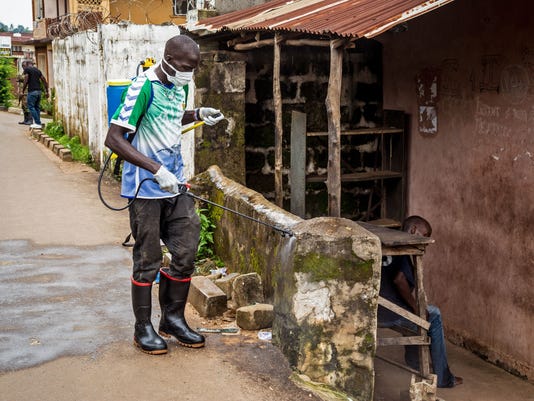 A health worker, left, sprays disinfectant around the area where a suspected Ebola patient sits before loading him into an ambulance in Freetown, Sierra Leone, Sept. 24, 2014. (Photo: Michael Duff , AP )

Freetown, Sierra Leone — Sierra Leone on Thursday took the dramatic step of sealing off districts where more than 1 million people live as it and two other West African countries struggled to control an Ebola outbreak that has claimed thousands of lives.

The newly declared quarantine areas mean that about one-third of the country’s 6 million people are now living in areas where their movements are heavily restricted. In parts of Sierra Leone and in neighboring Liberia where these cordons have been used in this outbreak, food prices have soared, some markets have shut and the delivery of goods has slowed.

“There is a desperate need to step up our response to this dreaded disease,” the Sierra Leone government said. “The prognosis is that without additional interventions or changes in community behavior, the numbers will increase exponentially and the situation will rapidly deteriorate.”

In other parts of Sierra Leone, including the capital, Freetown, homes will be put under quarantine when cases are identified, according to a government statement.

Two districts near the outbreak’s epicenter — Kenema and Kailahun — had already been isolated. In all, the movement of more than 2 million people is now restricted in Sierra Leone.

WHO said Thursday that a sharp increase of cases in the capital is driving the outbreak’s spread in Sierra Leone and also noted that the three districts that are newly cordoned off are experiencing increased infections.

Sierra Leone is one of the countries hardest hit by the Ebola outbreak sweeping West Africa that is believed to have killed more than 2,900 people, according to World Health Organization tolls published Thursday. The outbreak’s unprecedented scale and geographic spread have pushed governments to impose severe measures like the cordons, but the disease has continued to overwhelm efforts to contain it.

In an address to the nation on Wednesday night, President Ernest Bai Koroma put Port Loko, Bombali, and Moyamba districts under isolation with immediate effect, allowing only people delivering essential services to enter and circulate within these areas.

The outbreak has also hit Liberia and Guinea and is believed to have sickened more than 6,200 people. Senegal and Nigeria have also had Ebola cases, but it appears the disease has been contained in those countries.

In an effort to slow the disease’s spread, Sierra Leone imposed a three-day nationwide lockdown last week, during which 160 Ebola cases were found and teams described to households how to avoid Ebola, which is spread through contact with an infected person’s bodily fluids. That exercise revealed that the outbreak is worse than thought, the government said Thursday.

Liberia, the country hardest-hit by the disease, cordoned off a large slum in its capital Monrovia at one point to slow transmission.

On Thursday, frustrated residents of Monrovia gathered outside the city’s newest treatment center where patients sometimes had to wait for hours to be admitted.

“It is kind of pathetic to come and then see patients lying all on the ground and nobody to even see them,” said resident Abraham Sesay.