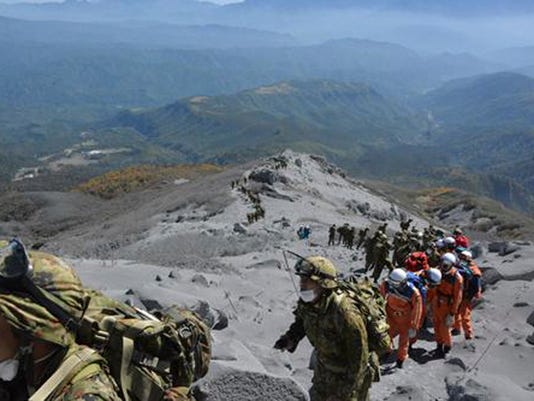 In this photo taken Sept. 28, 2014, and released by the Japan Ground Self-Defense Force (JGSDF), JGSDF personnel and firefighters climb the ash-covered slope, heading for the summit of Mount Ontake to rescue people who have been trapped in the mountaintop lodge during the eruption, one day after the volcano became active in central Japan. (Photo: AP )

Kiso, Japan — Five more bodies were found near the summit of a Japanese volcano on Monday, bringing the total presumed dead to 36, police said, as toxic gases and ash from the still-erupting mountain forced rescue workers to halt efforts to recover the victims.

Eight more bodies were airlifted off Mount Ontake before work on the ash-blanketed peak was called off around 1:30 p.m., said Naofumi Miyairi, a spokesman for the Nagano prefecture police.

Together with four victims brought down on Sunday, 12 bodies have now been recovered, leaving 24 near the summit. Exactly how they died remains unclear, whether from gases, suffocating ash, falling rocks or other causes.

Police said the latest victims were found near a shrine at the summit, the same area where other victims were reportedly found.

The bodies were flown to a nearby athletic field, the surrounding forested hills contrasting with Mount Ontake’s ash-gray peak in the background, a reduced plume still emerging from its crater.

The bodies were then taken to a small wooden elementary school in the nearby town of Kiso, where they were being examined in the gymnasium.

Family members of the missing waited at a nearby municipal hall.

More than 200 soldiers and firefighters, including units with gas detection equipment, were part of the search mission near the peak, said Katsunori Morimoto, an official in the village of Otaki.

The effort was halted because of an increase in toxic gas and ash as the volcano continued to spew fumes, he said.

“It sounds like there is enormous ash fall up there,” he said.

The rescuers reported a strong smell of sulfur, Morimoto said.

Saturday’s eruption was the first fatal one in modern times at the 10,062-foot mountain, a popular climbing destination 130 miles west of Tokyo. An eruption occurred in 1979, but no one died.

Japanese media reported that some of the bodies were found in a lodge near the summit and that others were buried in ash up to 20 inches deep.

The mountain erupted shortly before noon at perhaps the worst possible time, with at least 250 people taking advantage of a beautiful fall Saturday to go for a hike. The blast spewed large white plumes of gas and ash high into the sky, blotted out the midday sun and blanketed the surrounding area in ash.

Hundreds were initially trapped on the slopes, though most made their way down by Saturday night.

About 40 people who were stranded overnight came down on Sunday. Many were injured, and some had to be rescued by helicopters or carried down on stretchers.

Japan’s Fire and Disaster Management Agency tallied 40 people who were injured, including three seriously, and said it was trying to determine if any people were still missing.

Survivors told Japanese media that they were pelted by rocks from the eruption. One man said he and others went into the basement of a lodge, fearing that the rocks would penetrate the roof. He said he covered himself with a thin mattress for protection.